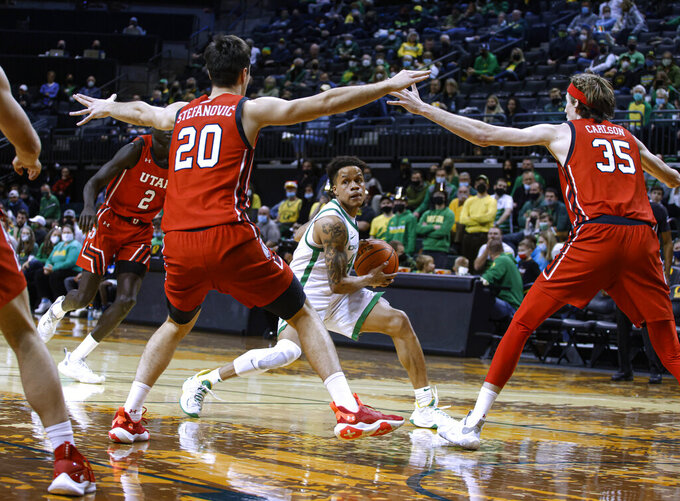 EUGENE, Ore. (AP) — Will Richardson scored 23 of his career-high 26 points in the second half, Jacob Young had a season-high 22 points and Oregon rallied from a nine-point second-half deficit to beat Utah 79-66 on Saturday night.

The Ducks made just one of their first 10 field-goal attempts and trailed most of the first half before Both Gach hit a 3-pointer to give Utah (8-6, 1-3) a 40-31 lead early in the second. Richardson and Young combined to score 15 points in a 17-2 run over the next 3 1/2 minutes that gave Oregon the lead for good.

Richardson, who finished 9-of-12 shooting and hit a career-high five 3-pointers, scored Oregon's first nine points in an 11-4 spurt that made it 67-57 when Young drove the left side of the lane and dropped a wrap-around pass to N’Faly Dante for a two-hand dunk with 5:22 to play. Young hit a 3 about 2 1/2 minutes later to push the lead into double figures for good.

Branden Carlson led the Utes with 15 points, Marco Anthony scored 14 and Lazar Stefanovic added 10. David Jenkins Jr., who scored 1,194 points in two years at South Dakota State before leading UNLV in scoring at 14.8 points per game last season, fouled out with 7 minutes to play and was held scoreless for the first time in his career. The redshirt junior went into the game as Utah’s second-leading scorer at 12.7 per game while leading the Pac-12 in both made 3s (37) and 3-point field-goal percentage (.435).

Oregon seemed to crank up its defensive intensity in the second half, pressuring Utes ball handlers into turnovers and scoring 20 of the Ducks' 22 fast-break points. They shot 18 of 28 (64.3%) from the field and 6 of 8 from 3-point range while scoring 50 points after halftime.

The Ducks are 20-2 against Utah under coach Dana Altman and have won eight straight in the series.