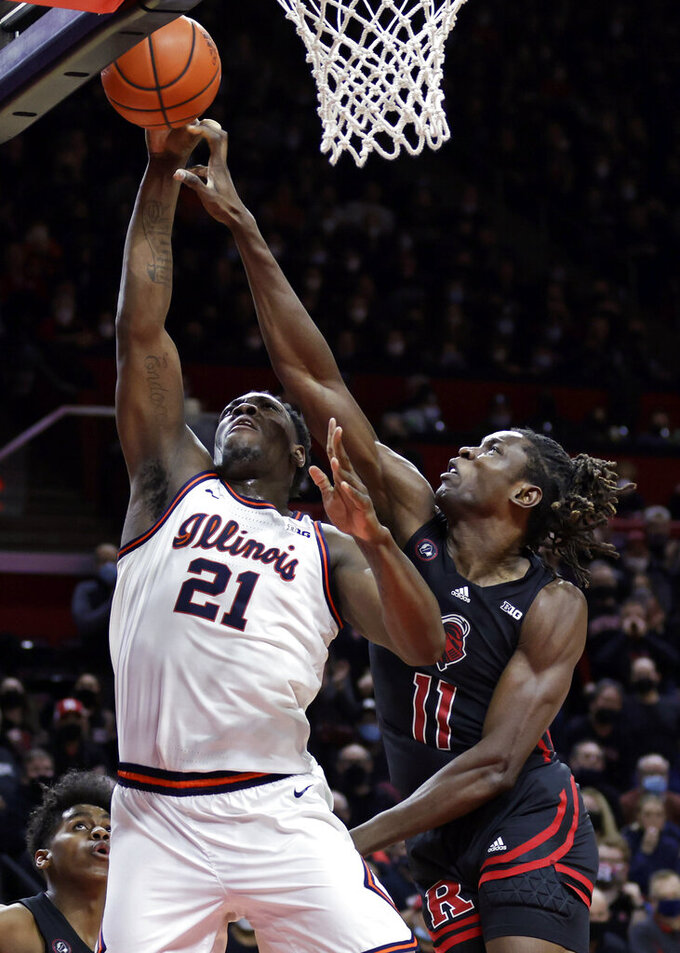 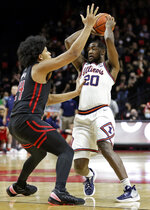 PISCATAWAY, N.J. (AP) — Rutgers isn’t just beating ranked teams, they are dominating them with a relentless hard-nosed style of play.

No. 12 Illinois became the fourth straight ranked team to fall to the Scarlet Knights, getting beat 70-59 on Wednesday night. Rutgers' run is almost sure to get Steve Pikiell's team a ranking for the first time this season and a berth in the NCAA Tournament for a second straight season.

Pikiell wasn't ready claim anything after the game, saying he will wait under March 13 for the official NCAA Tournament announcement.

Cliff Omoruyi had 15 points, 13 rebounds and a reverse alley-oop dunk in a game-breaking second run for Rutgers.

“All the credit in the world to them,” Illinois coach Brad Underwood said. “That was that was something my team hasn’t seen in a long, long time ... They deserve all the credit. We had no life, no spirit and no fight.”

The winning streak against ranked teams is the longest in school history for the Scarlet Knights (16-9, 10-5 Big Ten). There's a chance to continue the streak with games next week at No. 5 Purdue and home against No. 15 Wisconsin. The last team to win four straight against ranked teams in the regular season was Michigan State in 2019-20.

Ron Harper Jr. added 16 points and eight rebounds and had the assist on Omoruyi's second-half dunk. It was the second basket in a 12-0 run that ballooned the Scarlet Knights' lead to 47-28. Paul Mulcahy added 13 points and Caleb McConnell had 11.

“We’re just trying to continue to get better,” McConnell said. “There’s no ceiling.”

Center Kofi Cockburn was the only consistent threat for Illinois (18-7, 11-4), finishing with 20 points and 10 rebounds. Trent Frazier added 11 points and RJ Melendez had 10.

“My key going into the game was Rutgers has played harder than every single opponent they played in this winning streak,” Underwood said after seeing his team outworked. “It’s not rocket science, it’s not great execution.”

The Illini shot 38% from the field, including 6 of 23 from 3-point range. But they missed their first 13 shot attempts and were never in the game.

Rutgers improved to 13-2 at home, and its biggest lead was 60-37 with about six minutes to play.

Rutgers' recent run has combined good shooting and defense, and that was evident in the early as the Scarlet Knights opened the game with a 17-7 spurt, featuring six points by Harper. Cockburn had all the Illini points inside.

Illinois couldn't find its shooting touch in the first 20 minutes, shooting 32% and connecting the last of its 14 3-point attempts.

Rutgers led 33-24 at half, a season-low first-half point total for Illinois.

Harper seemed to jam a hand late, but Pikiell had no information on his injury.

The Scarlet Knights received votes in the most recent poll and there is no reason they should not be ranked next week. Illinois had won five of six and will slip a little.

llinois: Big man Cockburn got no support against Rutgers, something that can’t happen consistently if coach Brad Underwood’s team wants to make a postseason run.

Rutgers: The Scarlet Knights had some head-scratching losses early in a season where expectations were high after getting to the NCAA Tournament last season for the first time since 1991. The expectations have returned and there is no question this is a tournament team.

Illinois: At No. 19 Michigan State on Saturday.