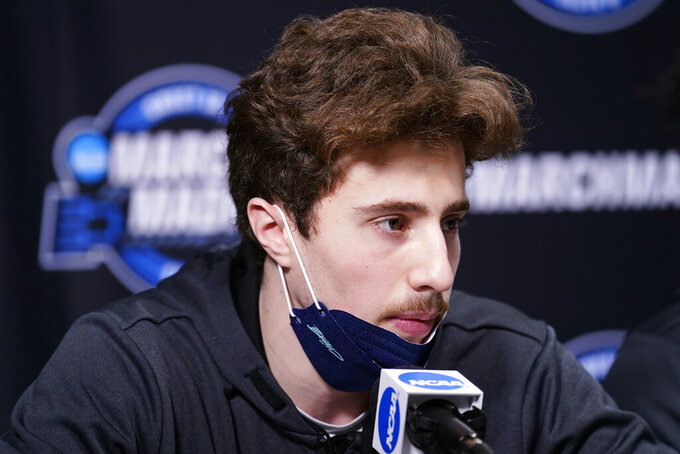 PHILADELPHIA (AP) — Doug Edert could use a few wet wipes to keep all his free chicken wing sauce out of a wispy mustache so mythical it has its own Twitter account.

Around tiny Saint Peter’s, students wear fake mustaches in honor of the guard who has plucked the Peacocks — yes, the 15th-seeded, who-the-heck-are-the Peacocks? — from out of obscurity and into the Sweet 16 of the NCAA Tournament.

Edert, well, he’s earned more fame — and tenders — out of one basketball weekend than most All-Americans have all season. His last two Instagram posts before March showed the guard facial hair-free and writing motivational quotes. Fast forward to this month’s madness, and there’s Edert clutching a conference championship trophy, hamming it up for the cameras with his tongue wagging, and one finger-licking payoff — Edert about to dig into dozens and dozens of chicken wings and fries, an endorsement perk from an NIL deal signed this week.

There’s also a link to buy from his “ Dougie Buckets ” T-shirt and sweatshirt collection.

Edert has cashed in on the bracket and the bottom line.

“The week has been crazy,” Edert said.

Crazy is just one word for the aura around Jersey City and beyond for the 15th-seeded Peacocks (21-11) as they navigate their way through 15 minutes of fame at the same time they game-plan to face Purdue (29-7) in an East Region semifinal.

Coach Shaheen Holloway has his own distraction to downplay as he’s emerged as a top candidate for the coaching vacancy at his alma mater, Seton Hall. His blueprint for building a winner isn’t necessarily found on his resume — it’s slapped on a billboard along a New Jersey highway.

The mantra from Holloway: “I got guys from New Jersey and New York City. You think we’re scared of anything?”

The Peacocks are putting the “fun, baby, fun” back in the tournament.

“Obviously, with the media attention it’s good and bad,” Holloway said Thursday. “But this team, they’ve been good.”

Saint Peter’s started with a stunner when it knocked off No. 2 seed Kentucky, where coach John Calipari’s roughly $8-plus million salary dwarfs the Peacocks’ entire athletic budget, and then advanced 95 miles south to Philadelphia after a win over seventh-seeded Murray State.

They are the third No. 15 seed ever to reach the Sweet 16. Florida Gulf Coast in 2013 and Oral Roberts last year both failed to reach the regional final.

The bracket-busting from the team in the 3,200-seat gym had it going national. Holloway pitched the Peacocks on “Good Morning America” and the upset earned laughs on late-night TV talk shows.

“Of course, people have already started their spring cleaning,” Jimmy Fallon joked the day of the UK win. “For example, today everyone threw out their March Madness brackets.”

Fallon cracked that even Saint Peter’s players had busted their own brackets: “We had Kentucky.”

Hey, not everyone is a #StrutUp believer. Saint Peter’s still hasn’t won over the bettors. Third-seeded Purdue is a 12 1/2-point favorite, according to FanDuel Sportsbook, easily the largest spread of the eight semifinal games. The Peacocks’ element of surprise is no more.

“It’s just basketball. I don’t think you should go into any game being intimidated by anybody,” forward KC Ndefo said.

The Peacocks punted on the “us against the world” attitude that so many underdogs embrace and invited all new fans to come along for the ride. The team even needed a police escort as it said goodbye to about 400 fans at a campus rally.

“With the last two years with COVID and everything, it’s been so down and so dark,” Holloway said. “Right now is just a time where, especially in Jersey City and New Jersey, everybody is rallying around us. It’s been tremendous. The support has been unbelievable.”

And why not? The Peacocks have won nine straight games, kind of unbelievable for a team that was 7-7 at one point this season and had a 27-day COVID break. They didn’t play from Dec. 18 to Jan. 14 and have gone 18-5 since, coming out of the hiatus a whole new team.

“We had a chance to have a mini-camp to get ready and get back,” Holloway said. “Since the COVID pause this team has been a different team. We’ve kind of been locked in and followed the goal, and the goal was always be a defensive-first team.”

The win streak grew faster than the bushy mop of hair on Edert’s head.

Edert and his ’stache have blown up social media, though he’s found getting a verified account on Instagram is harder than beating the Wildcats. Saint Peter’s demanded Twitter “ Verify us ” (it got the blue checkmark), then it called ESPN announcer Jay Bilas a “coward” when he re-seeded the bracket and put the Peacocks 16th.

But some questions about the Peacocks remain: Is Edert a traditional wing or boneless guy? Blue Cheese or ranch?

And he’s convinced the Peacocks aren’t done yet.

“The only thing that matters right now is beating Purdue,” he said.