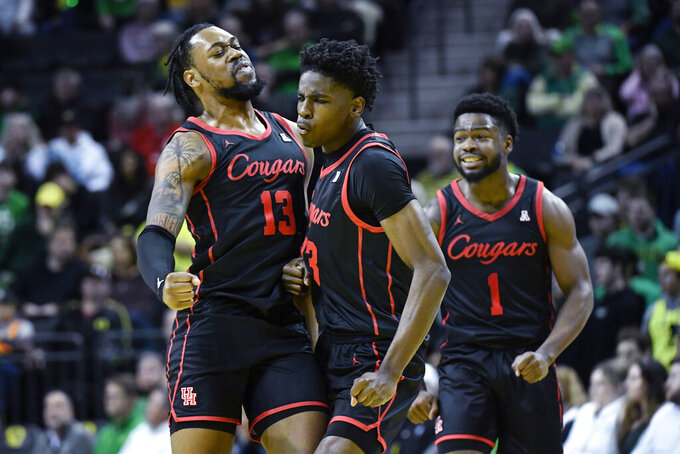 Freshman Terrance Arceneaux scored a career-high 15 points while Jamal Shead added 13 and Jarace Walker had 10 for Houston (5-0), which was 11 for 22 on 3-pointers.

“Great road win,” Houston coach Kelvin Sampson said. “It is still early and there is not one part of the game we are not going to get better at. It was our fifth game, not our 25th. … We didn’t play great, but this is not the time to play great, it’s November. November is about winning and leaning and that is what we did tonight.”

Arceneaux and Walker are true freshmen who played in their first true road game.

“It was very exciting,” Arceneaux said. “I am glad to be able to do it with these guys. It is a great experience for me learning from the older guys. I hope we can continue this streak we have going on and get better as a team.”

“When one team shoots 11 for 22 on 3-pointers and the other shoots 3 for 22, it is not hard to figure out the difference in the game,” Oregon coach Dana Altman said.

Oregon lost junior guard Keeshawn Barthelemy to a left leg injury in the first half and Altman said he was unsure of the severity of the injury. The 6-foot-2 transfer from Colorado was averaging 10.7 points and 2.7 assists in the first three games.

Houston had a 31-24 halftime lead before Guerrier scored seven points in the first five minutes of the second half to pull Oregon to 36-33. The Ducks trailed 41-38 following five straight points by Dante, but Houston followed with a 14-2 run.

Oregon pulled to 60-54 on two free throws by Richardson with 2:36 left to play before Sasser followed with a 3-pointer for the Cougars.

“Our defense was outstanding,” Sampson said. “Any time you go on the road and hold a team to 38-percent shooting in their gym, that’s pretty good. Our ball movement was good in the second half and we took care of the ball. Ten turnovers on the road, when you defend and take care of the ball and offensive rebounding was good in the second half, we had a lot of second-chance opportunities.”

Houston: The Cougars could move up to No. 2 in the country after Gonzaga lost to Texas earlier in the week. Houston heads home for the next four weeks with five of six games on its own court plus a neutral-site game against St. Mary’s in Fort Worth, Texas.

Oregon: The Ducks missed an opportunity for a resume-building win against the Cougars, but should have other big-time opportunities ahead. The Ducks head to Portland for the Phil Knight Invitational, where they open against UConn and could also face No. 1 North Carolina, No. 18 Alabama or No. 25 Michigan State. Oregon will likely continue to be without transfer guards Brennan Rigsby and Jermaine Couisnard, both considered potential starters who have yet to play this season due to injury.

Oregon: The Ducks face Connecticut in the first round of the Phil Knight Invitational on Thursday.