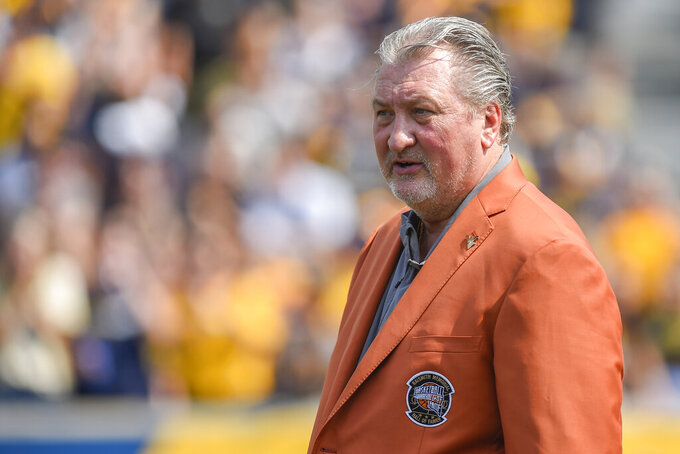 FILE - West Virginia men's basketball coach Bob Huggins is recognized for his induction into the College Basketball Hall of Fame during an NCAA college football game between West Virginia and Towson, Saturday, Sept. 17, 2022, in Morgantown, W.Va. West Virginia's roster underwent a makeover after the Mountaineers finished 16-17 a year ago. With the addition of multiple transfers, coach Bob Huggins says he has more players who he thinks can score baskets. (AP Photo/William Wotring, File)

MORGANTOWN, W.Va. (AP) — Bob Huggins looks over his revamped roster at West Virginia and already likes what he sees from some newcomers.

“The ball goes in,” Huggins said. “The ball actually goes in. It's great. It's more fun to watch that.”

West Virginia finished 16-17 last season and lost 10 players, mostly to the transfer portal, including the top four scorers. The Mountaineers were last in the Big 12 and had the league's worst shooting percentage, scoring defense and rebounding margin.

The only returning player with significant playing time is guard Kedrian Johnson, who started all but two games. Yet several incoming transfers have spent plenty of time on the court.

“We’ve got a chance to be good. Not good but really good," Huggins said. "We’ve got more guys I think who can score.”

Guard Erik Stevenson is at his fourth school and has already taken on a leadership role.

“He's the alpha of the group,” Huggins said. "He’s just so competitive. He raises the level of our practice because of his competitiveness.”

Stevenson started every game at South Carolina a year ago, averaging 11.6 points, after stints at Washington and Wichita State. Forward Tre Mitchell averaged 8.7 points and started 17 games at Texas. He also started 43 games at UMass.

“They’re guys who are going to be a lot more comfortable. They’ve played in very competitive leagues," Huggins said. "If anybody ought to be ready to go, it ought to be those guys.”

Despite the forgettable end to the 2021-22 season, it's been good ever since for the 69-year-old Huggins, who was inducted into the Basketball Hall of Fame last month.

And the accolades aren't done. Huggins enters the season with a 916-399 career record. With his 921st win he'll pass Jim Calhoun into third place all-time among Division I coaches, behind only Jim Boeheim of Syracuse and recently retired Duke coach Mike Krzyzewski.

“They all came here to play," Huggins said. "I think it’s been really good from a competitive standpoint. It’s a really good group of guys.”

A year ago Matthews left West Virginia after three seasons. He said he barely saw his parents when COVID-19 restrictions were in place during the 2020-21 season.

When Washington was holding its Senior Night ceremony, Matthews said he closed his eyes and imagined being back in Morgantown, where he said a player's last home game is treated as “the highest thing in the world.”

“I love everything about being here,” he said. “The fan base. Just the way we play, the style of play. How loud the Coliseum gets when you got a sold-out game. The roads trips when you go places and the fans at the other schools hate you because you're the hardest-playing team in the nation. Those kind of things is stuff that's always stuck with me since the first year that I was here, and I just love that.”

Jimmy Bell gives the Mountaineers a beefy presence in the paint at 6-10, 285 pounds. Mohamed Wague, at 6-10 and 225 pounds, is agile and the team's best shot blocker, Huggins said. Both are junior college transfers. In addition, Stevenson, Matthews and Mitchell averaged more than four rebounds per game last season.

West Virginia opens the season at home Nov. 7 against Mount St. Mary's. The Mountaineers will play Purdue in a Thanksgiving weekend tournament where they also could meet No. 2 Gonzaga and No. 7 Duke. There also is a Jan. 28 home game with No. 15 Auburn. The Big 12 opener is Dec. 31 at Kansas State.