Zeigler leads No. 19 Tennessee over Vanderbilt 73-64 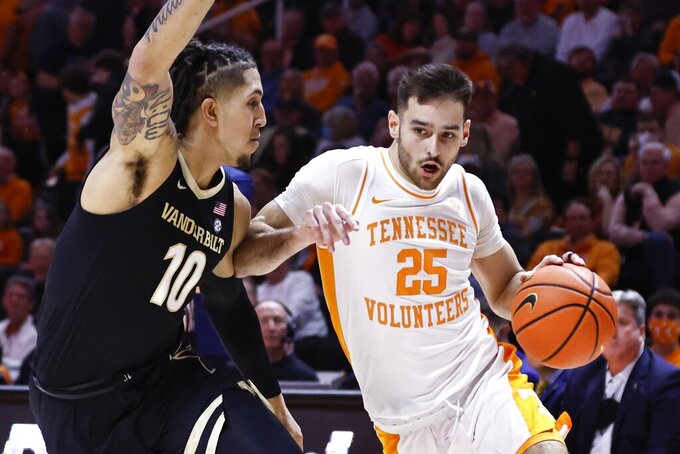 From there, Tennessee's defense held Vanderbilt scoreless for more than four minutes to get some breathing room.

“We had to come together and do what we had to do on defense,” Zeigler said. “They hit us pretty hard (in the second half). We looked at each other and got it done.”

“We didn't run a very good offense,” Vols coach Rick Barnes said of the Commodores' recovery. "We didn't play good defense either. At the end, we were able to make a push.

“Give (Vanderbilt) credit. They run a terrific offense. They know what they're looking for and they execute it.”

Myles Stute hit a pair of 3-pointers in the 11-0 run right after halftime. Scotty Pippen, Jr., who led Vanderbilt with 23 points, scored six straight points to get the difference to one.

Stute finished with 17 points and Rodney Chatman had 11 for the Commodores.

“We had our opportunities,” coach Jerry Stackhouse said. “We dug the hole in the first half. We gave ourselves a fighting chance.”

Tennessee had a 15-4 advantage in offensive rebounds which translated into a 17-3 edge in second-chance points.

“Early in the season, rebounding was a major concern,” Barnes said. “We expect our guards down there to clean it up.”

Josiah-Jordan James connected on just 2 of 14 shots from the field, but he hit 9 of 10 free throws, finished with 14 points, and also led the Vols with 10 rebounds.

“Jo's played a lot of minutes,” Barnes said. “He's a guy who allows us to do a lot on the defensive end.”

John Fulkerson added 12 points, including a critical three-point play when Vanderbilt whittled the Vols' lead to a point.

“John's moving much better,” Barnes said of the super-senior who battled COVID during tdhe season. “On defense, he knows what we have to get done.”

“I didn't like our disposition to start the game,” Stackhouse said. “We can't ease into games. We need more urgency on the road. We'll learn from this.”

Vanderbilt: Pippen came into the game as the No. 2 scorer in the SEC (No. 51 in the country) at 18.7 ppg. ... The Commodores are battling with Ole Miss, Missouri, South Carolina, Texas A&M and Alabama for places among the top 10 in the 14-team SEC standings, which would mean they would avoid playing on the first night of the league tournament.

Tennessee: Finding an answer for the absence of 6-foot-8 Olivier Nkamhoua (ankle surgery) will be imperative to the Vols’ success. In a win over Mississippi State, 6-10 freshman Brandon Huntley-Hatfield and 6-11 freshman Jonas Aidoo got the call. ... Tennessee has now won 13 straight home games and seven SEC games in a row. ... The Vols average 10.1 steals a game, fifth in Division I. ... The Vols are in the hunt to finish in the SEC’s top four, which would give them a double-bye in the conference tourney.

Vanderbilt: Things don’t get any easier for the Commodores.They travel to No. 1 Auburn on Wednesday night.

Tennessee: The Vols entertain No. 5 Kentucky on Tuesday night.