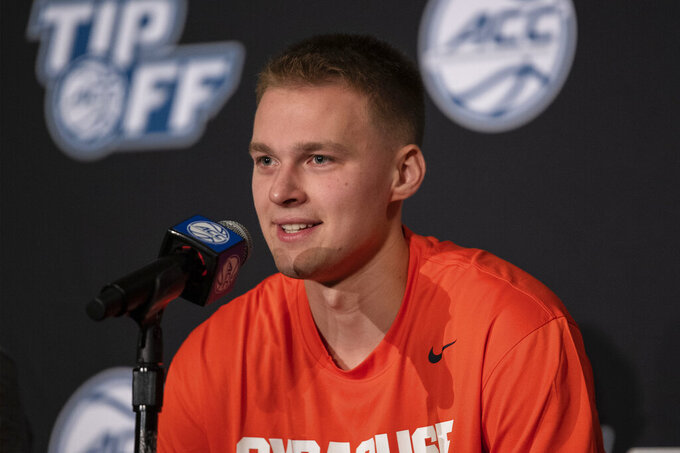 Phillips, who took over for retiring John Swofford earlier this year, said the discussion is part of an overall assessment of the ACC's structure that includes staffing along with the responsibilities and roles of the office.

“To exclude the location piece just would have been a disservice to what I was asked to do, and that’s lead an entire conference,” Phillips said Tuesday during the league's preseason men's basketball media day.

Phillips said when he interviewed for the commissioner's job he spoke to the presidents of every ACC school and the vast majority of them inquired about the future of the conference headquarters, which has been in Greensboro since the league's 1953 founding in the city.

The ACC’s North Carolina roots have become a topic of discussion as the league has expanded in recent decades to 15 basketball members stretched along the entire Eastern seaboard and west into Kentucky and Indiana. That has included holding the ACC Tournament in Brooklyn in 2017 and 2018, while 54 of the other 66 events have been held in North Carolina — including 28 in Greensboro.

The ACC has hired an outside agency, the Newmark Group, to help evaluate its current situation and said right now the conference is in the “first phase” of the assessment process.

“The assessment right now is just of Greensboro, either staying where we’re at in Greensboro in the same building or another part of Greensboro,” Phillips said. “The presidents will decide if there is a phase two, which would mean we would start to talk with other cities.”

Duke men's basketball coach Mike Krzyzewksi said that while Greensboro has been an “unbelievable” home for the ACC and the people have been great, but he supports what Phillips is doing.

“I think what Jim Phillips did is what a new CEO should do,” said Krzyzewksi, who is retiring after this season. "You assess everybody and the organization, you assess where we're at. And so him looking at that is the right thing to do. It will make everybody better.”

Phillips said the league is still trying to pursue a deal with Comcast to carry the ACC Network in key markets still missing within the league footprint, including areas in Virginia, Georgia and South Carolina.

Reaching carriage deals is key for wider distribution of the ESPN-partnered network, which launched in 2019 to help the league close a growing financial gap with its power-conference peers.

The ACC doesn't have its usual number of star players heading into the season, but they do have Syracuse's Buddy Boeheim, who has cashed in on his recent nickname of “Buddy Buckets” through the NIL process.

Boeheim was one of the stars during the first weekend of last year's NCAA Tournament, helping the Orange reach the Sweet 16. Against West Virginia, he could be heard saying “I'm a bucket!” after draining a long 3-pointer from the top of the key.

Boeheim admits he plays with an attitude.

“I wouldn’t have said that if I didn’t put the work in and felt like I was one of the hardest workers out there," said Boeheim, who averaged 23 points over his final 10 games last season. “Knowing that I've worked so for this, I have to have to go out there a little chip on my shoulder because not many people thought I would be doing this or be in this position.”

Krzyzewski said “nothing is torn or broken” in Griffin's knee and he hasn't needed surgery. He said it just a matter of Griffin rehabbing and getting back on the floor, which he hopes will be in a matter of weeks.

“I can’t give you a timeline, but he’s off crutches and doing well but still has a lot of therapy to go,” Krzyzewski said of Griffin, a 4-star recruit who was ranked 29th in the country by ESPN in the class of 2021.

It's been awhile since Boston College was a factor in the ACC and the Eagles have not been to the NCAA Tournament since 2009, but new coach Earl Grant is looking to change all of that. Grant takes over after seven seasons at the College of Charleston and players say he has brought an immediate infusion of energy to the program.

“I want to run,” Grant said emphatically. “We are going to defend and rebound, and then I want to run. If we can get a shot in the first eight (seconds) I will take it. If we don't, I want to work for something great and run some motion plays."

Eagles guard Makai Ashton-Langford said he knows everyone will be overlooking Boston College this season, but that's fine with him.

“That definitely pushes us a lot more and makes a lot hungrier knowing that people don't expect much from us,” Ashton-Langford said.