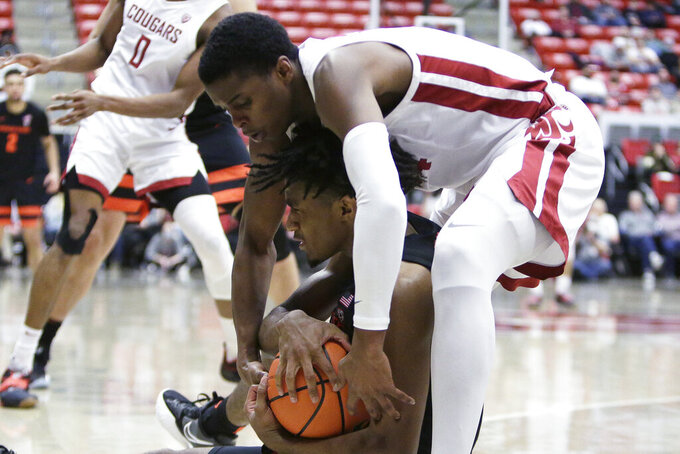 Bamba hit two 3-pointers and scored eight in the first half, but the Cougars (17-13, 10-9 Pac-12 Conference) went scoreless over the final 3:09 and settled for a 32-32 tie at intermission. Oregon State didn't have a basket after Maurice Calloo's three-point play gave the Beavers a 28-20 lead with 6:36 left. Calloo made four foul shots to tie the game.

Neither team got any kind of separation in the second half, until Tyrell Roberts sank two free throws and Bamba followed with a 3-pointer to give the Cougars a 56-49 lead at the 8:10 mark. Oregon State (3-26, 1-18) got back within two, but Bamba hit from deep, Noah Williams had a basket and Efe Abogidi sank two free throws then hit a 3-pointer to cap a 10-3 run for a 66-57 lead with 3:46 left.

WSU pushed its lead to 11, but Dexter Akanno hit two 3-pointers and Jarod Lucas added another in a 10-1 run to pull the Beavers within 69-67 with 26 seconds remaining. Roberts, a 93% free-throw shooter on the year, made two with 14 seconds left to cap the scoring.

Flowers had 14 points for the Cougars, while Roberts scored 10. Abogidi pitched in with nine points, eight rebounds and five of WSU's nine blocks.

Calloo totaled 20 points and seven rebounds for the Beavers, who have lost 16 straight. Akanno added 12 points, while Lucas scored 11.

WSU closes out regular-season play at home against Oregon on Saturday. Oregon State travels to play Washington on Saturday to close out the regular season.