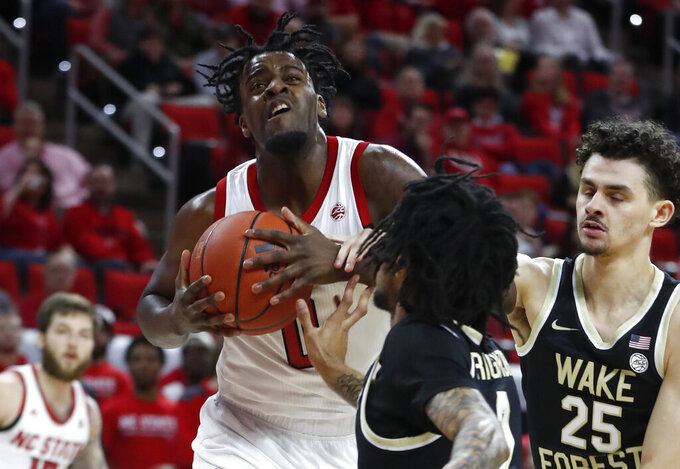 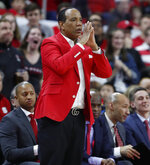 RALEIGH, N.C. (AP) — Braxton Beverly found some relief in a season of pain.

Beverly scored all 16 of his points during a 24-4 run in the first half to help North Carolina State beat Wake Forest 84-64 on Friday night.

“We needed it, and he needed it,” N.C. State coach Kevin Keatts said.

Beverly has been dealing with sore back all season, aggravating the injury in a collision against the Citadel on Dec. 22. He has been in such discomfort that he stands next to the bench when he’s out of the game, and he averaged just 3.9 points in the previous seven contests.

But Beverly looked like his old self against Wake Forest (13-17, 6-14). He made all six of his field goal attempts, including four 3-pointers, during N.C. State’s game-breaking spurt.

Markell Johnson had 13 points and 10 assists for N.C. State. The Wolfpack shot 62% from the field in the first half en route to a 44-31 lead at halftime.

C.J. Bryce scored 11 points, and Devon Daniels and Danny Dixon had 10 points each for N.C. State.

The Wolfpack scored 22 points off 15 Wake Forest turnovers, with Beverly contributing a season-high three steals. He stripped the ball twice inside from 7-foot Olivier Sarr in the first half.

“Braxton was in his kill mode,” Johnson said. “I love it when he’s not thinking about anything and he’s playing his game.”

Brandon Childress scored 19 points and Sarr had 14 points to lead Wake Forest, which trailed by at least 10 points throughout the second half.

Jahcobi Neath added 12 points and Chaundee Brown had 10 points for the Demon Deacons.

Wake Forest: The Demon Deacons missed out on a chance to beat Duke, North Carolina and N.C. State in the same season for the first time since 2014. They dropped to 1-9 on the road in conference play, failing to win more than one ACC road game for the ninth season out of the last 10. “The game was decided very early tonight,” Wake Forest coach Danny Manning said. “N.C. State came out early on in the game scoring on all three levels, and we weren’t able to stop them.”

N.C. State: The Wolfpack needed this win to keep alive their chances for an NCAA Tournament at-large berth. N.C. State missed the tournament last year after finishing 9-9 in league play during the regular season, and the team is in a similar situation after posting another .500 conference record. “It was a great win for us,” Bryce said. “You hate to put it in the hands of the committee, but it seems that we’re at that point again.”

The Wolfpack played without freshman Manny Bates, the ACC’s leading shot blocker. Bates sat out with what Keatts deemed “a little knee bruise.”

“He probably could have played, but I wanted to hold him out,” Keatts said.

Seniors Johnson and Bryce started, as usual, in their final regular-season home game. They were joined in the starting lineup by Dixon and Pat Andree, a pair of graduate transfers.

Bryce bounced back from a scoreless first half in which he sat out the final 14:39 after getting his second foul. Dixon entered the game with 14 points all season, but he reached double figures on 5-of-6 shooting in 11 minutes.

Wake Forest: The Demon Deacons will play on Tuesday in the first round of the ACC tournament, where they have lost their opening game in 10 of the last 12 years.

N.C. State: The Wolfpack will play on Wednesday in the second round of the conference tournament, which they last won in 1987.