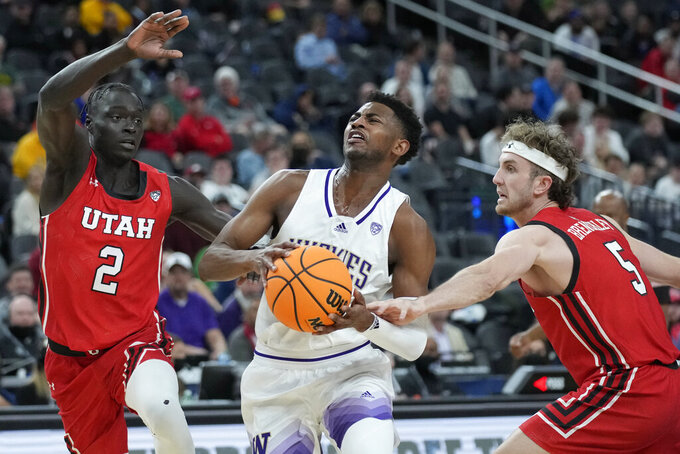 Washington's Daejon Davis (11) drives through Utah's Both Gach (2) and Jaxon Brenchley (5) during the second half of an NCAA college basketball game in the first round of the Pac-12 tournament Wednesday, March 9, 2022, in Las Vegas. (AP Photo/John Locher)

LAS VEGAS (AP) — Terrell Brown Jr. finished with 22 points and five assists, Jamal Bey scored 19 and Washington pulled away in the second half for an 82-70 victory over Utah in the first round of the Pac-12 Conference tournament on Wednesday night.

Brown knocked down 9 of 19 shots and has scored in double figures in every game this season for the sixth-seeded Huskies (17-14). Bey was 3 of 6 from 3-point range. Cole Bajema pitched in with three 3-pointers and 16 points off the bench, while Emmitt Matthews Jr. sank two 3s and scored 10. Washington shot 48% overall and 44% from beyond the arc (8 of 18).

Bajema had 11 points and Brown scored 10 to help the Huskies take a 40-37 lead at halftime.

Utah tied the score at 44 on a rebound basket by Branden Carlson with just under 17 minutes remaining, but Bey answered with a 3-pointer and Brown hit back-to-back jumpers in a 7-2 run that gave Washington a 51-46 lead with 14:22 left and the Huskies pulled away from there.

Washington had only five turnovers while forcing 16, outscoring the Utes 21-2 in points off turnovers.

The Huskies advance to play No. 3 seed Southern Cal in the quarterfinals on Thursday.