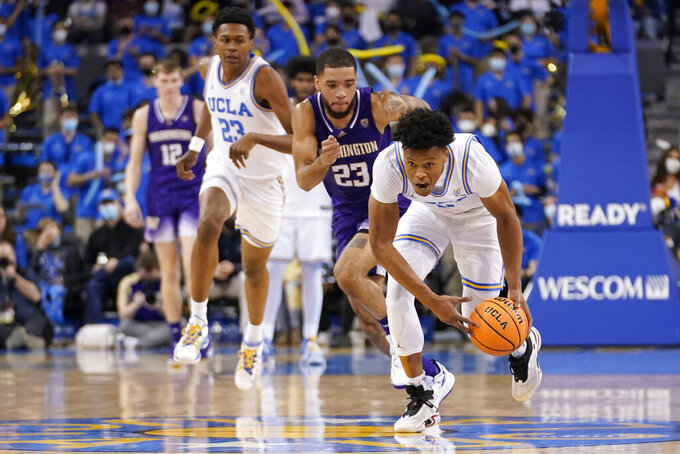 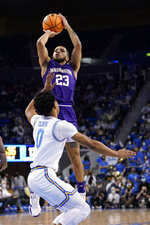 LOS ANGELES (AP) — UCLA coach Mick Cronin is scared to see trainer Tyler Lesher for fear of what new injury information he might have. But even in the midst of Cronin's most injury-plagued season in 19 years as a college coach, the Bruins have managed to keep winning.

Minus two starters Saturday night, they were still too much for Washington.

Jaylen Clark and David Singleton posted career highs in scoring as No. 13 UCLA shook off a slow start in a 76-50 victory.

Clark, starting for the second consecutive game, led the Bruins with 25 points and Singleton came off the bench to score 20, including six 3-pointers.

UCLA (19-5, 11-4 Pac-12) won its second straight by at least 20 points, but did it shorthanded. Johnny Juzang missed the game due to a sore hip after falling off his scooter, while Cody Riley was unavailable. Riley missed eight games earlier this season due to a sprained left MCL.

“It’s like someone has a voodoo doll sticking pins in my team,” Cronin said. “I can’t get a guy from his apartment to Mo Ostin (the Bruins' practice facility) without falling off his scooter. I don’t know who is out every day. I’m scared to pick up my phone. Every time (Lesher) comes near me, it’s bad news.”

Cronin hopes to have his full lineup available by the Pac-12 Tournament in three weeks, but one thing giving him some reassurance is that his roster is showing plenty of depth.

Clark got the call in place of Juzang, who came into the night second in the conference in scoring. Clark followed up an 18-point effort in Thursday's win against Washington State — his first start of the season — by going 12 of 16 from the field in 31 minutes.

Myles Johnson, who started with Riley out, had seven points but was a bigger factor on the defensive end with 13 rebounds and three blocked shots.

“I am getting an opportunity and trying to make the most of it. We fill our roles but when we need to step up, we do,” Clark said.

UCLA struggled early with the revised lineup, missing its first eight shots and falling behind 4-0 before Jules Bernard's leaning jumper in the lane with 14:46 remaining in the first half started an 11-2 run to put the Bruins on top for good.

In the first half, the Bruins went 14 for 25 from the field after missing their first eight shots as they built a 37-25 halftime lead. Singleton had 14 points, going 4 of 6 on 3-pointers.

“I knew in the zone defense there were going to be holes. I wanted to run to the open spots," Singleton said. “Tonight they needed me and I got the job done.”

UCLA started the second half on a 17-2 run, including six points by Singleton and five by Clark, to put the game away. The Bruins' largest lead was 37 with seven minutes remaining.

Washington coach Mike Hopkins told his team before the game the key was to get points off turnovers and not allow second-chance points. The Bruins had 24 points off 14 Huskies turnovers while Washington scored just four points off seven UCLA turnovers.

The Bruins also controlled the offensive boards and had a 21-11 advantage in second-chance points.

“Defensively, they pushed us off our spots, and we didn’t keep moving. You can’t just play against a team like this and go 1-on-1,” Hopkins said. “They do a good job of being physical, and they compete.”

BACK IN THE LINEUP

Cronin said he expects Riley and Juzang to be available for Monday night's game against Arizona State. It will be the Bruins' third game in five days and it comes during a stretch with six in 12 days.

Washington: The Huskies lead the Pac-12 in steals but had only four against the Bruins.

UCLA: The Bruins should move up a couple of spots in the rankings after a pair of convincing wins over the Washington schools.