Clark's 18 lift No. 3 Virginia past Florida St in ACC opener 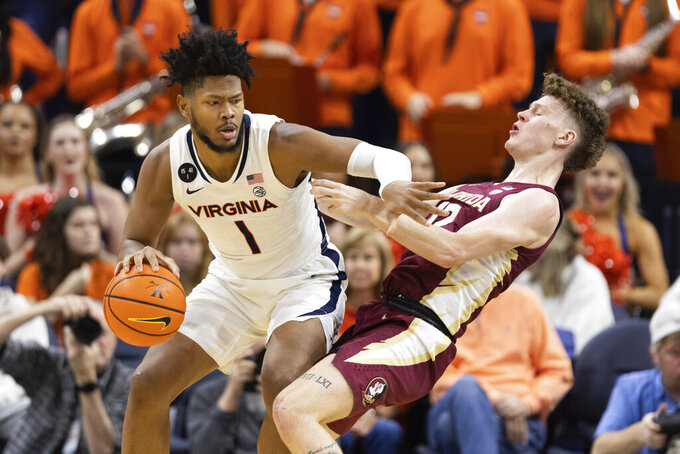 Virginia's Jayden Gardner (1) commits a foul against Florida during the first half of an NCAA college basketball game in Charlottesville, Va., Saturday, Dec. 3, 2022. (AP Photo/Mike Kropf) 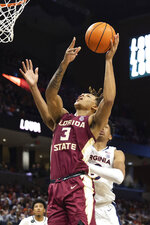 “I'll be glad when you go,” Hamilton said he told Clark, who scored 18 points Saturday. “He smiled. See, I gotcha, though. That's what he was thinking.”

“He didn’t lose his poise. And for a little guy, his strength is his IQ. You know, we can talk about his dribbling skills and hitting his free throws and big shots, but he makes great decisions. He doesn’t really get rattled that much. He’s like a coach on the floor,” Hamilton said.

“I mean, he impacts every game he plays in because of his high basketball IQ. ... He's almost flawless as a point guard and one of those guys that don’t come along very often," he said.

The Cavaliers (7-0) had to overcome poor shooting (18 of 51, 35.3%) to win their 15th straight Atlantic Coast Conference opener, but needed a 22-9 run to start the second half to take control. They turned a 22-21 halftime deficit into a 43-31 lead, and then had to hold on at the end as the Seminoles (1-9) tried to avoid their fifth consecutive loss.

The start to the second half was very important, Clark said, because “to get that big enough lead you can get, is it makes it easier on yourself later in the stretch.”

Florida State scored the next six points after Virginia's run, then didn't score again for five minutes as the Cavaliers rebuilt their advantage. The Seminoles got within 55-50 on Matthew Cleveland's jumper with a minute left, within four on Darin Green Jr.'s jumper with 40 seconds left, and within after Caleb Mills' acrobatic three-point play with 7.5 seconds left.

Reece Beekman, who hit two free throws with 34 seconds left for Virginia, hit two more with 7 seconds to play, allowing the Cavaliers to hold on.

Last year, it was Cleveland’s buzzer-beating jumper that gave the Seminoles a 64-63 victory at John Paul Jones Arena, something Virginia coach Tony Bennett reminded him of, also in the handshake line.

“I said, `You’re the guy that made the shot last year against us, right?'” Bennett said. “And he smiled and I said, I thought it might be coming down to something like that again.”

Green scored 17 points for the and Cleveland finished with 11.

Jayden Gardner added 10 points and seven rebounds for the Cavaliers, including a tip-in with 3:07 left after Florida State closed to 51-43.

The victory was just the second for Virginia in the last six meetings and marked the 21st time in the last 22 matchups the Cavaliers held FSU under 70 points.

The first half was more physical than finesse with Virginia called for nine personal fouls while making just six field goals. The Seminoles had seven field goals and six fouls.

Florida St.: The Seminoles are younger than expected. They continue to play without freshman Baba Miller, who is suspended for the first 16 games of the season for getting an improper travel benefit, and Brown transfer Jaylan Gainey, the two-time Ivy League defensive player of the year who will miss the season with a knee injury.

Virginia: Even when their offense is clicking, the Cavaliers always count on their defense to keep them in games, and it worked in this one. The Seminoles finished 21 of 64 from the field (33%) and Virginia finished with four steals and 10 blocks, four by Kadin Shedrick.

The Seminoles return home to play Louisville next Saturday.