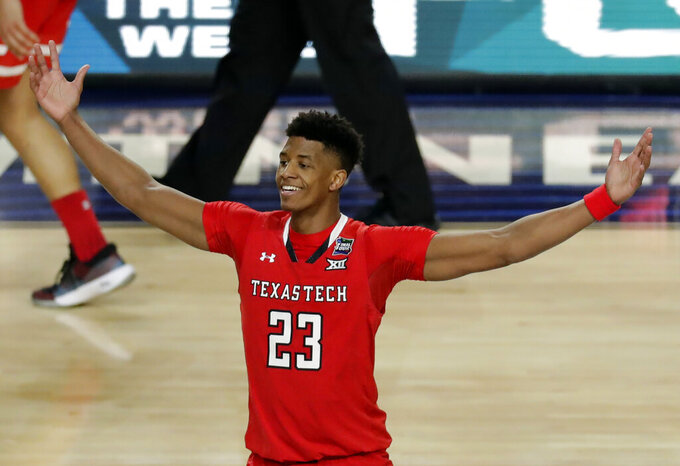 MINNEAPOLIS (AP) — Jarrett Culver knew Texas Tech desperately needed him to make a big leap after a solid freshman year so he charged full-speed into an offseason determined to refine and expand every element of his game.

De'Andre Hunter needed a little longer to do the same at Virginia, even by spending a year as a redshirt watching from the sidelines.

Yet here they are in Minneapolis, a pair of players who have blossomed into bonafide NBA prospects for teams a win away from becoming a first-time national champion. Consider it proof — or maybe simply a needed reminder — that college players can still take a slightly longer path to becoming top-tier NBA prospects amid the college game's starry-eyed infatuation with one-and-done talents.

"You can do that," Culver said Sunday, the day before his Red Raiders meet Hunter's Cavaliers in the national-title game. "The one-and-dones, they're very talented guys coming out of high school and they get looked at a lot. My route was just a little different. I don't know how long I'll be in college. I just know if you put the work in and set your goals, you can do whatever you set your mind to."

Look, no one is going to confuse Culver and Hunter for flashier players with tantalizing upside like Duke's Zion Williamson this season or Arizona's Deandre Ayton a year earlier. Yet Culver, a 6-foot-5 sophomore, is the undisputed first (maybe second and third, as well) offensive option with enough versatility to lead the defensively inclined Red Raiders in scoring, rebounding and assists.

As for Hunter, the 6-7 redshirt sophomore has developed into a more assertive scorer with 3-point range. Yet it's his defensive versatility that stands out with his ability to defend inside or out — he even checked talented North Carolina freshman point guard Coby White late in a February road win — as the Division I defensive player of the year for the National Association of Basketball Coaches.

Check any mock draft, and their names are easy to find. Both are frequently listed among the top 10 picks if they entered the NBA draft after the season ends. And it's likely they'll be matched up against each other at least during some during Monday night's championship game.

"They'll both be (high) if they both come out, but this is not a great year for the draft," ESPN analyst Jay Bilas said. "You've obviously got the super talent in the top five, the top four. But who knows where they'd go in another year? I think they're first-round talents in most any year.

"That's what's going to cause a number of players to come out this year: they want to go higher, they would go higher this year than perhaps in another one. Not these two, these two are legit."

That's not to say either has been flawless in the NCAA Tournament.

Culver averaged 21.5 points through the four-game push through the West Region, but was quiet nearly all Saturday night before scoring seven of his 10 points in the final three minutes to help Texas Tech hold off Michigan State's rally.

As for Hunter, he had a rough two-game set in the regionals by making just 8 of 23 shots (34.7 followed by an ineffective first half in Saturday's first national semifinal against Auburn before playing far more assertively after the break.

"I think he's hard on himself," Virginia coach Tony Bennett said. "If he's missing shots or not helping his team, he puts a lot on himself. We talked about it: 'Be free, man. Go after this. We need you.'"

Consider it the next phase of Hunter's growth as a player.

"I just try to live up to my my own expectations," Hunter said. "I know how hard I work, I know the things I do every day. It gets kind of frustrating at times but I just try to get back to doing what I do and playing the game free."

When asked, both players point to the other's ability to affect the game at both ends of the court. Their descriptions could have easily applied to themselves.

Fitting, considering they've taken a similar route to what they hope is a net-cutting finish on the way to the NBA.