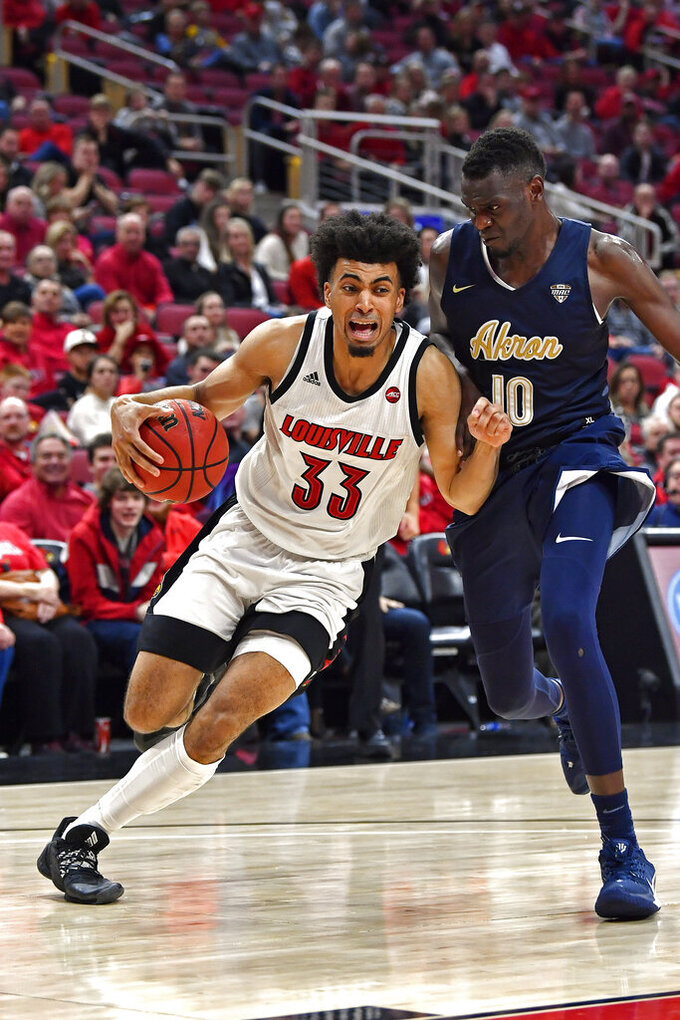 Duke coach Mike Krzyzewski set the record for wins coaching a No. 1 team when his top-ranked Blue Devils knocked off California and Georgetown on back-to-back nights to win the 2K Empire Classic.

That’s because the Blue Devils (6-0) solidified their tight grip on the No. 1 spot in The Associated Press men’s basketball poll Monday. They received 53 first-place votes from the 65-member media panel that regularly covers college basketball, easily out-distancing second-place Louisville.

“There’s really no words. You can’t put that feeling into words,” said Duke sophomore Tre Jones, when asked about his Hall of Fame coach. “No one knows that feeling unless you do play for him.”

Of course, Krzyzewski would rather dwell on the progress of his team — which faces Stephen F. Austin on Tuesday night and Winthrop on Friday — than another record on his resume.

“We felt starting practice that we could be good defensively with Tre there and depth. We’ve really devoted most of our practice time to defense,” Krzyzewski said. “As a result, I think we’ve gotten tougher. We've also spent a lot of time in rebounding. We’re finding ourselves offensively.

“We’re going to continue to try to find out about ourselves.”

The Cardinals avoided Akron’s upset bid Sunday to remain No. 2 in the poll, receiving seven first-place votes. Michigan State was third with four No. 1 votes and Kansas was fourth, setting up a showdown between the two heavyweights if they advance to the finals of the Maui Invitational.

“I think this is my fourth time with Kansas. We’ve kind of been around and kind of got a feel with what works from that standpoint,” Jayhawks coach Bill Self said of the Hawaii tournament, “but that doesn’t have anything to do with works during the game.”

Maryland jumped North Carolina to round out the top five, while Virginia received the only other first-place vote and was seventh. Gonzaga, Kentucky and Ohio State filled out the top 10.

The reigning national champion Cavaliers needed a late comeback to beat Arizona State in the Hall of Fame Tip-Off Tournament on Sunday night. They wound up leaning on freshman Casey Morsell and their stingy defense to counter a 19-0 run by the Sun Devils and escape with a 48-45 victory.

Baylor was the biggest mover after knocking off then-No. 17 Villanova behind 22 points from Jared Butler at the Myrtle Beach Invitational. The Bears moved up five spots to No. 19 this week.

Tennessee climbed three spots to No. 17 after routing Alabama State.

The Gators were the only newcomers to the poll this week, and they joined Villanova as the only teams in the poll with two losses. They lost to Florida State and UConn but have won their last three.

Texas dropped out of the poll after losing to Georgetown in the 2K Empire Classic semifinals, though the Longhorns rebounded to breeze past Cal in the consolation game.

The Seminoles were the first team out of the Top 25, a mere two points behind Xavier. Then came a wide gulf before St. Mary’s, Oklahoma and Butler — the latter of whom could meet in the Hall of Fame Classic if they reach the championship game Tuesday night.

Kansas and Michigan State are heavy favorites to reach the Maui Invitational title game, while Wisconsin and Auburn highlight the Legends Classic in New York.

The most intriguing tournament could be the Battle 4 Atlantis in the Bahamas, where the Tar Heels are joined by Gonzaga, No. 11 Oregon and No. 13 Seton Hall. Unranked Michigan, which also received votes for the AP Top 25, is also in the field at Imperial Arena beginning Wednesday.