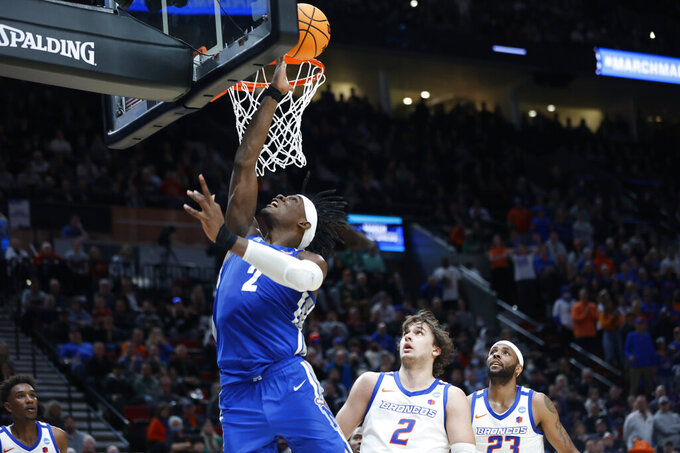 PORTLAND, Ore. (AP) — While the second-round matchup between top overall seed Gonzaga and No. 9 seed Memphis is a terrific one of preseason Top 25 teams for college basketball fans to enjoy, there’s another group perhaps even more thrilled.

When the Bulldogs and Tigers meet on Saturday, the game will feature two expected future NBA lottery picks with Gonzaga’s Chet Holmgren and Memphis’ Jalen Duren on the court together.

It’s the matchup NBA executives were dreaming about when the brackets were released last weekend and the possibility of Gonzaga and Memphis facing off in the West Region became a possibility. Two lottery picks and two freshmen of the year in their respective conferences both with a special set of skills and an ability to take over a game.

“I’m pretty sure he could be in high school playing or something, he’s a lottery pick, so it’s just a credit to him, the hard work he’s put it,” Gonzaga’s Drew Timme said of Duren. “He’s just a talent, obviously. It’s going to be a fun match-up for sure.”

Their positions among the top draft analysts have varied through the season, but there’s no question that both Holmgren and Duren — assuming each declares as expected — will hear their names called pretty early when the draft takes place in June.

Before he was able to lure Duren to Memphis as part of the top recruiting class in the country, Tigers’ coach Penny Hardaway said he spent the better part of 18 months trying to land Holmgren’s commitment. Even after it was clear Holmgren was going elsewhere, Hardaway stayed in contact.

“I knew he wasn’t coming to Memphis, but I just kind of built the relationship, just FaceTiming him and talking to him and just to understand who he is,” Hardaway said. “You talk to him personally you’d know he’s all about competing. He’s about excellence, he’s tough, even though he’s a small frame, he’s tough mentally and physically. Along with his skill set and who he is, what we see every game, I marvel.”

Those are heady words coming from someone with the playing pedigree of Hardaway. But it also fits with the unique skills that Holmgren brings and what makes teams at the next level so eager to see how he’ll fit in the professional game.

Holmgren sat near the top of every draft board before he ever put on the Gonzaga uniform for the first time. The 7-foot unicorn — as described by others — has the passing, ball handling and shooting range of a guard, the size to thrive as a rebounder, and game-altering shot blocking that has put him on the radar of NBA teams for several years.

Duren, who only turned 18 last November, arrived at Memphis with similar expectations to Holmgren. Duren might not possess the unique skills of Holmgren, but he’s a 6-foot-11, 250-pound force who looks like he could step onto an NBA floor right now.

“It’s daunting. They are extremely athletic and big and play with force and that’s going to be a real challenge for us,” Gonzaga coach Mark Few said.

While the matchup of lottery potential will get plenty of attention, it’s unlikely they’ll be matched up with regularity. There will be moments when they find themselves facing off, but their styles have significant differences. Holmgren brings more of a mix as a shot blocker on defense but lets Timme do the bulk of the interior work for the Bulldogs.

Duren lives primarily on the inside using his size and strength to his advantage.

“I feel like he’s outstanding right now,” Memphis guard Lester Quinones said of Duren. “He feels like he just wants to grab every single rebound that comes off the rim, and I love that about him, and I love that he’s in that mindset because that’s why we need him at this crucial point in the season.”

The Gonzaga-Memphis winner will face the winner between No. 4 seed Arkansas and No. 12 seed New Mexico State playing in Buffalo, New York. The Razorbacks reached the Elite Eight last season before falling to eventual national champion Baylor and looked impressive in their tournament opener shutting down Vermont.

While Arkansas gets plenty of attention for its ability to score, its defense has been noteworthy. The Razorbacks have held 12 of their past 19 opponents under 40% shooting and against Vermont held top scorer Ryan Davis scoreless over the final 13 minutes.

The Razorbacks have another big task in trying to shut down New Mexico State’s Teddy Allen after he scored 37 points in the Aggies’ first-round win over Connecticut.

“He presents a lot of problems because of his ability to draw fouls. He has unlimited range,” Arkansas coach Eric Musselman said.

Hardaway said he expects guard Alex Lomax to play against Gonzaga despite a sprained ankle suffered in the first-round win over Boise State.

As for top freshman Emoni Bates, Hardaway said to expect a few more minutes against Gonzaga. Bates played a handful of minutes against Boise State in his first action since Jan. 27 due to a back injury. Hardaway said Bates has a restriction on minutes but could play a little more against the Zags.

“He looked great in the first half, and I think he gained confidence from that. You might see him a little bit more,” Hardaway said.