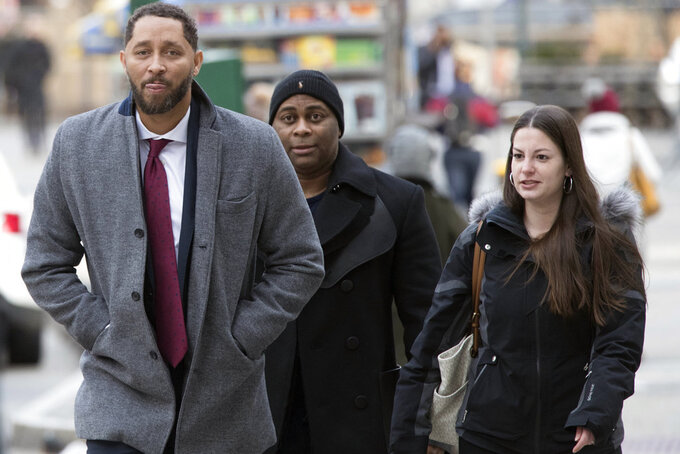 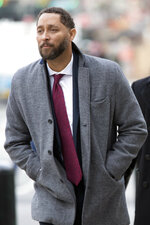 NEW YORK (AP) — A former assistant basketball coach for the University of Southern California pleaded guilty Wednesday to conspiracy to commit bribery, admitting he accepted $4,100 in cash to steer players at the school to certain financial advisers and business managers.

Tony Bland's plea in Manhattan federal court makes it likely he will spend little or no time in prison after he is sentenced April 2.

"On July 29, 2017, I met with others in Las Vegas, Nevada, to discuss my participation in the scheme and received a payment of $4,100," he told U.S. District Judge Edgardo Ramos.

Bland admitted to federal authorities after his September 2017 arrest that he took a cash payment to steer players to advisers and managers and that he knew it was wrong, Assistant U.S. Attorney Eli Mark said.

Bland, 38, of Los Angeles, was among four assistant coaches charged in the crackdown on college basketball recruiting corruption.

Prosecutors say the coaches teamed up with a top Adidas executive and others to trade hundreds of thousands of dollars in bribes to influence star athletes' choice of schools, shoe sponsors, agents and even tailors.

In October, a Manhattan federal court jury convicted three men of fraud charges for channeling secret payments to the families of top-tier basketball recruits to influence their choices of schools, apparel companies and agents.

More than two dozen schools have been tainted by the scandal since the 2017 arrests, for everything from paying for meals to six-figure payments to recruits' families.

Duke, Oregon, Louisville, North Carolina State, Creighton and Texas were among the schools mentioned in testimony during the October trial.

Bland had been preparing for an April trial before working out his plea deal last month with prosecutors. In the deal, Bland pledged not to appeal any sentence of six months or less in prison.

Prosecutors alleged in court papers that Bland, in return for a bribe payment, promised that he "definitely can get the players. ... And I can definitely mold the players and put them in the lap of you guys." They said he was paid a $13,000 cash bribe.

Last month, NCAA President Mark Emmert said a new independent enforcement body that would adjudicate major infractions cases could be in place by August, as part of a reform package to curb some of the seedy recruiting practices.

The panel, which would include business leaders and former politicians, was among reforms recommended by a commission led by former Secretary of State Condoleezza Rice.

Outside the courtroom, a relaxed and good-natured Bland declined to comment except to say "Happy New Year" and shake the hand of a reporter.

Defense attorney Jeffrey Lichtman called it a "very tragic sad ending for somebody who's given so much to so many people."

Lichtman said he could not fault prosecutors for trying to force change to college basketball, which he said had been relying too long on a "very broken, antiquated system."

"If the NCAA is unwilling to police themselves ... somebody's got to do it," he said.

"This is a long and winding road that will ultimately lead to construction of new rules," Lichtman said.

As for his client, he said Bland was "looking to get on with his life" after a prosecution that "drives a stake into the heart of his career."

Bland was an assistant coach at San Diego State University from 2009 to 2013 before he moved to USC, where he was made an associate head coach, second in line to head coach Andy Enfield, in 2014. In college, Bland played basketball for two years at Syracuse University and then transferred to San Diego State.

Lichtman would not speculate as to whether Bland, who was on a trajectory to become a head coach someday, could ever coach again.

"He came from nothing and he rose to the pinnacle of his profession," the lawyer said.