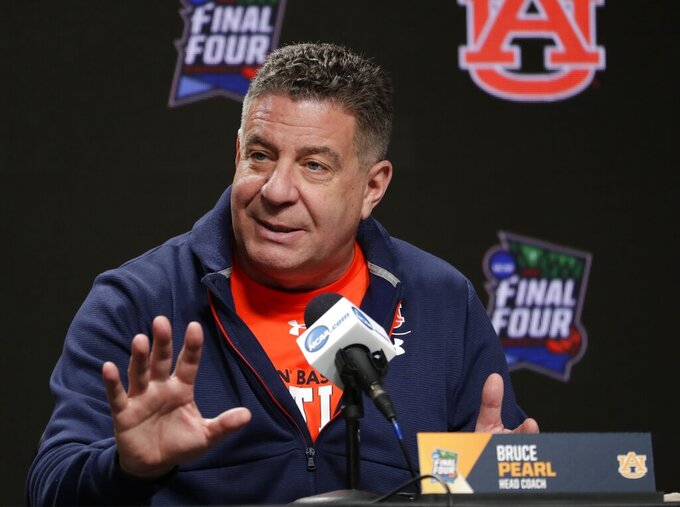 MINNEAPOLIS (AP) — One team's coach got kicked out of the sport for three years, and two of his assistants have been named in bribery scandals. Another team's coach is the most high-profile name in an athletic department scarred by its handling of a massive sex-abuse scandal.

Few would argue Auburn's Bruce Pearl and Michigan State's Tom Izzo shouldn't be at the Final Four. But some of the problems they've faced in their past offer sobering reminders about issues that can't be erased by a magical run through March Madness.

"I knew what I knew, and I knew all that I didn't know," Pearl said Thursday, when asked about the troubles enveloping his assistants. "So therefore, I was comfortable that if we stayed the course, that we were going to be fine."

Auburn is more than fine as it gets ready for Saturday's national semifinal against Virginia.

But at around the same time the Tigers were revving up for what turned into the program's first trip to the Final Four, former assistant Chuck Person was pleading guilty to conspiracy charges for accepting bribes to steer NBA-caliber players to a financial adviser. That same week, Auburn placed Person's replacement, assistant Ira Bowman, on administrative leave while it investigated allegations that he was involved in a bribery scheme at his previous job at University of Pennsylvania.

While Pearl, the 58-year-old coaching lifer, hasn't taken offense to those who might question his judgment for hiring those coaches, he's been a little more prickly with those who want to relive his past.

He was fired at Tennessee in 2011 for bringing a recruit to a barbecue at his house — a violation made worse by the fact he lied about it, and asked others to do the same. It branded him with a three-year NCAA "show cause" penalty — the equivalent of being completely kicked out of basketball.

Auburn took a chance as the sanction was expiring. Pearl bristled a bit — then later apologized for bristling — at a question at the start of the tournament asking if he wondered if he'd ever get another chance.

"So, I basically have been coaching my whole life. And so you're going to ask me a question about the three years I wasn't coaching?" Pearl said.

Like it or not, it's part of his resume. His son, Steven, who serves as an assistant for Auburn, said his dad always wanted to get back into the game.

"It was just a matter of where," Steven Pearl said. "Do you have to jump into a mid-major and work your way back up, or does someone like Auburn take a chance on a coach like that and bring him back in?"

For Izzo, it was never a matter of being welcomed in, but rather, whether he might be looking for a way out.

Michigan State has been the epicenter of the scandal involving Larry Nassar, the former team doctor who sexually abused hundreds of gymnasts and other female athletes. Though Izzo says he didn't know Nassar, the scandal put every facet of Michigan State's athletics program under the microscope.

Izzo came under scrutiny for not properly dealing with members of his program accused of sexual assault. In detailing some of those cases, an ESPN report linked Izzo and football coach Mark Dantonio to Nassar in a graphic with the title "Hidden Secrets."

In the end, no criminal charges were filed. The NCAA has cleared Michigan State, and both Izzo and the program were deemed to have handled the cases properly.

"It wasn't about what happened, it was about a picture that will go down the rest of my life as the lowest part of my life, to be on there with a pedophile like I was on there with," Izzo said last fall.

Despite that, the Nassar scandal has left an indelible taint at Michigan State. The athletics director, the university president and that president's replacement are all gone. Michigan State has settled lawsuits by the gymnasts to the tune of $500 million.

When the words "Michigan State" come up in the headlines these days, they're every bit as likely to be about the Nassar scandal as anything Izzo and his basketball program are accomplishing.

Nobody would've blamed the coach for leaving, either for the NBA or for a comfortable retirement.

But he preferred to stay, in the hopes he could be part of the solution at Michigan State.

"We've been through a lot here," Izzo said earlier this week, noting the support the team has received for its run. "It's part of the process of people just expressing the platform we have, and what it can do in a positive way. And if I can be a small part of it, that's as good as it gets."