Freshmen Banchero and Griffin lead No. 9 Duke rout of Irish 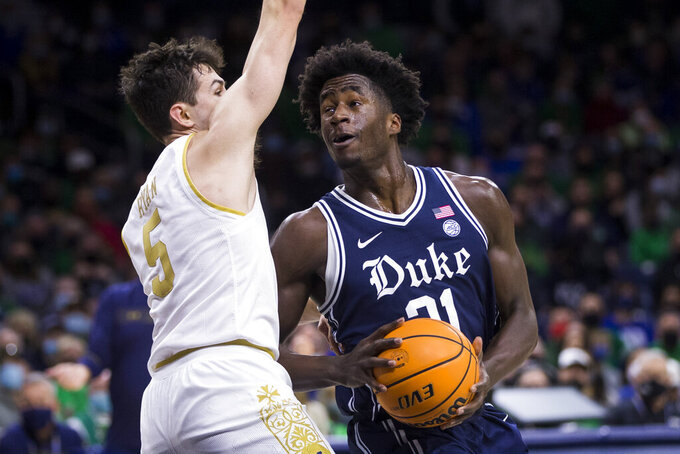 SOUTH BEND, Ind. (AP) — In his last visit with his Duke basketball team to Notre Dame’s Purcell Pavilion. coach Mike Krzyzewski couldn’t have been more pleased with the defensive effort of his No. 9 Blue Devils.

“We played really good defense, and to me that was the story of the game,” Krzyzewski said after freshman Paolo Banchero scored 21 points, classmate A.J. Griffin added 13 and each had a team-high nine rebounds as Duke handed Notre Dame its first home loss of the season in a 57-43 Atlantic Coast Conference rout Monday night.

The Blue Devils (18-3, 8-2 ACC) pulled into a first-place tie with idle Miami with their fourth straight victory for Krzyzewski, who dominated almost from the start, especially on the boards against his former protégé, Mike Brey. Notre Dame, which entered the game 9-0 at home this season with victories over Kentucky and North Carolina, saw its four-game winning streak end and fell to 14-7 overall and 7-3 in the ACC.

“If you would have told me they would have scored 57 in our building,” Brey said, “I figured we’d have escaped or come close to it. You’ve got to give credit to their defense. We missed a bunch of layups early that kind of make you feel like you can believe, and then we were digging out of a hole.”

The 6-foot-10, 250-pound Banchero, who entered the game leading the ACC in scoring at 18.9 points a game and was second in rebounding with 9.4 per game, echoed his coach’s sentiments about his team’s defensive effort which limited the Irish to just 27.9% shooting (17 of 61).

“We knew they were a great 3-point (shooting) team so we wanted to run them off the line,” said Banchero. “With our bigs, we wanted to protect the paint as well. We had a good game plan coming in.”

“We didn’t perform the way we wanted to offensively even though it was a low-scoring game,” said grad transfer Paul Atkinson Jr., the only Irish player in double figures with 14 points who also had nine rebounds.

Leading scorers Blake Wesley and Dane Goodwin, who were each averaging 15 points or more this season, were held to six and zero points on a combined 3-of-22 shooting, including 0-for-5 in 3-pointers. Goodwin, a senior guard who had scored at least one point in 86 straight games, had entered the game with 20 double-digit scoring efforts this season.

The game was the makeup of a Jan. 1 game postponed by COVID concerns in the Duke program, and Notre Dame led just once at 2-0.

Duke: The Blue Devils opened a 13-point halftime lead, 27-14, despite shooting just 37.5 percent (12 of 32) from the field. That’s because Duke out-rebounded the Irish 29-19 behind seven rebounds by John and six by Banchero, who had seven points in the first half.

Notre Dame: Brey’s Irish looked anything but like a second-place ACC team in falling behind 27-14 at halftime. “It was disappointing,” Brey said. “I know they are disappointed. I was thinking we’re going to get going in the second half. They had 27 at halftime and we were really ugly on the offensive end. The stuff we missed around the basket was very deflating.”

Duke remained No. 9 in the weekly Associated Press Top 25 poll released earlier Monday, the only ACC team ranked. Miami and Notre Dame were among the other schools receiving votes.

Brey, who was a Duke assistant under Krzyzewski from 1987-1985, including the 1991 and ’92 teams that won the first of his five NCAA titles, saluted his former boss during a halftime video. The game was a sellout – Notre Dame’s first home sellout since Duke visited here in 2019 with freshman sensation Zion Williamson and won handily, 83-61. Among those in the crowd of 9,149 was former Notre Dame coach Digger Phelps, who is second to Brey on the all-time wins list for men’s basketball, and football pro and college Hall of Famer Jerome Bettis, who has returned to campus 20 years after his final season to finish his undergraduate degree and sat in the student section.

“Mike was a key guy in us building the program at Duke,” Krzyzewski said. “I call him the Final Four assistant — six Final Fours and two national championships. Having him and (Tommy) Amaker with me was magical.”

Duke: After playing its third game in the last seven days, the Blue Devils ends a three-game road swing Saturday at North Carolina.

Notre Dame: In the midst of a five-game stretch over 11 days, the Irish travel to ACC first-place Miami Wednesday.