Gonzaga, Arizona remain atop AP Top 25 in week of changes 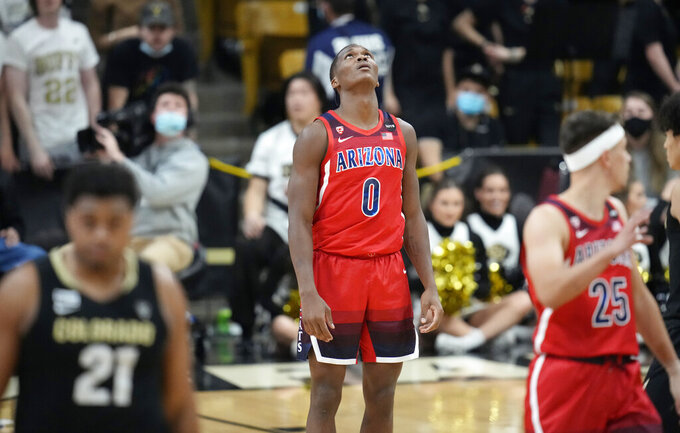 Arizona guard Bennedict Mathurin (0) checks the overhead scoreboard after being called for a foul against Colorado in the second half of an NCAA college basketball game Saturday, Feb. 26, 2022, in Boulder, Colo. (AP Photo/David Zalubowski)

The top six and seven of the top nine teams in the AP Top 25 lost on the same day last week, an unprecedented day of chaos that led to some big changes in this week's poll — everywhere but at the top.

Gonzaga and Arizona remained the top two teams in the poll released Monday, holding steady despite both losing their most recent games.

The Zags received 43 first-place votes from the AP's 61-person media panel after being a unanimous pick last week. No. 3 Baylor had four first-place votes and No. 4 Duke picked up 11. Auburn rounded out the top five.

Gonzaga, Arizona, Auburn, Purdue, Kansas and Kentucky all lost on Saturday, marking the first time in the AP poll era (1948-49) that the top six teams lost on the same day. No. 9 Texas Tech also lost, setting another record for most top-10 teams losing in one day.

“It’s kind of life in late February and early March, especially on the road,” Gonzaga coach Mark Few said after the Zags' 67-57 loss to No. 19 Saint Mary's to close out their regular season.

Baylor was the biggest beneficiary of its Saturday win, moving up seven spots after beating Kansas 80-70. The Jayhawks fell one spot to No. 6 with the loss.

In all, every team but four got shuffled in this week's poll; only Gonzaga, Arizona, No. 14 Houston and No. 16 Southern California held steady.

No teams fell out or moved into the poll, but things are getting awfully interesting with conference tournaments just around the corner.

Baylor, the reigning national champion, looked like a good bet to get back to the Final Four at the start of the season after opening 15-0 while holding the No. 1 spot in the AP Top 25 for five weeks.

Then things got a little shaky.

The Bears lost consecutive home games for the first time since 2015-16, then injuries began piling up, including a gruesome leg injury to forward Jonathan Tchamwa Tchatchoua.

After tumbling down the poll, Baylor may be finding its footing. The Bears won a rematch over Oklahoma State in Stillwater and did the same against Kansas on Saturday, improving to 10-1 against top-10 teams the past two seasons.

“I know our team looked a little bit different in the beginning of the year than we do now but don’t count these guys out,” Baylor coach Scott Drew said. “They persevere.”

Baylor's jump was the biggest of the week by gaining seven spots. Tennessee, Arkansas and Saint Mary's all climbed four spots.

No. 17 UCLA and No. 20 Illinois had the biggest drops (five spots). The Bruins lost to Oregon before beating Oregon State last week and the Illini lost to No. 23 Ohio State before knocking off Michigan.

The Big Ten and Southeastern conferences led the way again this week, each with five teams ranked. The Big 12 had four ranked teams, with the Pac-12 and Big East getting three each. The West Coast Conference had two ranked teams for the second straight week, with the Atlantic Coast, American Athletic and Ohio Valley conferences at one each.