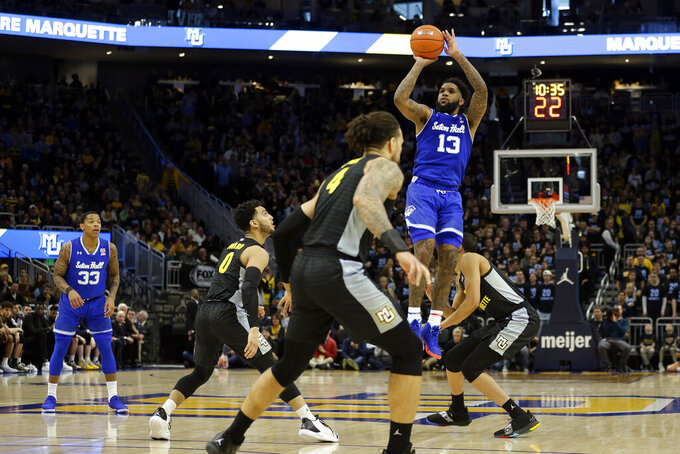 FILE - In this Feb. 29, 2020, file photo, Seton Hall's Myles Powell (13) shoots against Marquette defenders during the second half of an NCAA college basketball game in Milwaukee. Powell has sued Seton Hall, coach Kevin Willard and a staff member for failing to diagnose a knee injury during his senior season, causing him to suffer severe physical and financial damage. (AP Photo/Aaron Gash, File)

NEWARK, N.J. (AP) — Basketball player Myles Powell has sued Seton Hall, coach Kevin Willard and a staff member, accusing them of failing to diagnose a knee injury during his senior season that led to physical and financial damage.

Powell was the Big East Conference player of the year in the 2019-20 season.

The suit alleges Powell was misdiagnosed with an ankle injury early in the 2019-20 season, when it was actually a lateral meniscus tear to his right knee. The suit further alleges the high-scoring guard was not told of the extent of his injury and the failure to treat it properly caused permanent damage.

The suit alleges NBA teams discovered the injury and Powell, who is the third all-time leading scorer at Seton Hall, was not drafted.

“Seton Hall University has always and continues to put the health and safety of our students first," the South Orange, New Jersey-based university said in a statement issued Thursday. "We are aware of the matter, but are unable to comment on pending litigation.”

Attorneys Alan Milstein and Jeffrey Resnick, who are representing Powell, did not immediately return telephone calls made Thursday by The Associated Press.

The lawsuit alleges Powell was hurt playing against Stony Brook on Nov. 9 in the second game of the 2019-20 season. The coach and team doctor examined the injury and told Powell it was a problem with his ankle and continued play would not exacerbate the injury, the suit said.

Powell, who missed two games in December with a concussion, continued to play and do well, but he told Testa his knee continued to bother him, the suit said. Testa told him the pain was being caused by a bone bruise, the suit said, adding Testa maintained that continued play would not be a problem.

The suit alleges Testa would inject “pain killer” medication into the knee to allow Powell to play. It said Willard was aware of the pain issues and the treatment that allowed Powell to play.

The four-count civil suit charges the defendants with negligence, breach of contract and breach of fiduciary duty causing severe and permanent injury including physical pain, emotional distress and monetary damages. It asks for a jury trial.