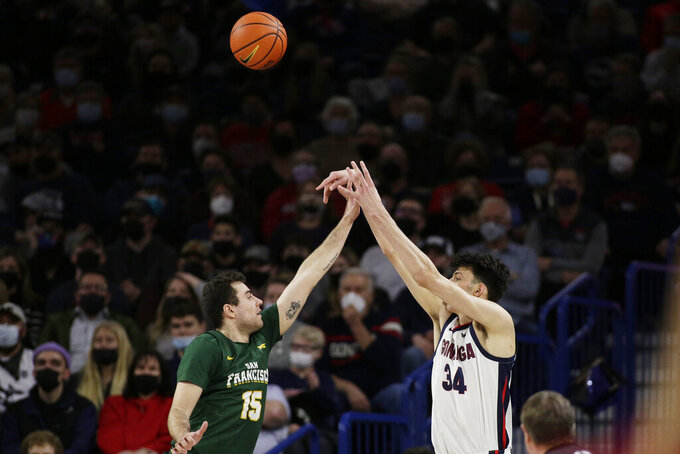 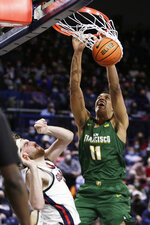 Holmgren scored 22 points, grabbed nine rebounds and blocked four shots in the Bulldogs' 78-62 victory over San Francisco on Thursday night. Timme finished with 23 points, although many came later in the second half.

“Chet was huge for us,” said Timme, a national player of the year candidate. “He was doing it all. He gave us a boost in the first half when we needed it most.”

Timme had just five points in the first half, as San Francisco's defense clamped down and caused him to miss numerous shots around the basket.

“It wasn't fun,” Timme said. “Those are shots I usually make. They didn't go in tonight.”

“Chet was big tonight,” Gonzaga coach Mark Few said. “He made all kinds of plays on offense and defense.”

This was a makeup game for the teams after their Jan. 6 contest was postponed by COVID-19 issues.

Anton Watson scored 11 points and Andrew Nembhard 10 for Gonzaga (15-2, 4-0 West Coast), which regained the No. 1 ranking Monday after Baylor lost a pair of games.

This was Gonzaga's eighth consecutive victory and the 62nd in a row at home, the longest streak in the nation. It was also the Bulldogs' 22nd straight win over the Dons, dating to 2012.

Jamaree Bouyea scored 25 points and Khalil Shabazz 15 for San Francisco (15-4, 2-2), which is off to its best start in decades. Yauhen Massalski had nine points and 10 rebounds.

Neither team shot well in what turned into a defensive battle. Gonzaga made just two of its first 11 shots as the Dons jumped to a 15-4 lead.

Holmgren's 3-pointer capped a late 7-0 run that lifted Gonzaga to a 36-33 lead at halftime.

Gonzaga opened the second half with a 20-7 run, led by nine points by Holmgren, for a 56-40 lead. The Zags pulled away after that.

“I thought we played a really good game,” San Francisco coach Todd Golden said. “We did a great job on stopping their transition game. ... We played well for 34 minutes, but you have to play well all 40 minutes in order to beat GU."

Gonzaga shot 46.7% for the game, but San Francisco managed to shoot just 36% from the floor.

San Francisco: The Dons opened the season with a 13-1 record, but have dropped three of their past five games ... Bouyea is third in scoring in the WCC at 17.9 points per game ... The Dons lead the WCC in 3-point baskets at 9.7 per game, but made just six Thursday night.

Gonzaga: The Bulldogs have won 25 straight conference games, the longest streak in the country, dating to a loss at BYU in 2020. ... Gonzaga leads the nation in scoring at 90.9 points per game and in field goal shooting at 53.9%. ... The Zags' string of three straight games scoring over 100 points ended.