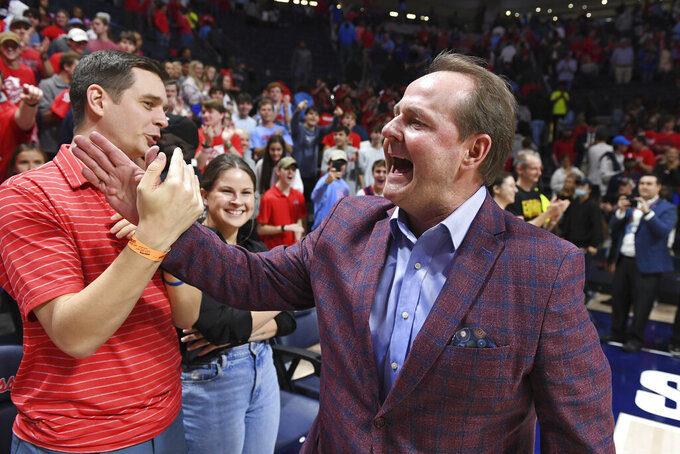 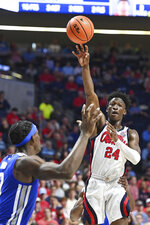 OXFORD, Miss. (AP) — When Mississippi coach Kermit Davis scanned the final stat sheet, he chose the obvious explanation after the Rebels defeated No. 18 Memphis 67-63 on Saturday.

“It’s free throws. We analyze a lot of things as coaches and sometimes it’s real simple” Davis said. “It wasn’t a pretty game offensively for either team, but it was good for us at the end.”

The Rebels (6-2), led by Jarkel Joyner with 20 points and eight rebounds, built a 62-51 lead on a jumper by Luis Rodriguez with 2:10 remaining. They relied on the free throw shooting to send Memphis (5-3) to its third straight loss.

Nysler Brooks made three free throws in the final 32 seconds to preserve the win.

“It was big for me, but it was big for all of us,” said Murrell, a Memphis native. “I had been waiting for this game since COVID canceled it last year. I’ve played against these guys all my life and this was big.”

DeAndre Williams scored 13 points and Earl Timberlake had 11 points for Memphis, which closed to 63-61 with 14 seconds remaining on a pair of foul shots by Tyler Harris.

“We did a lot of positive things in a hostile environment,” Memphis coach Penny Hardaway said. “We didn’t do enough at the end to finish the game.”

The Tigers had two turnovers in the final seconds and 20 overall.

“If we hit the free throws in the first half, we are up,” Hardaway said. "It’s a whole different game. We missed plenty of free throws and it made a big difference.”

In the opening minute of the second half, Ole Miss forward Robert Allen crumpled in the corner in front of the Memphis bench with a left knee injury. Allen returned to the bench with the help of crutches in the final three minutes.

“He will have an MRI tomorrow,” Davis said. “We just don’t know but it could be serious. Just hate it for him.”

Memphis: After an impressive start, the Tigers have not played well since Thanksgiving. The chemistry and talent have not meshed and Hardaway has not been shy about challenging his veterans to make it work. The schedule provides no favors as more highly regarded SEC opponents, No. 16 Alabama and No. 13 Tennessee, follow a dangerous 6-1 Murray State before Christmas.

Ole Miss: Flying under the national radar, the Rebels got a postseason tournament resume building win prior to SEC play. The Rebels are 4-0 against ranked opponents stretching back to last season. Davis, with a well-earned reputation for multiple player rotations, mixed the right defensive combinations against increasingly frustrated Memphis.

“This was important to our players and it’s a win that means a lot,” Davis said. “Memphis will be just fine and they’ll win a lot of games. But good for us today.”

A third consecutive loss figures to drop Memphis from the poll, especially since no three-loss teams are ranked.

Ole Miss: The Rebels, with a four-game home stand before Christmas, host Western Kentucky on Saturday.