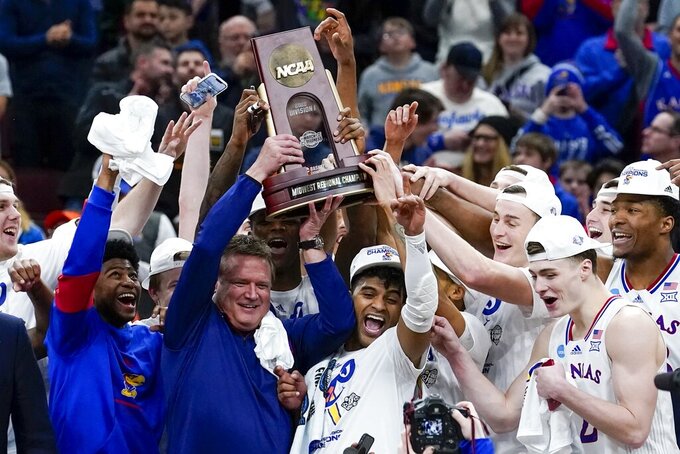 Kansas head coach Bill Self and players hold up the winning trophy after a college basketball game in the Elite 8 round of the NCAA tournament against Miami, March 27, 2022, in Chicago. This year's Final Four is either unprecedented or pretty close. Kansas arrives having recently taken over the Division I lead in all-time wins. (AP Photo/Charles Rex Arbogast)

NEW ORLEANS (AP) — Kansas coach Bill Self finds himself in the same situation that longtime North Carolina coach Dean Smith once did.

Both had won national championships at their respective schools, two of the proudest in the history of basketball, and both had piled more Final Four appearances on top of them. Along the way, each slipped into a coveted gold jacket from the Hall of Fame, something meant to represent the crowning achievement for a college coach.

Yet it took Smith, who grew up in southeast Kansas and played for the Jayhawks, more than a decade to win a validating second national championship with the Tar Heels. And it has likewise been 14 years and counting since Self captured his first with the Jayhawks.

Perhaps fittingly, Self will get another crack at his second against the Tar Heels on Monday night at the Superdome.

Unlike so many coaches who seek the spotlight, Self would rather do just about anything than talk about himself. He has an uncanny ability to take any question about him, or his legacy, and deflect it entirely or spin the answer in the context of his program, for which he routinely calls himself nothing more than “a caretaker.”

But he's also the first to admit that hanging one national title banner since 1988 in the rafters of Allen Fieldhouse is not enough. Nor are three NCAA titles in the history of the program. And the long period since Self's own in 2008 doesn't cut it for the school that produced Wilt Chamberlain whose first coach, James Naismith, invented the game.

“At most places winning one national championship would be quite an accomplishment,” Self said Sunday, one day after Kansas beat Villanova in the Final Four. “I think as many good teams as we’ve had, one’s not enough. And so I don’t think that I personally feel pressure that we have to win, but I do know that when you have a chance to coach at a place where you have an opportunity to be in the game most years, you need to take advantage of that more than we have."

Indeed, Self has won 762 games during his career, including his time at Oral Roberts, Tulsa and Illinois, and given another year he is certain to pass Lou Henson, Lute Olson and Lefty Driesell and approach the top 10 on the career list.

As it stands, nine of the 15 ahead of him have won multiple titles. That includes Roy Williams, who led Kansas to four Final Fours but did not win a championship until returning to North Carolina, where he won three before retiring last year.

The coaches who have won multiple championships, who took the leap from being a great coach to one of the all-time greats: John Wooden at UCLA and Mike Krzyzewski at Duke, Adolph Rupp at Kentucky and Bob Knight at Indiana. And yes, Smith, whose two titles with the Tar Heels matches such luminaries as Henry Iba and Denny Crum.

That is the the rarified company that Self is still trying to join.

“He’s a part of that group. He just is," Tar Heels coach Hubert Davis said. “The job that he’s done throughout his entire career, not just on the court, but in the classroom, in the community, the way that he loves his players, how hard his players play for him, the impact that he’s made for his players, not only in basketball but in life, that’s the determining factor to me on a really good coach. That it’s not just about basketball. It’s about people. It’s about relationships.”

Self is in many ways a complex person.

He's intensely competitive yet knows when to put the game into proper perspective. He's a natural charmer with an “aw shucks” attitude that serves him well in the kitchen's of recruits, yet he can also cuss like a sailor when there is a missed call — or at least one he thinks was missed — during a critical juncture of a game.

He's also a family man who loved nothing more than coaching his son, Tyler Self, and still catches himself seeking advice from his father, a longtime coach and educator, even though Bill Self Sr. passed away in January.

“I actually probably have talked to him more in the last couple of months than I probably did when he was still living," Self said. “I don’t know there’s any specific things. I know when we get in a bind, ‘All right, what do you think? What do we need to do here.’ Stuff like that. But everybody goes through stuff. And certainly my stuff isn’t bigger than anybody else’s."

There is some stuff that looms quite large over Self and his program.

The past few years, the Jayhawks have played amid the shadow of an NCAA investigation that found five Level I infractions within the program, including a charge leveled directly at the head coach. It was part of a larger FBI probe into college basketball corruption that ensnared several big-time programs, and that has left Kansas awaiting its fate from independent arbitrators that were empaneled in part because of the legal complexity of the case.

The potential for serious and lasting NCAA penalties has not made it any easier for Self to win another championship.

“We’ve been dealing with some stuff off the court for a while,” he admitted, “but there was never a doubt that we didn’t have the potential to get back here because two out of the last three years we’ve been arguably as good as anybody.”

Three years ago, the Jayhawks had a team built to win in March, featuring imposing Udoka Azubuike, the dynamic Devon Dotson and a cast of characters that seemed destined to cut down the nets. They were unbeatable from January on, winning all but one game in the Big 12 and positioning themselves for the No. 1 overall seed in the NCAA Tournament.

It finally took COVID-19 to stop them. The pandemic abruptly ended the season and their championship hopes.

Now, with several of the same players on the team, the Jayhawks are within one win of finishing the job.

If they can beat North Carolina on Monday night, Lightfoot and Christian Braun and Ochai Agbaji will finally get to cut down those nets, and Self will finally have the second national championship that has so long eluded him.