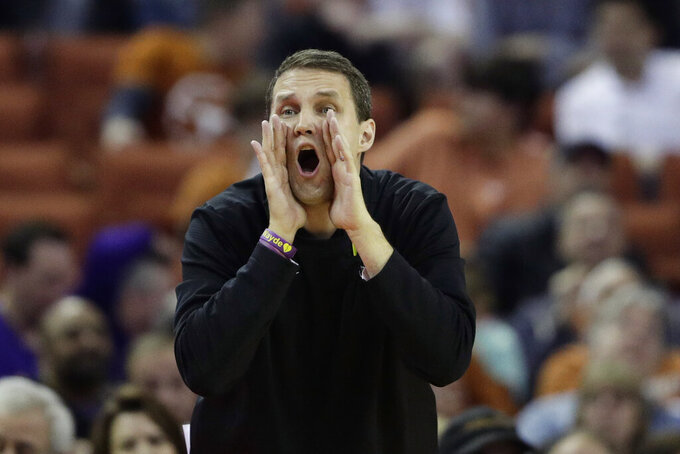 FILE - LSU head coach Will Wade call to his players during the first half of an NCAA college basketball game against Texas in Austin, Texas, in this Saturday, Jan. 25, 2020, file photo. Wade was able to add more size and on-the-ball scrappiness to his roster this season and expects it to show up in a big way when the Tigers are defending. (AP Photo/Eric Gay, File)

BATON ROUGE, La. (AP) — LSU coach Will Wade was able to add more size and on-the-ball scrappiness to his roster this season and expects it to show up in a big way when the Tigers are defending.

“The defense is a lot better,” Wade said. “We have a good philosophy defensively and I feel like we’re going to be much improved on that end going forward.

“It’s a pretty big philosophical change. It’ll be very noticeable when we play,” Wade added. “A little more aggressive in some areas and a little bit smarter in other areas with what we give up and what we take away.”

LSU is among a handful of major college basketball programs – including Kansas and Arizona – being investigated by the NCAA for alleged recruiting violations. But there’s no clear timeline for how that probe will progress, so Wade remains in charge for now of a team that he has helped return to relevance.

LSU was 21-10 and potentially in line for a second straight NCAA tournament berth when last season was prematurely ended by the coronavirus pandemic.

The Tigers have some key players back from last season’s squad, including starters Trendon Watford, Javonte Smart and Darius Days.

Thomas is showing signs in preseason practice of being a natural scorer, but Wade sounds particularly pleased by the way some of his newcomers stop the basketball.

“Wait until you see Mwani Wilkinson and Jalen Cook defend. Those are two very good -- I don’t want to say elite yet -- but very good defenders,” Wade said. “Cook may be the best on-ball defender I’ve seen since we had Brianté Weber at VCU.

“In the past, we haven’t had anything to hang our hat on defensively,” Wade continued. “We’re going to really protect the paint and force you to shoot contested shots. ... We got a little bit of a sturdier philosophy and we have some guys that are more interested in guarding.”

The 6-9 Watford returns after exploring the possibility of entering the NBA draft.

Wade has been impressed by how Watford processed feedback from scouts and stepped up his efforts in the locker room as well.

“He’s playing a lot more physical when it comes to posting guys up, rebounding and hitting people,” Wade continued. “Those are areas that I’m excited about. But where most fans and others will be more excited about is that he’s shooting the ball really well. He has the capability to be 38 percent or 40 percent from 3. If he does that, it opens up the driving lane.”

O’Neal, whose father is immortalized in a stature outside the Pete Maravich Assembly Center, will wear No. 32 this year, the same number his father wore in the NBA with Orlando, Miami and Phoenix. His arrival marks the latest of a number of instances in which LSU’s roster included a player whose father also played for the Tigers. Others include Geert and Shane Hammink; Josh and Pete Maravich; and Collis Temple, Jr., Collis Temple III and Garrett Temple.

LSU assistant Bill Armstrong has been promoted to Associate Head Coach for the 2020-21 season and returning to the bench as an on-floor coach this year will be Kevin Nickelberry, who last season served as assistant to the head coach. Nickelberry has been on basketball coaching staffs for some 20 years.

Like most programs, LSU had to largely scrap its original 2020-21 schedule and start over in concert with the SEC because of the coronavirus pandemic. The Tigers open the season at the Golden Window Classic tournament in Nebraska on Nov. 25 against an opponent to be announced and open SEC play Dec. 29 against Texas A&M, following just a handful of nonconference games.

LSU plays Alabama, Arkansas, Florida, Georgia and A&M two times each. The Tigers play Tennessee and Auburn once each in Baton Rouge and visit Kentucky on Jan. 23.