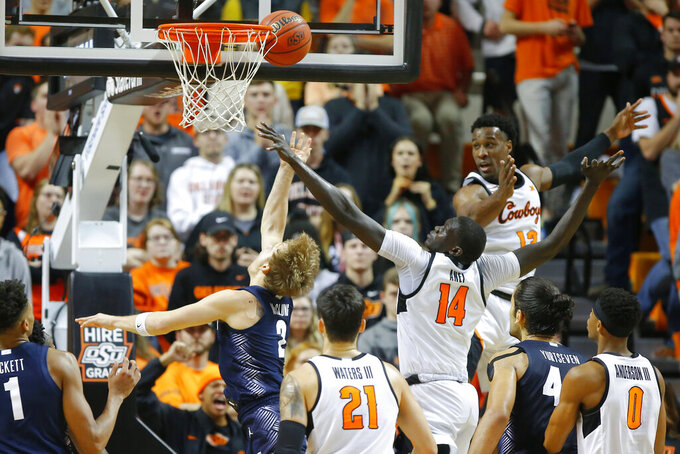 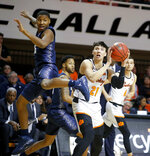 STILLWATER, Okla. (AP) — With Georgetown missing two of its top five scorers, the Hoyas needed someone to step up and Mac McClung answered the call.

McClung scored a season-high 33 points to help the Hoyas hand Oklahoma State its first loss of the season, 81-74 on Wednesday night.

After Georgetown announced that James Akinjo and Josh LeBlanc were transferring, the Hoyas (5-3) put forth a spirited effort following two consecutive losses. McClung connected on 12 of 21 shots, including 4 of 8 from 3-point range. Omer Yurtseven added 19 points and nine rebounds.

“Hell of a game, he stepped up,” Hoyas coach Patrick Ewing said of McClung. “When you lose two guys like Josh LeBlanc and James Akinjo, it’s hard to replace. Last year, they were part of the heart and soul of our team. But I thought that my guys showed that we have a lot of character and have a lot of talent on our team. Mac stepped up and played, to me, one of his best games as a Hoya.”

Terrell Allen started at guard in place of Akinjo and had a season-high 15 points and five assists in 33 minutes.

Oklahoma State’s Lindy Waters also had a career night, scoring 29 points, along with six rebounds and six assists for the Cowboys (7-1), who were also missing a key player. Leading scorer Isaac Likekele, who averages 13.7 points, 5.3 rebounds, 5.0 assists and 2.9 steals per game, sat out due to illness. Cam McGriff added 20 points and six rebounds for the Cowboys.

“I thought our kids played hard,” Oklahoma State coach Mike Boynton said. “All credit goes to Georgetown. They outplayed us, they made timely baskets, they kicked us on the glass, and it’s something that we need to figure out how to get better at before we move forward.”

Waters, who sank three 3-pointers for nine points in the game’s opening three minutes and 22 seconds, downplayed Likekele’s absence as a reason for the defeat.

“He’s obviously a great player, a great piece of our team. He controls the floor a lot, he’s a big guard so he can help us with rebounding and pushing in transition, but we can’t sit here and make excuses about it,” Waters said. “We have to find a way to win, because at any moment, someone might get hurt or get sick.”

After Yurtseven’s rebound dunk made it 40-32 Georgetown 1:42 into the second half, the Cowboys surged back, outscoring the Hoyas 21-8 over the next six-plus minutes to take their first lead since the first four minutes of the contest.

Georgetown grabbed the lead back after McClung connected on three straight 3-pointers, going up 61-55 with 8:27 to play. McGriff’s two free throws with 1:28 remaining brought Oklahoma State to within 71-67 but the Cowboys could get no closer, with Allen scoring seven points in the final minute, including four free throws.

“I think the key to the win is that we picked it up defensively – everyone, not just one person,” Ewing said.

No reason has been given for Akinjo, who ranked second on the Hoyas with 13.4 points per game, leaving the Hoyas. LeBlanc, who averaged 7.2 points per game (fifth on the squad), and two other players, Myron Gardner and Galen Alexander, have had restraining orders requested against them amid allegations they harassed a female student and stole several items from her home. Temporary restraining orders filed by a different student against LeBlanc and Alexander have been granted.

No criminal charges have been filed and Georgetown officials have said Akinjo was not involved in either case.

Georgetown: Despite the distractions, the Hoyas put forth a strong effort right from the start. They used a 14-3 run over a five-minute span early in the opening half to build a comfortable lead, going ahead 23-15 on Jahvon Blair’s 3-pointer with 11:56 left. From that point, Georgetown maintained a lead of at least five points until a 3-pointer by Oklahoma State’s McGriff with nine seconds left sent the Hoyas into halftime with a 36-32 advantage.

Oklahoma State: Coming off a dominant 78-37 triumph over Ole Miss in the NIT Season Tip-off Championship game last Friday night in Brooklyn, the Cowboys appeared to miss Likekele. It was the first time in 34 games, dating back to early last season, that the same five Oklahoma State players (McGriff, Yor Anei, Likekele, Thomas Dziagwa and Waters) did not start together. Freshman Chris Harris Jr. started at guard in Likekele’s place and had a career-high 10 points and three rebounds in 23 minutes.

The Hoyas won the rebounding battle 43-29, including a dominant 25-7 advantage in the second half alone. Oklahoma State had the edge 22-18 in the opening half, but with the help of 10 second half offensive boards, Georgetown controlled the glass down the stretch. “I thought in the second half, we did a much better job of boxing out and securing rebounds,” Ewing said.

Georgetown: The Hoyas continue their southwestern road trip with a visit to Dallas to take on SMU on Saturday.