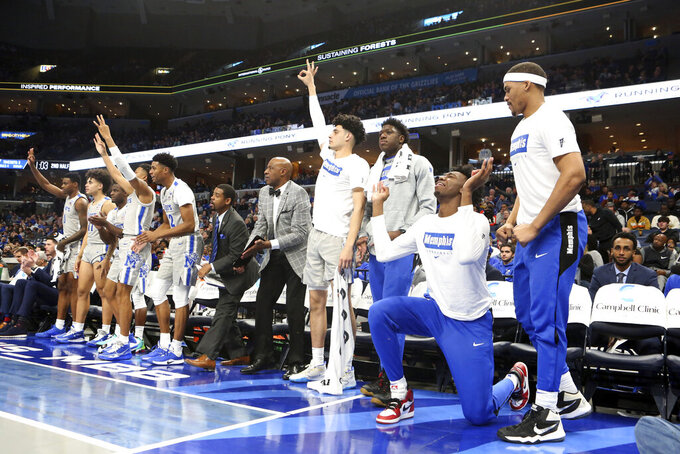 Memphis' James Wiseman (second from right) goes down on his knees as he and his teammates celebrate a basket in the second half of an NCAA college basketball game against Alcorn State Saturday, Nov. 16, 2019, in Memphis, Tenn. (AP Photo/Karen Pulfer Focht) 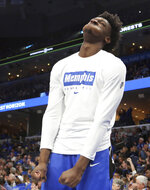 The James Wiseman saga finally has a resolution.

After months of back-and-forth between Memphis and the NCAA, the sports governing body has cleared the heralded freshman to return to the basketball court on Jan. 12.

Wiseman will sit out a total of 12 games under a decision announced by the NCAA.

The sports governing body also announced Wednesday that Wiseman must donate $11,500 — the amount of impermissible benefits the NCAA ruled he received — to a charity of his choice to regain his eligibility.

The University of Memphis issued a statement that the NCAA informed school officials that Wiseman must sit out nine games for the infraction and three more for the games the freshman already has played this season.

“Based on case precedent, the circumstances of this case and other mitigating factors, the University will immediately appeal this decision,” Memphis said. “We expect a more fair and equitable resolution, and we will exhaust all avenues on James’ behalf.”

Coach Penny Hardaway made clear after Wednesday night’s 68-58 win over Arkansas-Little Rock that he wasn’t happy with the punishment even as Memphis now knows how many games Wiseman will miss.

“I’ve stated from the beginning I didn’t think it was fair,” Hardaway said. “There’s nothing I can do about it. Obviously, James should be on the floor. That’s just how I feel.”

Wiseman had filed a lawsuit to continue playing after the NCAA ruled him “likely ineligible” for receiving the impermissible benefits from Hardaway — who was not the Memphis coach at the time.

Wiseman withdrew the lawsuit against the NCAA on Nov. 14 after Memphis played him in the Tigers’ first three games of the season. The 16th-ranked Tigers were 2-1 with the 7-foot-1 center on the court.

Once Wiseman withdrew his lawsuit, Memphis held him out of a win over Alcorn State while working to resolve his eligibility status with the NCAA. His first game back will be when the Tigers visit South Florida.

The NCAA had ruled Wiseman was “likely ineligible” due to $11,500 Hardaway gave the center’s family for moving expenses from Nashville to Memphis in the summer of 2017. That started a legal battle that featured Wiseman suing the NCAA and obtaining a temporary restraining order to play two games.

Wiseman also will miss the Tigers’ game Nov. 28 against North Carolina State in Brooklyn, New York, on Dec. 28. Wiseman will miss a trio of games against Southeastern Conference teams: Saturday vs. Mississippi, Dec. 14 at No. 20 Tennessee and Jan. 4 vs. Georgia.

The freshman also will miss the first two games of league play in the American Athletic Conference — pending Memphis’ appeal.

The NCAA noted in its release Wednesday that the payment to Wiseman’s family in 2017 was not allowed because of Hardaway’s status as a booster, which included a $1 million donation to the university for the Penny Hardaway Athletic Hall of Fame.

“Boosters cannot provide financial assistance to prospective student-athletes, their family members or friends unless that assistance is generally available to other members of the student body and is not given based on athletics ability,” the NCAA release stated.

It’s the latest step in the dramatic and much-debated saga over a center who could be the No. 1 pick overall in the NBA draft next June if he leaves Memphis after his freshman season. Through it all, Wiseman had the backing of his coach, the university and all Memphis as he battled the NCAA off the court.

Wiseman played Memphis’ opener, then went to court on Nov. 8 for a temporary restraining order that allowed him to play in a rout of Illinois-Chicago as a starter less than an hour after a judge signed the paperwork. He played in a loss at then-No. 14 Oregon and remains Memphis’ leading scorer averaging 19.7 points and 10.7 rebounds.

He dropped the lawsuit and his attorneys said it had become clear the lawsuit was an issue between the university and the NCAA.

The lawsuit had stated the NCAA first ruled Wiseman eligible in late May before sending Memphis a letter just before the season opener that the freshman was “likely ineligible” for what the governing body deemed impermissible benefits from Hardaway, before the former NBA star became Memphis’ coach.

Both Hardaway and Wiseman’s lawsuit stated the coach had disclosed the money given for moving expenses in 2017 before Wiseman played at East High School as a junior for Hardaway. The university said in a statement that Wiseman didn't know about the money given to his family.