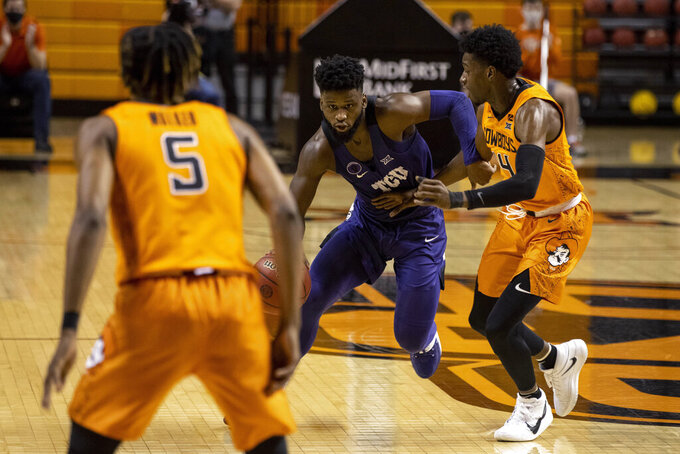 Nembhard scored 21 for the Horned Frogs (6-2, 1-1 Big 12), making his last four field goals after going without even an attempt for about 14 minutes of the second half. Samuel added 18 points including a dunk that made it a one-point game with 45 seconds left.

Cunningham scored 17 points with eight rebounds to spark a second-half Oklahoma State (6-1, 0-1) comeback after the Cowboys fell behind by as many as 13 in the first half, and trailed 37-32 at the break.

Cunningham was held to just two points on 1-for-9 shooting by halftime but opened the final period with a drive to the basket on the first possession. And he didn't let up, forging a 44-44 tie after Ferron Flavors stole the ball from Nembhard and fed Cunningham, trailing on the break, for a dunk.

Rondel Walker added 12 points for OSU, Isaac Likekele and Matthew-Alexander Moncrieffe each scored 10. Five times Cunningham scored to keep Oklahoma State's lead at five points through the second half. The Cowboys opened an eight-point lead with 2:21 to go but didn't score again.