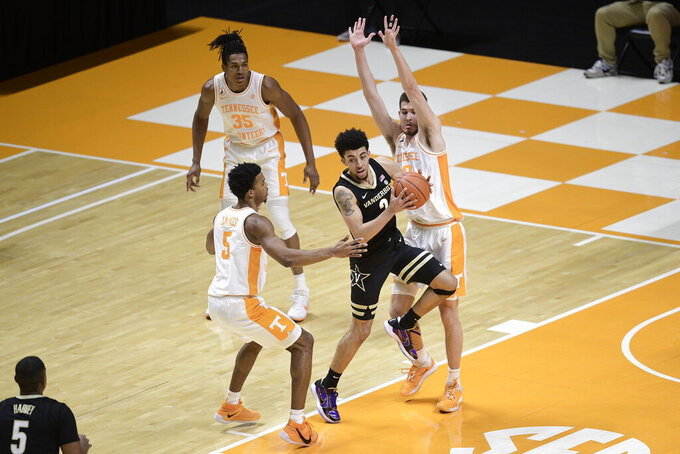 Bailey wasn't taking his success in No. 10 Tennessee's 81-61 win over Vanderbilt for granted.

Bailey connected on three consecutive 3-pointers midway through the second half, igniting a rally that turned a tight game into a rout. The Volunteers (10-1, 4-1 SEC) beat the Commodores (4-6, 0-4) for the seventh straight time in the cross-state rivalry.

Keon Johnson scored 10 of his 16 points in the second half to lead Tennessee. John Fulkerson scored 15 points, Bailey had 11 and Jaden Springer scored 10.

“They hit four 3s (Springer also had one) in a row,” Vanderbilt coach Jerry Stackhouse said. “That broke up the game. It was an uphill battle from there.”

A four-point Tennessee lead turned into a 17-point advantage with that flurry of long shots.

“(Bailey) was hitting 45% from the 3-point line at the start of the year,” Tennessee coach Rick Barnes said. “We need that from him. We need to get consistency on the offensive end.”

“Each game-in and game-out I'm getting more comfortable,” said Johnson, a freshman. “Whether it be more aggressive with my defense or on the offensive end.”

Tennessee went five mintues in the first half without a basket, yet still led by 10 points, 34-24, at the break.

Fulkerson had 10 points at intermission and Josiah-Jordan James seven.

Disu kept the Commodores in the game with 10 points in the first half.

Tennessee went through an offensive lull in each half. The Vols were able to turn things around.

“I'd like to say we can bring it, whether we've got it or not,” Fulkerson said. “Especially on the defensive end, because that's all about effort.”

The Vols' ball-screen defense pestered the Commodores into shooting 5 of 23 from 3-point distance.

“(Tennessee's defense) got us out of our rhythm,” Stackhouse said. “We handled it the best we could. We settled for some shots.”

Vanderbilt's Tyrin Lawrence will miss the rest of the season after suffering a torn ACL during practice last week, according to Stackhouse.

The 6-foot-4 freshman had averaged 2.9 points and 2.3 rebounds while playing in seven games, starting five.

“He was trending in the right direction,” Stackhouse said. “He's a great kid. He'll battle back. This was not a good week for us.”

Besides the injury, Vanderbilt had its home game with Tennessee postponed Tuesday, and missed a couple days of practice because of COVID-19 protocol.

Vanderbilt: Sooner or later, things will turn around for the Commodores. They came close against Kentucky (losing 77-74) and Mississippi State (84-81). Getting that first league win is critical.

Tennessee: The Vols' victory over Vanderbilt was the 719th of Tennessee coach Rick Barnes' career (34 seasons at George Mason, Providence, Clemson, Texas and Tennessee). He is tied for 20th all-time in Division I with Phog Allen and Don Haskins.

Vanderbilt: Struggling to get out of the SEC cellar, the Commodores will host Texas A&M on Wednesday.

Tennessee: The Vols have a quick turnaround, and travel to Florida on Tuesday.