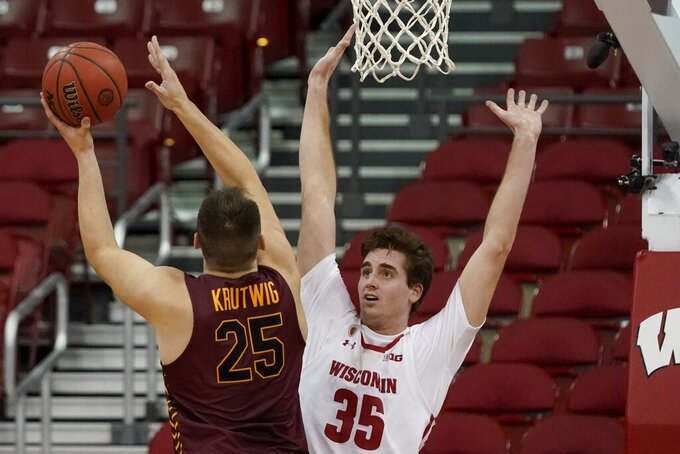 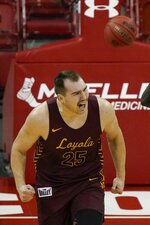 MADISON, Wis. (AP) — Wisconsin is at its best when hitting 3-pointers. That meant Loyola of Chicago picked the wrong night to play the Badgers.

Brad Davison and D’Mitrik Trice each scored 17 points as No. 12 Wisconsin capitalized on its sizzling outside shooting to beat Loyola of Chicago 77-63 on Tuesday.

Wisconsin (5-1) went 10 of 18 from beyond the arc and made four of those 3s during a 19-2 run that helped the Badgers build an 18-point advantage in the second half.

“We like to play with five guys on the floor who can all shoot the 3,” said Wisconsin's Micah Potter, who went 3 of 4 from long range to finish with 13 points and seven rebounds. “That really spaces the floor, opens up driving lanes, opens up the post, all that kind of stuff.”

The game was set up just two days earlier after both teams had scheduled Wednesday matchups scrapped due to the pandemic. Wisconsin had planned on hosting Northern Iowa, and Loyola was supposed to face Duquesne in Indianapolis.

Instead, these two midwestern programs squared off for the first time since 1998.

Krutwig and Williamson both played on Loyola's 2018 Final Four team. Ramblers coach Porter Moser said this game showed how his squad must build more depth to make a postseason run this season.

“I thought Lucas and Krutwig competed their tails off, really competed at a high level,” Moser said. “We've got to get more of that.”

Neither team could get much going offensively early on.

Wisconsin fell behind 7-0 early while missing its first seven shots. The Badgers responded with a 17-3 spurt as Loyola missed 10 of 11 field goal attempts.

Loyola tied the game at 33 early in the second half on consecutive inside baskets from Krutwig. Trice’s jumper put Wisconsin back ahead for good with 17:41 left.

Krutwig made the second of two free throws to cut Wisconsin’s lead to 35-34. But the Badgers followed with nine straight points, thanks to a pair of 3-pointers from Potter and one by Trevor Anderson.

That sparked a 19-2 spurt that also included a four-point play from Davison, who got fouled while making a 3-pointer and hit the ensuing free throw.

Loyola tried to rally and got the margin down to nine on Keith Clemons’ four-point play with just over eight minutes left, but the Ramblers didn't get any closer the rest of the way.

“I like the way we battled back after a little slow start,” Wisconsin coach Greg Gard said. “We got the ball in high-percentage areas and knocked down some shots. Defensively we were able to clamp down on some things.”

Loyola: This marked the Ramblers' first major test after they had defeated Division II program Lewis, Chicago State and Illinois-Chicago by an average margin of 25.7 points. The step up in competition was most apparent from 3-point range. Loyola had allowed its first three opponents to hit just 26.9% (14 of 52) of their attempts from beyond the arc before getting blitzed by Wisconsin's perimeter shooting.

Wisconsin: The Badgers continue to do a good job of dealing with all the changes to their nonconference slate. Wisconsin won 73-62 over Rhode Island last week in a game that had been added to the schedule just two days beforehand and recovered from a slow start to beat Loyola.

This game doesn't figure to have as much of an impact on Wisconsin's ranking as its Saturday matchup with No. 23 Louisville.

Wisconsin hosts Louisville on Saturday. The Badgers and Cardinals originally were scheduled to play on Dec. 9, but the game was postponed due to a positive COVID-19 test and contact tracing within Louisville's program.