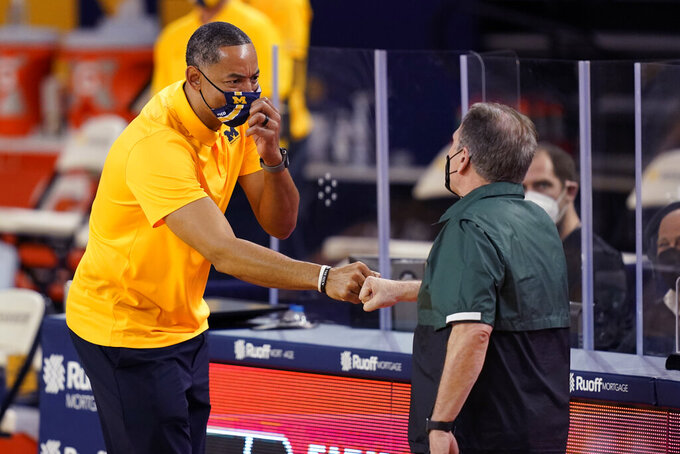 ANN ARBOR, Mich. (AP) — At some point during Michigan's giddy postgame celebration, Juwan Howard saved himself a little keepsake from this marvelous season.

“I put some of that confetti in my pocket,” Howard said. “I'm just going to keep it in a nice safe place, because it's hard winning championships, man. I'm going to always remember this moment.”

Franz Wagner scored 19 points, Hunter Dickinson added 14 and No. 2 Michigan wrapped up the Big Ten title with a 69-50 victory over rival Michigan State on Thursday night. It was an emotional night for the Wolverines, even though there weren't many fans at Crisler Center because of the pandemic. When the game ended, confetti fell from above and players danced on the court before cutting down the net at one end.

Howard reached the Final Four as a player twice with the Fab Five, but even those teams never won the Big Ten. When Michigan shared the conference title in 2012 under John Beilein, it was the program's first regular-season crown since 1986. The Wolverines won it again in 2014.

Now Howard has a championship in just his second season as coach, having outlasted a loaded league that currently has four teams ranked in the top seven nationally.

“We were fortunate enough to win the Big Ten championship during the regular season. It's hard doing that. It's so hard,” Howard said. “And I remember as a player, it was very hard for us, and so to do it this year, it's a beautiful moment.”

The Wolverines (19-2, 14-2) had a chance to clinch the championship based on winning percentage with a victory in any of their final three games. They were blown out by No. 4 Illinois — the team chasing them — on Tuesday night, but they rebounded with a gritty effort two nights later.

Michigan went on a 9-2 run to take a 39-28 lead into halftime. The Wolverines later went on a 25-4 tear that spanned much of the second half.

Aaron Henry scored 14 points for Michigan State (14-11, 8-11), which will finish with a losing conference record for the first time since 1993. It had never happened before under coach Tom Izzo, and the Spartans are struggling to extend Izzo's streak of 22 straight NCAA Tournament appearances.

Michigan State did have two recent wins over top-five opponents, beating Illinois and Ohio State. The Spartans will get another crack at Michigan on Sunday. This home-and-home series to finish the regular season came about because of the Michigan athletic department's coronavirus-related pause that started in January.

“We’ve got some work to do and I’m looking forward to Sunday,” Izzo said.

Wagner and Mike Smith both had 3-pointers early in Michigan's second-half run. Dickinson also had a couple big dunks, and the 7-foot-1 center made another big play when he dove on the floor for a loose ball.

Michigan State: The Spartans had made some progress recently in their push for an NCAA bid, but it's been a grueling stretch, and Michigan exposed all of their problems at the offensive end. Michigan State went 0 for 9 from 3-point range, its first game without a 3 since Nov. 15, 2013 against Columbia, according to Sportradar.

“We didn’t shoot the ball well,” forward Joey Hauser said. “Defensively, I think we did a pretty decent job.”

Michigan: The Wolverines secured their championship in style — with a blowout against their in-state rivals. It wasn't a particularly pretty first half for either team, but Michigan defended tenaciously and eventually pulled away. The Wolverines were in a tough spot when Beilein left for the NBA, but Howard has kept Michigan rolling, and it didn't take him long to win a conference title.

Former Michigan State star Draymond Green made an appearance in a pregame video the Wolverines watched.

“Coach showed us a video of Draymond Green. You know he's a big talker,” Smith said. “He was just saying, like, how he wished we would never win a game ever. ... That just shows how competitive this matchup is.”

Michigan bounced back like a good team should after the Illinois game. The Wolverines still have one more game before the next poll.

The regular-season finale for both teams is Sunday in East Lansing. It's Michigan's fifth game in 11 days and Michigan State's seventh in 16.