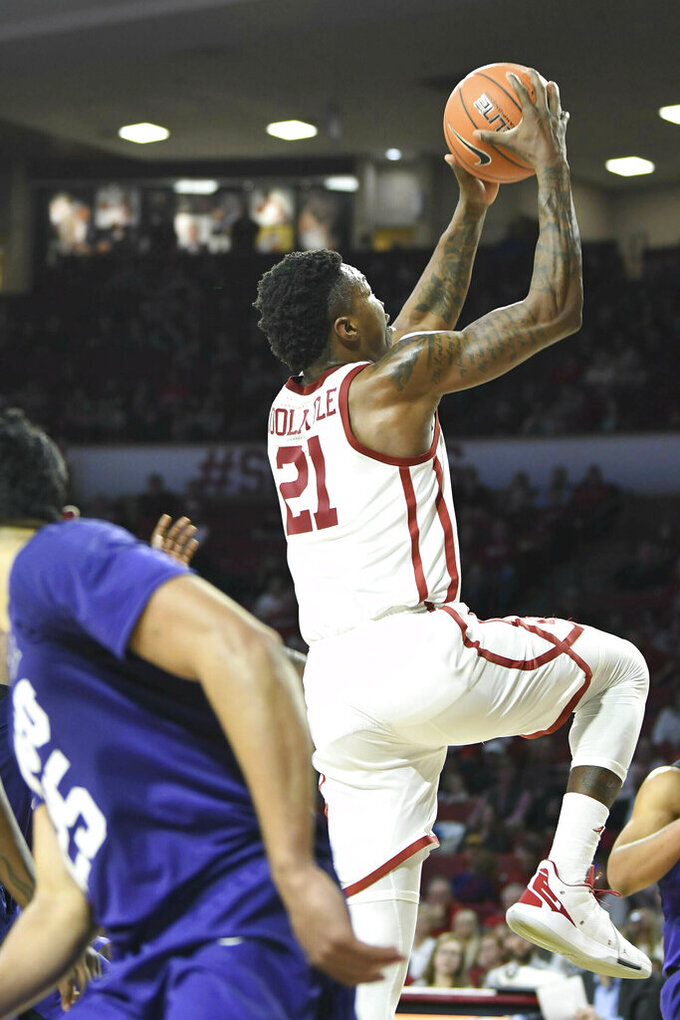 Oklahoma forward Kristian Doolittle goes to the basket against TCU during the second half of an NCAA college basketball game in Norman, Okla., Saturday, Jan. 12, 2019. (AP Photo/June Frantz Hunt) 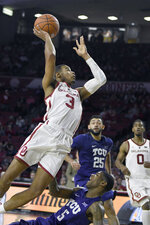 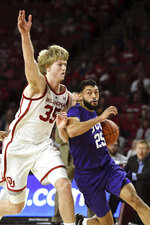 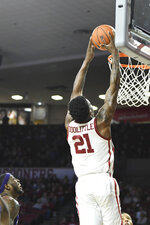 NORMAN, Okla. (AP) — Back from suspension and back in the swing of things, Kristian Doolittle delivered for No. 23 Oklahoma on Saturday.

Doolittle hit a runner with less than three seconds left to lift the Sooners over No. 25 TCU 76-74, the latest sign that the junior is back to the form that made him a budding standout as a freshman.

Doolittle averaged 9.1 points per game over 25 starts his first year, but a suspension to start last season slowed his progress.

He's finally catching up. Doolittle led the Sooners (13-3, 2-2 Big 12) with 24 points and 10 rebounds, his first double-double since the final regular-season game of his freshman season.

After not scoring in double figures from the beginning of last season until Dec. 18, Doolittle has scored 12 or more points in five of the last six.

"I knew I had to be more aggressive, regardless of where I started off at," Doolittle said. "I've just been doing what the team needed me to do."

With Doolittle's big game — he also had a critical defensive rebound in the final minute that led to free throws — the Horned Frogs (12-3, 1-2) struggled to defend the inside for the second consecutive game. Earlier in the week, it was Kansas' Dedric Lawson that hurt TCU.

"I'd like to be more physical yet we've got all our guys in foul trouble at the same time," TCU coach Jamie Dixon said. "It's kind of a challenge we've got. We've got to look at some things better. Our defense was really good for us early in the year but it's let us down the last two games."

Oklahoma: After playing road games at Kansas at Texas Tech, a pair of top 10 teams, in the first three games of Big 12 play, the Sooners needed to take advantage of a home game. They have six consecutive games against unranked opponents.

TCU: The Horned Frogs have dropped two consecutive games since having a nine-game winning streak end Wednesday at Kansas. While TCU has to be encouraged by Noi's play, it missed starting guard Jaylen Fisher, who was out for the third consecutive game with a knee injury.

Oklahoma's Brady Manek reached up and blocked Alex Robinson's shot with his left hand with just under six minutes to play. Manek's blocked wound up in the hands of Miles Reynolds, who streaked up court, fired a bounce pass from halfcourt to Doolittle at the free-throw line. Doolittle's layup bounced out, but he grabbed the offensive rebound and finished to tie the game.

With 51 seconds to play, Oklahoma's Aaron Calixte stole the ball from RJ Nembhard and fed it ahead to Christian James, who finished and was fouled. His free throw put the Sooners ahead by one.

TCU dominated the glass early, outrebounding the Sooners 30-14 in the first half, including 13 offensive rebounds. But Oklahoma turned things around in the second half, with a 22-12 rebounding edge after halftime. The Horned Frogs turned their 17 offensive rebounds into just eight second-chance points.

POLL IMPLICATIONS: Both teams were hanging by a thread in the rankings coming into the game and Oklahoma's win likely keeps the Sooners ranked after a seven-point loss at No. 8 Texas Tech earlier in the week. TCU figures to fall out of the poll for the second time this season.

Oklahoma stays at home for a Wednesday meeting with Kansas State, which knocked off No. 20 Iowa State on Saturday. The home team has won the last seven meetings in the series.