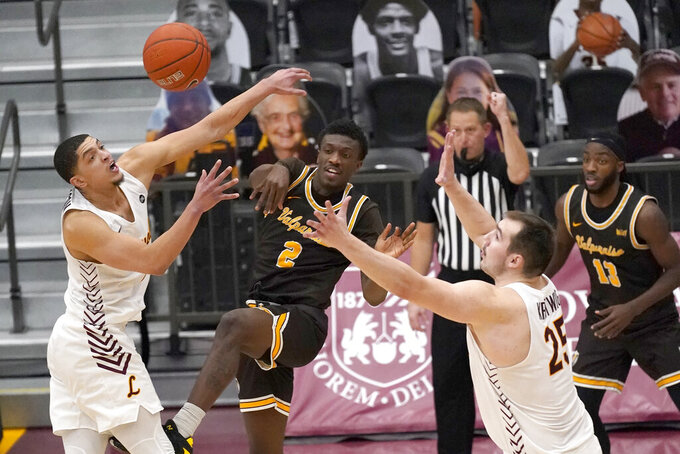 CHICAGO (AP) — Keith Clemons scored 16 points, Cameron Krutwig added 13 and No. 22 Loyola Chicago made a defensive stop in the final seconds to hang on for a 54-52 victory over Valparaiso on Wednesday night.

“That was a Valley pride game,” Loyola coach Porter Moser said. “Valpo just grinded it and they were ready to play. We have a tremendous amount of respect for Valpo. They're playing really well. It was just a grind-out defensive game.”

Zion Morgan had 15 points and Ben Krikke and Goodnews Kpegeol had 10 points apiece for Valparaiso (8-15, 5-9).

Loyola won the first meeting between the teams 75-39 on Jan. 20 at Valparaiso.

This was Valpo's third game against a ranked opponent this season, and the Crusaders fell to 1-2 in those matchups. Valpo beat then-No. 25 Drake 74-57 on Feb. 7, a day after losing to the Bulldogs.

“I was ready to enjoy another win against a Top-25 team,” Morgan said. “We know what we can do. Our play hasn't showed it, but we know we're one of the top teams in the conference.”

Lucas Williamson hit a 3-pointer with 3:33 remaining to give Loyola a 52-48 lead, its biggest to that point.

Kpegeol scored with 1:23 to play to trim the Valpo deficit to four, ending a scoreless stretch of 3:35.

Sheldon Edwards then came up with a steal and drove for a basket with 54.8 seconds remaining to make it 54-52.

Valpo got the ball back with 24.7 seconds to go after forcing a shot-clock violation. After two non-shooting fouls, Valpo inbounded the ball with 13.2 seconds left. Krikke missed a 16-footer and Kpegeol was called for a foul on the rebound with 1.1 seconds to go.

“We know every game is gonna be a battle,” Clemons said. “Everybody wants to knock off Loyola.”

Loyola got off to a slow start offensively. The Ramblers went scoreless for more than seven minutes and made just three of their first 15 field-goal attempts, including 1 for 6 on 3-pointers.

Valpo took its biggest lead, 29-20, on a 3-pointer by Donovan Clay 3-pointer with 1:18 left. Loyola, though, ended the half with back-to-back 3s by Williamson and Aher Uguak to pull within 29-26 at halftime.

Valparaiso: The Crusaders are hoping to turn the season around. They have never beaten a ranked team on the road.

Loyola: Maintained first place in the conference heading into an eight-day break.

Krutwig was the focus of Valpo's defense early. He was double- and triple-teamed in the post and often drew two defenders before he had the ball. He finished with five assists. “He bailed us out so many times with his passes,” Moser said.

Valparaiso: At Southern Illinois for back-to-back games Sunday and Monday to complete a five-game road swing.

Loyola: Host Southern Illinois in back-to-back games on Feb. 26 and 27.