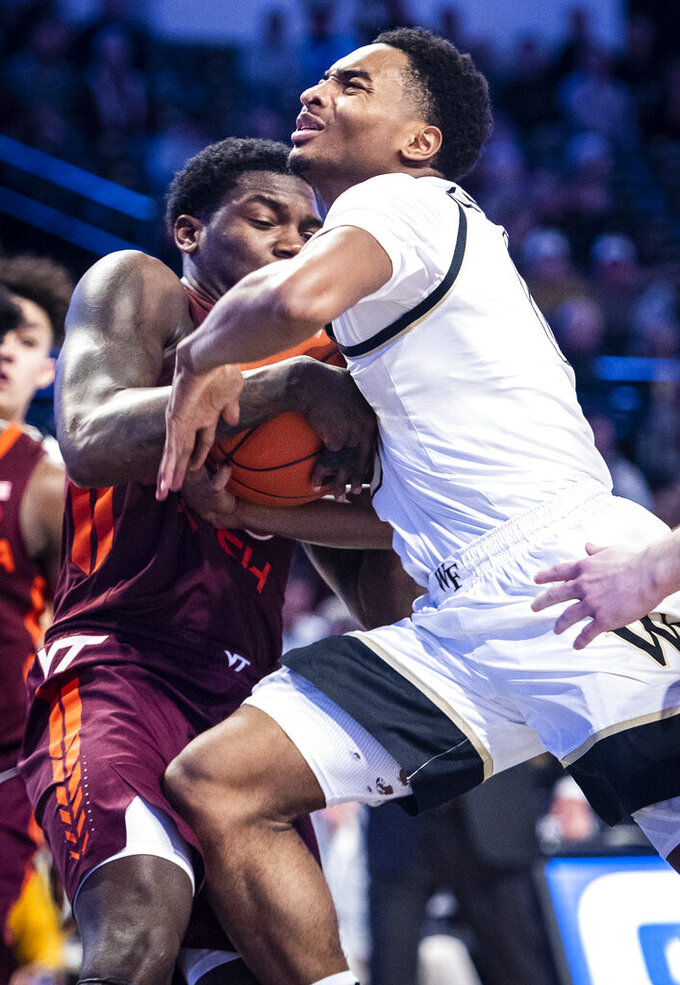 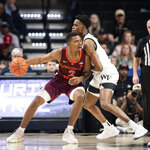 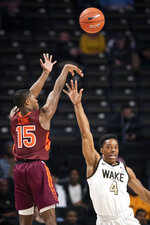 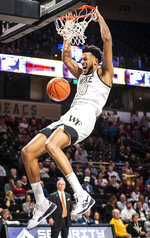 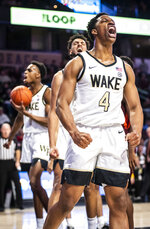 WINSTON-SALEM, N.C. (AP) — Tyrece Radford is only 6-foot-1, but the redshirt freshman has played like a veteran big man for ACC surprise Virginia Tech.

Radford made a huge impact Tuesday night in the Hokies’ 80-70 victory at Wake Forest. Radford’s thunderous left-handed dunk through the hands of 7-foot Olivier Sarr was the highlight of his 21-point, 13-rebound, four-steal performance.

Driving to the basket from the left with less than 10 minutes to play, Radford dropped a powerful hammer over and through Sarr then converted a foul shot for a three-point play and a 15-point Hokies lead.

“That was the play of the year for us,” said 6-7 Landers Nolley II, another redshirt freshman, who also scored 21 for the Hokies. True freshman Jalen Cone added 15 for the winners.

Virginia Tech (13-4, 4-2) stretched its lead to 20 before coasting home in the final minutes. Wake Forest (8-8, 1-5) played without standout guard Chaundee Brown (leg injury) for the third straight game – all losses.

Sarr led the Deacons with 18 points, nine rebounds and two blocks. Brandon Childress, who was in early foul trouble, added 16 and Andrien White had 12. The Deacons were hurt by 18 turnovers.

“We have to value the ball more,” said Wake Forest coach Danny Manning.

Just minutes after the game, Radford was shown a video of the highlight dunk. But he didn’t supply any colorful commentary – and he downplayed his jumping ability.

“We’re just having fun,” said Radford, who leads the Hokies in rebounding with 6.1 per game. “I’m always up for the test – just say that.”

First-year Hokies coach Mike Young said his young team has made him raise his preseason team goals, though he wasn’t specific. The Hokies pulled within a game of Duke and Louisville at the top of the ACC standings.

“Nothing is going to surprise me anymore with this team,” Young said.

Virginia Tech grabbed a 20-10 early lead before Wake Forest roared back to take a six-point lead. The Hokies led 33-31 at halftime.

The Hokies outscored the Deacons 15-6 at the outset of the second half.

“We’ve got some guys on this team who haven’t experience this (ACC play) before,” said senior Childress.

Virginia Tech: The Hokies picked up a key road victory in their quest to stay in touch with Duke, Louisville and Florida State at the top of the standings and play their way into the NCAA Tournament.

Wake Forest: The Deacons missed the offense and bulk of Brown, who did not practice this past week. The home loss to Virginia Tech has to be considered a missed opportunity for a team in need of a boost.

KEY STATS: Virginia Tech made 15 of 25 shots in the second half, including 4 of 9 from 3-point range. Wake Forest made only 2 of 10 3-point shots in the final half.

KEY MOMENT: Radford’s three-point dunk play took the air out of a Wake Forest crowd that knew a victory was crucial to the team’s postseason hopes.

Va. Tech: The Hokies play host to Syracuse on Jan. 18.