Pitino rises from ashes of scandal for rebirth at Iona 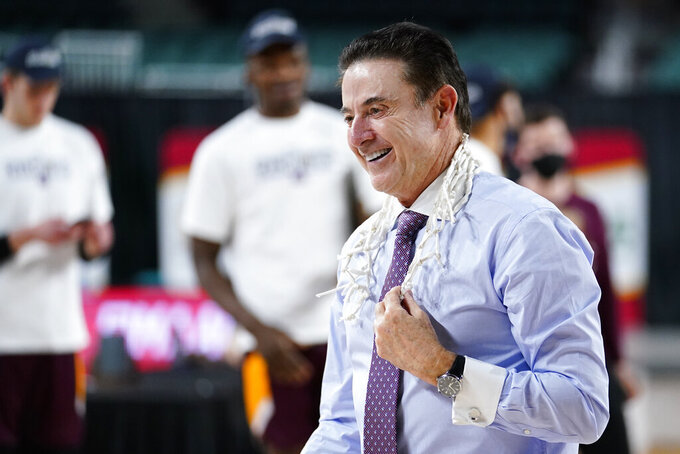 FILE - Iona head coach Rick Pitino celebrates after Iona won an NCAA college basketball game against Fairfield during the finals of the Metro Atlantic Athletic Conference tournament in Atlantic City, N.J., in this Saturday, March 13, 2021, file photo.Rick Pitino survived sex scandals and FBI investigations , won national championships , and when his coaching options seemingly dried up , he left for Greece. Somehow , the winding road of his career took him to Iona - and back in the NCAA Tournament. The last stop - he swears it’s true - of his career. (AP Photo/Matt Slocum, File)

Rick Pitino pioneered use of the 3-point shot in college, and he used the first season of the shiny, new 19-feet, 9-inch toy to help Providence become the first six seed to reach the Final Four.

Pitino had already led Boston University to the NCAA Tournament several years earlier, but taking a second program with only pockets of success to March Madness made the sharp-dressed New Yorker one of the hottest coaching candidates in college or the NBA.

He also made a vow he would not keep.

After Providence lost to Big East rival Syracuse in a 1987 national semifinal, Pitino declared: “I would never entertain coaching at any other college than Providence.”

Never is a mighty long time in college basketball, and that quote is good for a chuckle these days -- except maybe in Rhode Island -- because no coach has weaved his way through glamour jobs in the NBA and college quite like Pitino, except perhaps for Larry Brown. But while Brown has had similar highs (Final Fours, the Hall of Fame, hundreds of career wins), the lows for Pitino (sex scandals, FBI investigations, exile) are unique.

For better or worse, with his made-for-TV charisma and formula for quick fixes, Pitino is back in the tournament as arguably the most famous person in Indy on any line of the bracket.

That promise at Providence was forgotten about three months later when Pitino left to coach the New York Knicks. And 34 years later, Pitino is set to coach his record-tying fifth team in the NCAA Tournament. Pitino leads Iona (12-5) in Indianapolis for a first-round game Saturday against second-seeded Alabama, while the previous four schools he coached in the tournament are out.

Kentucky is not walking through that door.

Louisville is not walking through that door.

Pitino, however, is here, with the eight designer suits he says he packed for Indianapolis as a motivational tool for the Gaels, the Metro Atlantic Athletic Conference Tournament champs out of the New York suburbs.

“When you’re in a league where you’re one bid, and you lose and there’s no tournament, not even an NIT, the pressure is incredible and that’s something I hadn’t felt as a coach before,” Pitino said. “That was the first time.”

Pressure? Pitino could write a book on pressure, he’s already co-authored enough to rival J.K. Rowling, and a few chapters on this season would be a doozy. He navigated his first season with the Gaels in a pandemic, including a 51-day hiatus the school says sidelined them longer than any team in the country. The 68-year-old Pitino even contracted the coronavirus, and the Gaels were forced to stop four times this season because of virus issues.

Pitino told his team not to complain, that shutdowns were a minor inconvenience compared to more than 538,000 dead from the disease. Asked about handling tough times this season, Pitino invoked dealing with the death of his brother-in-law in the Sept. 11 attack on the World Trade Center as the true meaning of pushing through hardships in life.

The good times for Pitino at Iona, a private Catholic college in New Rochelle, New York, often come with a dredging of the past.

Is a tourney berth vindication for the embarrassing ending at Louisville, where he was fired in 2017 in a pay-for-play scandal? Where his name was dragged through the mud in a tawdry extortion and sex scandal fit for a Lifetime movie? Or when a Louisville graduate assistant entangled the program with escorts and recruits and every critic was quick to say Pitino should have known what was happening on his watch?

The NCAA forced the Cardinals to vacate 123 wins and the 2013 national championship, and Pitino was cited for “failing to promote an atmosphere of compliance.”

“Personally, I’ve got to make amends with my family if I’ve done things wrong,” Pitino said this week. “Professionally, they know what I’m all about. They know that nothing being said has any semblance of truth at all. They’re fine with that. We’re a family that is very strong together. We don’t pay attention to that.”

Pitino said he’s long surrendered trying to defend his reputation in the wake of personal and professional transgressions at Louisville.

“My son gave me the greatest piece of advice,” Pitino said. “He said, ’Dad, all I can tell you is nobody cares if you’re innocent. You might as well stop saying it because nobody cares. Why don’t you do what you do best, coach, recruit and stop trying to defend your honor because nobody believes you.'”

Richard Pitino, introduced Thursday as coach at New Mexico days after he was fired at Minnesota, worked on his father’s staff at Louisville before he left to join Billy Donovan’s bench for two seasons at Florida.

“He wants to beat you at everything,” Richard Pitino said. “You don’t have 30 people who have worked for you go on to be head coaches and not be an unbelievable leader. I’ve learned a lot. I’ve continued to learn a lot.”

Donovan, now the Chicago Bulls coach, was the 3-point whiz for Pitino on that 1987 Providence team and later served as Pitino’s assistant and top recruiter from 1989 to 1993 at Kentucky. Pitino’s influence left an indelible mark on Donovan’s career and the two national titles he won at Florida matched his mentor’s.

“Outside of my mother and father, he’s been probably the most influential person in my life,” Donovan said. “I think a lot of people don’t get a chance to see his generosity a lot of times. But he’s an incredibly generous person.”

When coaching jobs at home dried up for Pitino, he did a penance of sorts in Greece, coaching Panathinaikos for two years.

“I wanted to coach at a New York school or a New England school, a small Catholic school was my goal to end my career,” Pitino said.

Led by guards Isaiah Ross and Asante Gist, the Gaels have won six straight games and are 16.5-point underdogs against Alabama.

“Maybe some guys haven’t believed in themselves before,” Gist said. “For him to take a chance on them and be around him, it built up their confidence.”

That matchup has a familiar feel for Pitino: Providence knocked off Alabama in a regional semifinal in the 1987 tournament.

Can Pitino do it again?

No one can really count him out -- he does have two national championships for a reason -- but that blast from the past comes with another reminder of how Pitino operates.

With vacancies at Indiana and UNLV, Pitino’s name has again swirled as a candidate to bolt and take a high-profile job.

“You could come to me with the greatest job on Earth and I would not consider it,” Pitino said. “I’m not going anywhere. If I go anywhere, it’s going to be retirement. And I’m not looking forward to retiring any time soon.”

So there you have it, Pitino’s not going anywhere.