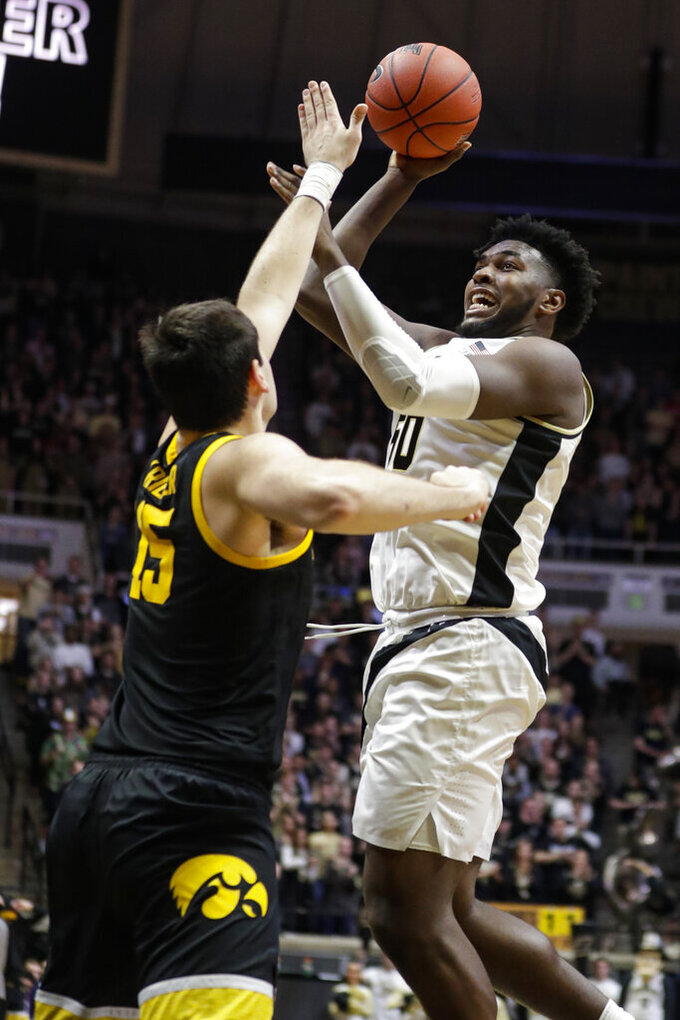 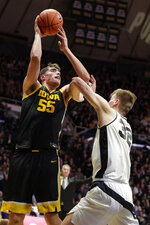 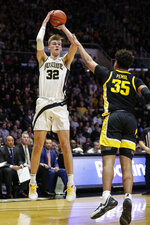 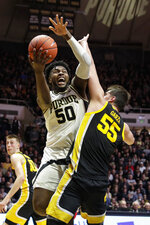 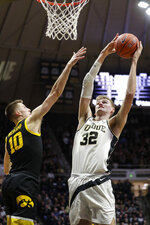 WEST LAFAYETTE, Ind. (AP) — Purdue got off to a fast start against a ranked opponent and never slowed down.

Evan Boudreaux scored a season-high 18 points to lead five Purdue players in double figures in a 104-68 rout of No. 17 Iowa on Wednesday night.

The Hawkeyes scored first on Luka Garza's basket, but then Purdue (13-10, 6-6 Big Ten) scored 17 straight points to lead for good.

“Coach (Matt) Painter emphasized the multiple efforts all week," Boudreaux said. "We knew we had to come out strong and give a lot of energy. It's tough for teams when you're giving up two, three, four shots in a possession, especially starting games.

"That's really demoralizing. The second half, I think we came out with a lot of energy and attacked them. So if we can start games and halves like that, we’ll be in a really good position.”

Boudreaux hit 7 of 9 shots and had a team-high eight rebounds.

Garza led the Hawkeyes (16-7, 7-5) with 26 points and was their only player in double figures. Garza was limited to one rebound, well below his 10.4 average entering the game.

Jahaad Proctor, Matt Haarms and Sasha Stefanovic each scored 15 points for the Boilermakers. Proctor made all six of his shots. Purdue's Eric Hunter Jr. added 13 points and a team-high seven assists.

“To see multiple guys shoot the ball well for us is a real confidence booster,” Painter said.

Purdue led by 39 points at one point.

“Our ability to make 3s was the real separation in the first half,” Painter said. “We had good execution. This game was an outlier for us as far as making 3s."

The Boilermakers had just two turnovers in the opening half and nine for the game. Iowa had 14 turnovers.

“The way they pounded us on the glass early, not that they don't do that, they do that to a lot of people, but you have to be better there," Iowa coach Fran McCaffery said. “What often happens, especially on the road, when you get behind is you try to get it all back at once. We needed more pace and to slow it down."

The Boilermakers went on a 9-0 run, including six points on Proctor's back-to-back 3-pointers, to push the lead to 39-18.

Iowa: The Hawkeyes are struggling on the road in the conference. They had won four of the previous five games, but all of those victories were at home. Iowa dropped to 1-5 in Big Ten road games.

Purdue: The Boilermakers had quite a night offensively after being held to 37 points in one loss and 50 in another setback last month and averaging 62 points over their previous two games.

Iowa will drop in the rankings after the lopsided loss. How much the team falls in the poll will depend on how the Hawkeyes do against Nebraska.

Purdue: Plays Indiana on the road Saturday, aiming for a sixth straight win in the rivalry.