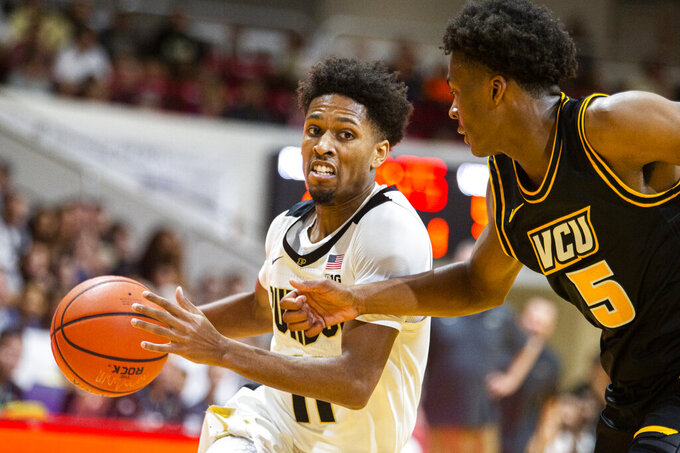 NICEVILLE, Florida (AP) — With both teams struggling from the free throw line, Purdue's Eric Hunter Jr. and Jahaad Proctor made foul shots when it counted and VCU didn't.

Hunter and Proctor also each scored 12 points to lead the Boilermakers to a 59-56 upset of the No. 20 Rams on Friday night in the Emerald Coast Classic.

The win put Purdue (4-2) in the championship game Saturday against Florida State and handed VCU (6-1) its first loss. The teams traded the lead 13 times and were tied 14 times in a ragged contest. It was not decided until a potential game-tying 3-point shot by VCU’s De’Riante Jenkins went wide with 4 second left. Hunter grabbed the rebound and it was all over.

Hunter also had given the Boilermakers the lead for good 56-55 with 1:37 left by sinking two free throws. Proctor then made three out of four free throws down the stretch.

Marcus Santos-Silva led the Rams with 19 points but missed three of four free throws in the final 1:16. No other VCU players scored in double figures.

Purdue coach Matt Painter was happy with the win but not how the Boilermakers got it.

"It lets you know you have work to do in some areas," Painter said. "I'm proud of our guys being able to grind it out."

Besides shooting only 65.5 percent from the foul line Purdue also committed 18 turnovers. VCU's free throw percentage was only slightly better at 68.2 percent but the Rams turned the ball over even more.

"We saw some things today that we have to get better on," said VCU coach Mike Rhoades. "There is no reason we should be turning the ball over 21 times."

The only other Boilermaker in double figures was Trevion Williams with 10 points on 5-for-5 shooting, but he fouled out with nearly five minutes left to play.

Purdue: Upsetting a ranked opponent is a relief for the rebuilding Boilermakers as their only other victories have come against Wisconsin-Green Bay, Chicago State and Jacksonville State, none with winning records. Purdue has an opportunity to gain additional momentum before facing defending national champion Virginia on Dec. 4 in the ACC-Big 10 Challenge by winning the tournament championship game against Florida State. The Seminoles knocked off No. 17 Tennessee on Friday. It will be a rematch for the Boilermakers, who lost to Florida State last season in the ACC-Big 10 Challenge. Then it’s on to Virginia, which eliminated Purdue from the NCAA Tournament last season with an 80-75 overtime victory in an Elite 8 game.

VCU: The upset loss to Purdue snapped VCU’s season-opening six-game winning streak and could threaten the Rams’ national ranking. It was the first time in school history that the Rams had been 6-0. That run included a signature victory over then-No. 23 LSU on Nov. 13. They’ll have an opportunity to get back on track, though, in the tournament consolation game against another nationally ranked team in Tennessee. It’ll be the Rams only remaining game against a Power 5 conference team during the regular season.

Purdue, like Florida State, has a strong bench. The Boilermaker reserves, led by Williams, outscored VCU's 26-9.

The game was only the second time Purdue and VCU have played each other. Their first meeting is part of VCU lore. The 11th-seeded Rams upset the third-seeded Boilermakers 94-76 in the second round of the 2011 NCAA Tournament on their way to their only Final Four appearance. They then lost to Butler, which was defeated by Connecticut in the title game.

Purdue advances to the tournament championship game on Saturday against Florida State.

VCU plays in the tournament consolation game on Saturday against No. 17 Tennessee.