Sharp-shooting Iowa gets 24 from Garza to beat Grand Canyon 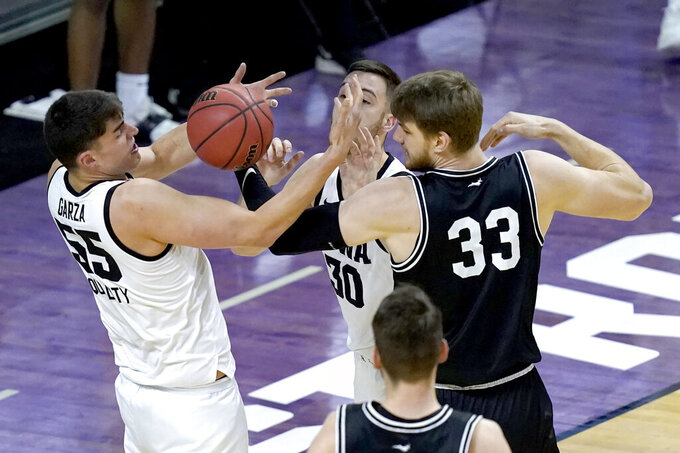 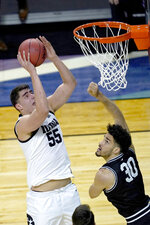 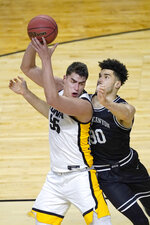 INDIANAPOLIS (AP) — Iowa watched as higher seeds dropped out of the bracket in an opening day of upsets in the NCAA Tournament.

The Hawkeyes avoided joining the list with an impressive shooting night and another dominating performance from their All-American.

Luka Garza scored 24 points and Iowa cruised into the next round with an 86-74 victory over Grand Canyon in the West Region on Saturday night.

“Watching all those games yesterday, I think we learned some lessons from those teams,” Garza said. “We knew what we were facing and that they weren’t just going to back down, so we had to keep fighting.”

Ohio State, Purdue and Tennessee were all bounced from the tournament on a wild opening day of upsets, but the second-seeded Hawkeyes (22-8) used a strong shooting display to advance.

Iowa shot the Antelopes and their boisterous fans back to the desert, hitting 54% from the floor while going 10 of 22 from behind the arc.

Joe Wieskamp added 16 points to help lead the Hawkeyes into the next round Monday against Oregon, which advanced after Virginia Commonwealth became the first team to bow out of the bracket due to a positive COVID-19 test.

“They shot the mess out of it,” GCU coach Bryce Drew said.

GCU chartered two planes from Phoenix for the Havocs, the school’s purple-clad student section, and they spent the game dancing and cheering in one end of Indiana Farmer’s Coliseum — socially distanced, of course.

Grand Canyon (17-7) gave the Havocs reason to remain on their feet early by keeping the Hawkeyes within reach before an Iowa surge before halftime allowed the Hawkeyes to pull away.

“For GCU, the first time in the NCAA Tournament, hopefully this will give the players a taste in their mouths, that they’re going to want to be successful and come back and work even harder," Drew said.

Grand Canyon won the WAC regular-season title in its first season under Drew and closed out the conference tournament with a blowout win over New Mexico State to reach the NCAA Tournament for the first time in eight years as a Division I program.

The Lopes arrived in Indy possibly needing a big shot like Drew hit against Ole Miss for Valpo in 1998 if they were going to have a chance against Iowa and Garza.

The multi-talented 6-foot-11 senior was perhaps even more dominating than he was a year ago when he averaged 23.7 points and 8.8 rebounds per game to earn first-team Associated Press honors for the second straight year.

He’s surrounded by shooters, so teams have to choose which option hurts less.

Garza got off to a great start, hitting a pair of 3-pointers while scoring eight early points. So the Lopes started collapsing in on him and hit a few of their own shots, lingering within reach like so many lower seeds have done so far this March.

The Hawkeyes kept dead-eyeing to start the second half, hitting 7 of their first 11 shots to stretch the lead to 17.

Iowa did what it was supposed to as a No. 2 seed with an impressive shooting performance.

Grand Canyon had its first taste of the NCAA Tournament and the Havocs had a road party. No win, but a great experience

Iowa will have a short turnaround before its next game to play a well-rested team.

Oregon hasn’t played since losing to Oregon State in the Pac-12 Tournament title game on March 13 and will have two extra days after VCU dropped out.

“This stuff happens,” Garza said. “Teams are going to get sick. It’s what happens. You have to be able to adjust, be ready for whatever happens.”

GCU’s student section is one of the liveliest in college basketball, filling nearly half the arena every game while bouncing, yelling and doing choreographed dances.

The Havocs were silenced most of the season during the pandemic, but made their presence felt in Indianapolis.

“Our fans are the best in the country — you saw a glimpse of that tonight,” Drew said. “Just imagine 4,000 students doing that the whole game and before the game. It will change your perspective when you go to a college game.”