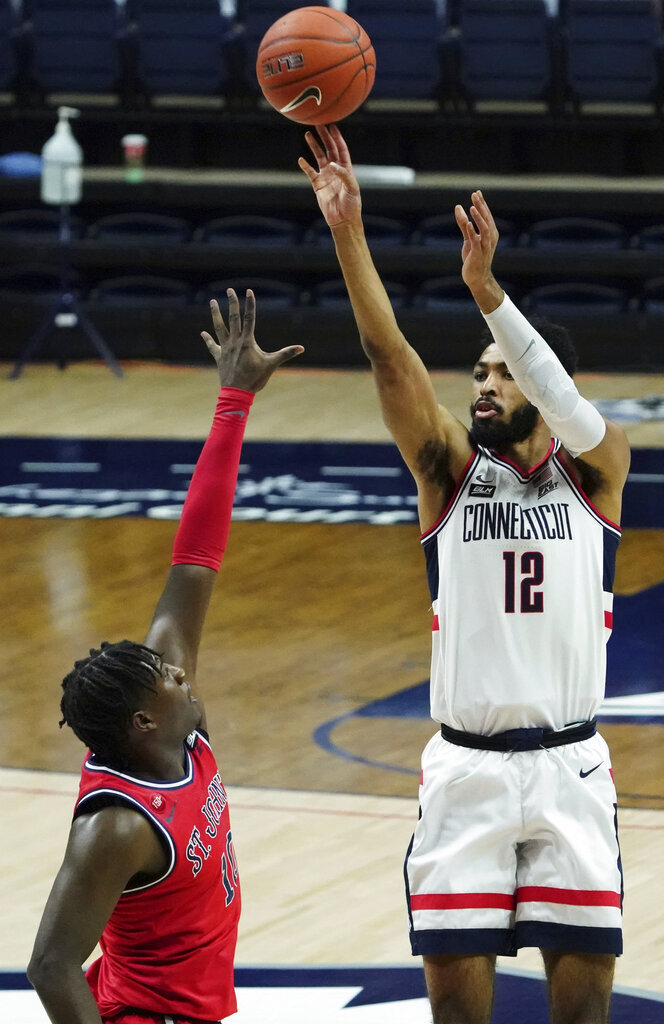 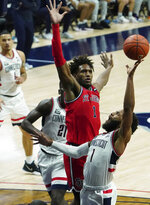 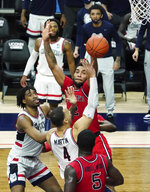 STORRS, Conn. (AP) — St. John's came into Connecticut looking for a confidence-building, perhaps season-defining win and got it.

Posh Alexander scored 18 points to lead five players in double figures and the Red Storm came from behind to upset No. 23 UConn 74-70 on Monday in the first meeting of the rivals since February 2013.

Marcellus Earlington scored 15 points and Julian Champagnie, the Big East's leading scorer, had 10 of his 12 points in the second half. Rasheem Dunn scored 11 points and Dylan Addae-Wusu chipped in with 10 for the Red Storm (8-7, 3-6) who won for just the second time in five games.

“I personally feel like we can beat every team in the country,” Alexander said. “It's just like now we're just coming together a little more.”

“You take one of the best players in the country off your team, that's going to cause a lot of problems when we don't have a lot of natural scorers," UConn coach Dan Hurley said.

UConn led by as many as 14 points in the first half and didn't trail for the first 33 minutes of the game.

The Red Storm chipped away and Alexander tied the game at 59 with a pair of free throws. A 3-pointer by Earlington gave the Red Storm their first lead, 64-62, with just over four minutes left.

Champagnie’s driving layup made it 71-67 with 1:17 left, and St. John's held off the Huskies down the stretch.

Martin’s 3-pointer from the right corner cut the deficit to 71-70 and the Huskies forced a tie-up under the basket to get the ball back. But Martin missed two foul shots that would have given UConn the lead, and Rasheem Dunn hit a free throw at the other end.

A long 3-pointer by UConn's Polley missed and Champagnie, who came in averaging just over 20 points a game, sealed the win with two foul shots.

“(Champagnie) had a rough night,” coach Make Anderson said. “But we've got the trust in him that he can make plays, free throws, I think defensively. I think that's the sign of a good player, when a guy can still have an impact on a game not scoring, not at his best.”

UConn held Champagnie to just two free throws in the first half. But Addae-Wusu picked up the slack. The freshman guard had 10 first-half points, hitting all four of his shots.

St. John's: The Red Storm's defense, which had been forcing an average of 18 turnovers a game, got 18 on Monday.

UConn: Hurley says the Huskies expect to be without Bouknight for about four weeks after surgery on Jan. 12 to remove bone spurs from his left elbow, which he injured while diving for a loose ball on Jan. 5.

Alexander was battling a tailbone injury but hit six of his 11 shots and was 3 of 5 from 3-point range.

“He didn't even practice yesterday,” Anderson said. “So for him to come out and have that kind of performance when it was needed says a lot about him.”

St. John’s guard Greg Williams Jr., who came in averaging better than 11 points per game, played just 5 1/2 minutes in the first half before leaving with an apparent back issue. He did not score.

St. John's: The Red Storm do not have another game scheduled until Jan. 27, when they visit DePaul.

UConn: The Huskies had been scheduled to host Xavier on Wednesday, but that game was postponed because of coronavirus concerns within the Musketeers' program. UConn's next scheduled game is Saturday at Creighton.