Texas and Smart fighting to get back to NCAA Tournament 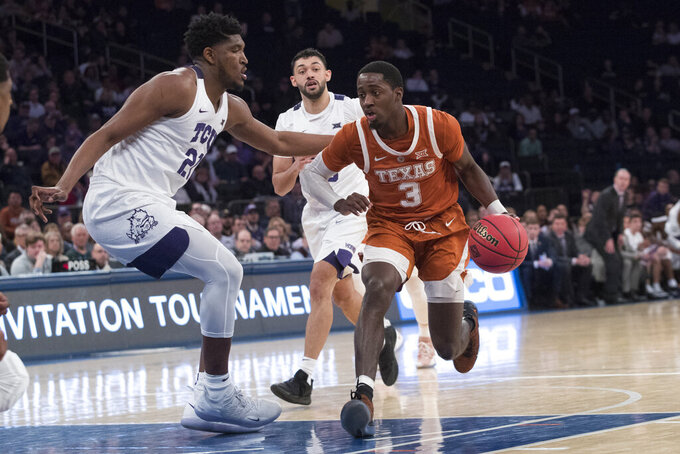 FILE - In this April 2, 2019, file photo, Texas guard Courtney Ramey (3) drives to the basket against TCU center Kevin Samuel (21) during the second half of a semifinal college basketball game in the National Invitational Tournament, at Madison Square Garden in New York. Texas' top three scorers and rebounders from last season are gone, but they return an experienced backcourt in point guard Matt Coleman and guards Jase Febres and Ramey. (AP Photo/Mary Altaffer, File) 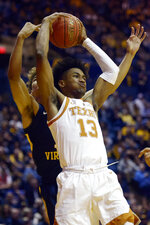 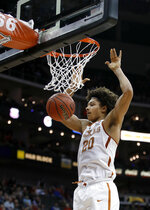 But it includes just two NCAA Tournament appearances — both first-round losses — and a losing season with all that pro-level talent. And that trophy? That was for winning last season's NIT , college basketball's other tournament, which Smart is counting on to give the Longhorns a bounce into the 2019-2020 season.

Smart called the NIT title, which required a run of a five straight wins, a huge confidence boost for a program that really needed one.

"We spent a lot of time in the spring talking about that stretch of our season. That was the most player-driven segment of our season," he said. "I think the biggest thing was they felt a sense of camaraderie and purpose to play for each other."

Smart knows, however, there's another step to take, even if he won't quite say it: The Longhorns need to make it back to the NCAA Tournament, which they have missed two of the last three years.

There's no sign from athletic director Chris Del Conte that this is a make-or-break year for Smart, who is 71-66 at Texas and has never finished higher than fourth in the Big 12, but the school would love to win more — a lot more — for the $3.3 million annual salary it pays him.

Texas is also poised to break ground on a new basketball arena that is scheduled to open in 2021.

The top three scorers and rebounders from last season are gone, but Texas returns an experienced backcourt in point guard Matt Coleman and guards Jase Febres and Courtney Ramey. Shooting guard Andrew Jones is "full steam ahead" and practicing, Smart said, but it's still unknown how much he can play or what he can do after missing most of the last two seasons while battling leukemia .

No player is projected to make an early departure to the NBA. That could be a boon for Smart if it creates more continuity in a lineup that desperately needs an anchor. But no one saw Jaxson Hayes taking a meteoric rise to the NBA last year, and then it happened.

"We knew his potential was phenomenal, but we didn't know he'd get better faster than anybody in the history of basketball," Smart said.

Texas lost arguably its best player midway through the 2017-2018 season when Jones was diagnosed with leukemia. He's fought a long, tough road to get back. Smart isn't ready to commit to just how Jones will fit into the lineup, but two years ago he was a dynamic playmaker and shooter and anything he can bring to Texas this year would be a bonus.

Junior forward Jericho Sims was supposed to be the breakout player last year, but was overtaken in the lineup by Hayes. His confidence suffered and he averaged a paltry 4.3 points and 3.6 rebounds last season. At some point, Sims will either deliver on the potential as wide as his broad shoulders, or he will lose out to incoming freshmen Will Baker and Kai Jones.

Despite long stretches of shooting struggles, Texas led the Big 12 with 325 3-pointers. But at a rate of 34.8%, their make-to-miss ratio was about average nationally. Febres made a team-high 89 shots from long range last season.

"We think Jase is as good a shooter as there is in the league," Smart said. "The key is creating high-quality shots. Those are easier to make."

Texas opens the season Nov. 5 against Northern Colorado and the Longhorns have early non-conference road matchups with Purdue, Georgetown and Texas A&M. The Longhorns also could face North Carolina in New York in the Wounded Warrior Project tournament in November. The Longhorns open Big 12 play at Baylor on Jan. 4. Texas likely needs at least eight wins before the start of Big 12 play if it hopes to have a chance at making the NCAA Tournament.