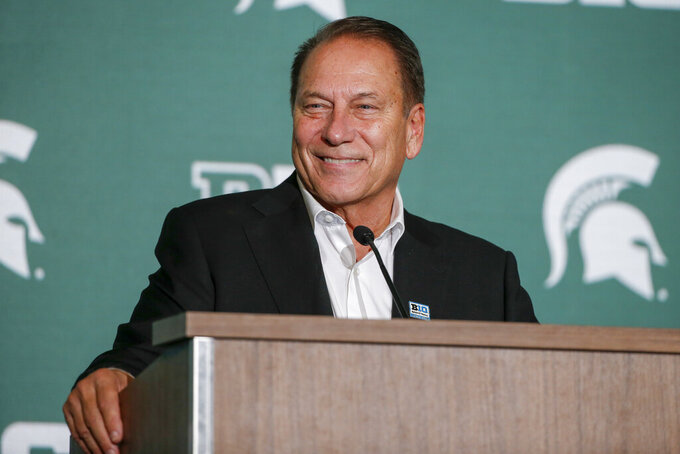 EAST LANSING, Mich. (AP) — Tom Izzo insists he has no plans to call it a career anytime soon.

The Hall of Fame coach, who turns 68 in January, is entering his 28th season in charge of Michigan State's program and his energy level hasn't missed a beat.

“When it’s time that I don’t enjoy it, when it’s time I can’t take a red-eye (flight) from Vegas to Orlando, it will be time to get out," Izzo said. “That is not where I’m at right now in any way, shape or form."

Izzo is running out of contemporaries.

Former Villanova coach Jay Wright surprised a lot of people by retiring at the age of 60 last spring, saying he lost “the edge” needed to continue coaching at a championship level.

Mike Krzyzewski left Duke at the age of 75 last spring, a year after after Roy Williams walked away at North Carolina at 70.

“I’m not quite as old as those guys," Izzo said.

The Spartans have had some success recruiting highly touted players for the future, giving Izzo a boost that continuing his coaching career is the right decision.

“I’ve got some things I’d like to accomplish as a coach for Michigan State, and our league," Izzo said. “We have to win another Big Ten championship. We meaning Michigan State, but we meaning the Big Ten."

The Big Ten has not had a school win a men's basketball national championship since 2000, when Izzo led the Spartans to a national title in one of his eight Final Four appearances.

Michigan State signed Izzo to a new, five-year rollover contract in August valued at $6.2 million per season, giving him about $2 million more each year.

The losses led to Izzo's team being unranked in the preseason poll in consecutive years for the first time since his first two seasons in 1996 and 1997.

Michigan State will be led by a quartet of players with a lot of experience: Joey Hauser, Tyson Walker, Malik Hall and A.J. Hoggard. They combined to average nearly 32 points a game last season, and may have to double that production to make the season a success.

“We have a great returning core group of guys," Hauser said.

Center Mady Sissoko, guard Pierre Brooks and guard Jaden Akins, who is expected to return soon from surgery on his left foot, also will be in the mix.

Izzo is not using all of the 13 scholarships available to him, and refused to tap into the transfer portal to at least add depth.

“I decided to stick with the people I have," he said.

That choice seemed to boost confidence for his players.

“It just shows his trust in us," Hauser said.

Michigan State has earned a spot in 24 straight NCAA tournaments, trailing only Kansas (32) among active streaks and North Carolina’s 27-year run from 1975 to 2001 all time.

Izzo will have a November to remember, though he may want to forget it.

In one week, the Spartans play No. 2 Gonzaga on an aircraft carrier in San Diego, No. 4 Kentucky in Indianapolis and No. 16 Villanova at home. At the Phil Knight Invitational in Oregon, they will face No. 20 Alabama along with possibly No. 21 Oregon and top-ranked North Carolina.

“I’m excited for what will be the greatest nonconference schedule in Michigan State history," he said. “And, maybe one of the greater ones than anybody’s played, if you ask me."

The Spartans will be the first team since at least 2009 to play two teams ranked in the top four and two other ranked teams in November, according to Sportradar.

Michigan State will wrap up the opening month of the season at Notre Dame, which like the Spartans, received votes in the preseason AP Top 25.

“We bit off more than we could chew," Izzo said. “We knew it. It was the opportunity to play in some games I didn’t want to pass up.”