Virginia rides big first half to 71-61 win over Louisville 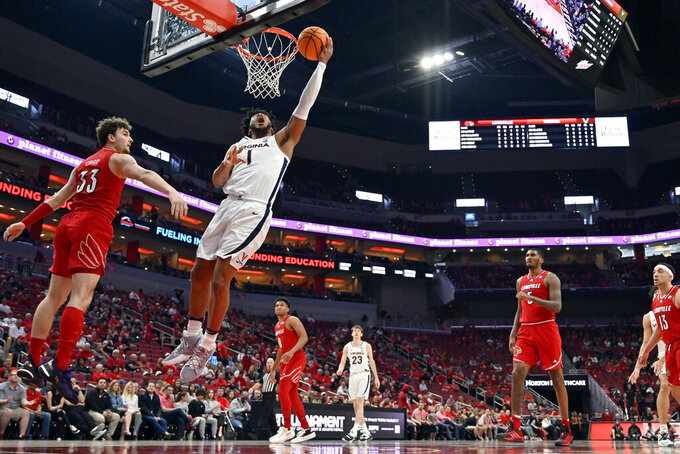 Virginia forward Jayden Gardner (1) goes up for a shot past Louisville forward Matt Cross (33) during the first half of an NCAA college basketball game in Louisville, Ky., Saturday, March 5, 2022. (AP Photo/Timothy D. Easley)

LOUISVILLE, Ky. (AP) — Reece Beekman posted a double-double, Kaden Shedrick carried Virginia to a huge first-half lead and the Cavaliers held on to beat Louisville 71-61 on Saturday in a regular-season finale.

Beekman had 15 points, a career-high 12 rebounds, five assists and five steals for the Cavaliers (18-12, 12-8 Atlantic Coast Conference), who secured the sixth seed to the conference tournament that begins Tuesday at the Barclays Center in Brooklyn.

Shedrick scored 16 of his career-high 20 points when he was perfect on seven shots from the floor to help Virginia build a 19-point halftime lead that the Cavaliers used to withstand a Cardinals surge in the second half.

Beekman had 15 points and Armaan Franklin 11 of his 13 in the second half. Kody Stattmann finished with 11 points.

Sydney Curry, a JC transfer, had season highs of 24 points with 14 rebounds for his third double-double this season. Malik Williams added 10 points for Louisville (12-18, 6-14), which lost its fourth straight.

Trailing by 19 at halftime, Louisville started the second half on a 12-3 run with 3-pointers by Mason Faulkner and Noah Locke. The Cardinals got within single digits when Locke hit a 3-pointer and Curry scored the next six points in a 9-0 run to trail 58-50 with six minutes remaining but didn't get closer than seven thereafter.

Virginia snapped a two-game skid and earned a season sweep after having beaten the Cardinals 64-52 on Jan. 24. The Cavaliers have won the last four meetings and 13 of the last 14.

Louisville scored the first eight points of the game before Virginia took over. After the teams exchanged buckets for a 10-2 Louisville lead, the Cavaliers outscored the Cardinals 34-7 over the final 15 minutes of the half for a 36-17 bulge. Shedrick had five dunks in the half and scored the final seven points in an 18-0 run.