West Virginia, others overcome obstacles to get to NCAAs 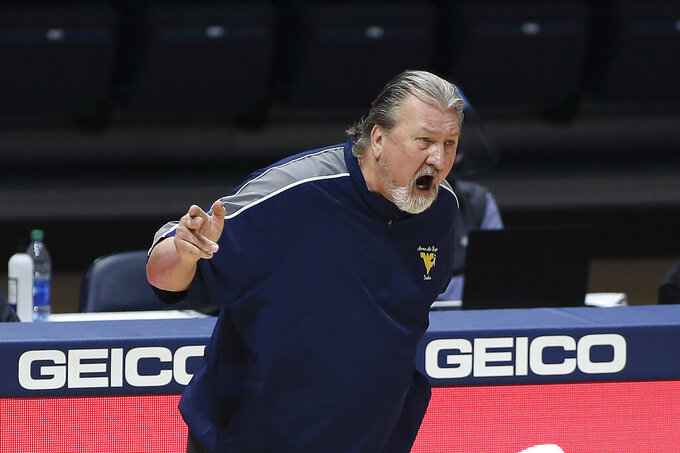 Two days apart in late December, West Virginia coach Bob Huggins got a double dose of bad news: A promising freshman was lost for the season with a torn Achilles tendon. Then one of the few five-star recruits in program history quit the team.

Huggins needed to make some fast adjustments. The ensuing roster tweaks helped the Mountaineers get through a rugged Big 12 season and has put them on solid ground entering the NCAA Tournament.

In a season full of adversity and challenges, in addition to dodging the usual stops and starts of the coronavirus pandemic, West Virginia didn’t just survive.

The Mountaineers (18-9) earned a No. 3 seed and will play 14th-seeded Morehead State (23-7) on Friday night in Indianapolis.

West Virginia wasn't alone in adapting on the fly. Look at Florida's resolve after losing Keyontae Johnson to a health scare, Drake losing two key players to injury in February or Ohio University pushing through a long pandemic pause to win the Mid-American Conference tournament.

The decision to quit by 260-pound Oscar Tshiebwe, one of the Big 12's top freshmen a year ago, wasn't as big a surprise to West Virginia as his production: Tshiebwe's scoring and rebounding were down compared to a year ago by the time he left.

Like Tshiebwe, 6-foot-10 freshman Isaiah Cottrell could attack the rim and was a solid passer. Cottrell gave the Mountaineers some valuable minutes off the bench before he got hurt.

West Virginia was 8-2 at the time. Huggins decided to use a group of talented guards along with redshirt freshman forward Jalen Bridges to spread out opposing defenses who otherwise had packed the lane trying to fend off the tandem of Tshiebwe and forward Derek Culver.

West Virginia allowed an average of seven more points per game after Tshiebwe’s exit, although that coincided with the conference schedule that included six ranked opponents.

“The reality is, is when Oscar left, we became a much better offensive team,” Huggins said.

Culver, with more room to roam without Tshiebwe, recorded 11 double-doubles. Bridges replaced Tshiebwe in the starting lineup and brought an outside scoring touch.

Sophomore guard Miles McBride became the team’s leading scorer, had a 3-to-1 assist-to-turnover ratio and tied for the Big 12 lead with 49 steals. Taz Sherman, a senior coming off the bench, more than doubled his scoring average from a year ago.

“I’ve got to give it to our coaches," McBride said. “They always have a plan for, honestly, anything. We came together as a team. Everybody knew they had to step up, top to bottom.”

Johnson, the Southeastern Conference preseason player of the year, collapsed on the court during a Dec. 12 game. The Gators postponed their next four contests and Johnson was released from a hospital 10 days later.

With Johnson out for the season, the Gators went 11-8 the rest of the way. Sophomore Tre Mann took over the team scoring lead, including four of his top five performances heading into the NCAA Tournament.

Mann's role "has continued to grow here over the course of this year, and he continues to get better,” Florida coach Mike White said. “Hopefully, he can finish really strong.”

The Hokies have had plenty of their own ups and downs. They've played just three games over the past five weeks due to COVID-19 issues.

Backup guard Cartier Diarra, a Kansas State graduate transfer, opted out of the season due to COVID-19 concerns. Second-leading scorer and rebounder Tyrece Radford served a four-game suspension after a January arrest. Jalen Cone has not played since a Feb. 6 ankle injury.

For Ohio, the problem wasn’t a grueling stretch of games, but simply a lack of them.

With fresh legs, the Bobcats won their first MAC championship since 2012 after playing three times over 36 days prior to the league tournament due to pandemic-related postponements or cancellations.

“The most proud I am of this group is their character, what they’ve been able to go through in the last month-and-a-half to get to this point,” Ohio coach Jeff Boals said. “This group is going to have a memory of a lifetime now.”

“For both of them, it’s their greatest basketball memory,” Vander Plas said. “To be able to do it with this team, I’m just so excited.”