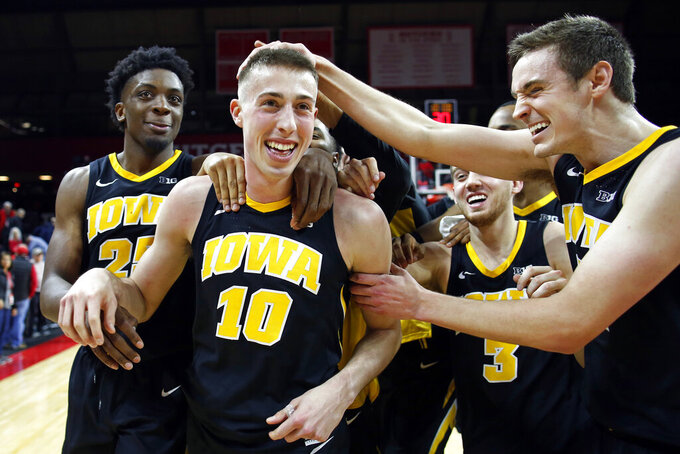 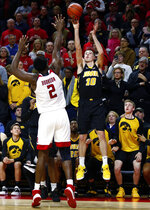 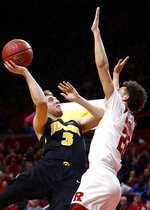 PISCATAWAY, N.J. (AP) — Iowa is living by the last-second shot these days.

Joe Wieskamp banked in a 3-pointer from the corner with less than a second to play and the No. 21 Hawkeyes (20-5, 9-5 Big Ten) won their fourth straight game with a miraculous 71-69 win over Rutgers on Saturday.

The game-winning shot came less than a week after Jordan Bohannon nailed a 23-foot, 3-pointer in the final second to beat Northwestern 80-79 last Sunday.

"You are thrilled for your guys that they are competing and staying together and they are staying connected and overcoming," Iowa coach Fran McCaffrey said. "A couple of guys had off games. Last year if guys had off games we could not win. Now we can and that's great to see."

The Scarlet Knights appeared on the verge of their second upset of a ranked team this season when Gio Baker got a friendly role on a 3-pointer from the top of the key with 3.3 seconds to play to put Rutgers (12-13, 5-10 Big Ten) ahead 69-68.

After Iowa called a time out, Connor McCaffrey threw a length of the court pass that Rutgers' Eugene Omoruyi and Iowa deflected. The ball went to Wieskamp in the corner next to the Hawkeyes' bench and his off-balance, high-arching shot hit off the top left-hand corner of the backboard and went in the basket, setting off a wild celebration on the Iowa bench.

"I wound up being in the right place at the right time," said Wieskamp, who finished with nine points after battling a back problem. "I got it and knew I had to get it up quick and I was able to make it."

With a sheepish giggle, the freshman guard said he didn't call "bank."

The problem for Rutgers was Wieskamp topped him with an unbelievable shot.

"If he shoots that shot a million times, that's the only one that's going in," said guard Ron Harper Jr., who scored 16 points for Rutgers. "He makes a bank shot over a 7-footer in the corner so, you know, it's just a lucky shot. But we'll see them again in two weeks."

Isaiah Moss added 17 points and Tyler Cook had 12 for Iowa.

Omoruyi added 10 and Montez Mathis had eight, but his missed three free throws in the final 1:47.

Rutgers led the majority of the first half and went to the locker room with a 33-32 lead.

The Hawkeyes turned the ball over 10 times in the opening 20 minutes and were 3 of 12 from long range. Moss was the only consistent scorer for Iowa, hitting 5 of 8 for 12 points.

Iowa: This is Fran McCaffrey's fifth 20-win season at Iowa and the Hawkeyes are headed to the NCAA Tournament for the first time since 2015-16. Iowa is coming off a sub- .500 season.

Rutgers: Tough loss for Rutgers' Steve Pikiell. This would have been his sixth conference win, matching his total for his first two seasons here. They beat Ohio State earlier this season when the Buckeyes were ranked. "They hit a bank three at the buzzer," Pikiell said. "That's a tough way to lose. I love the way our team played. There are better days ahead for us. We're going to get one of these games."

Iowa: Host No. 24 Maryland on Tuesday.

Rutgers: At No. 11 Michigan State on Wednesday.