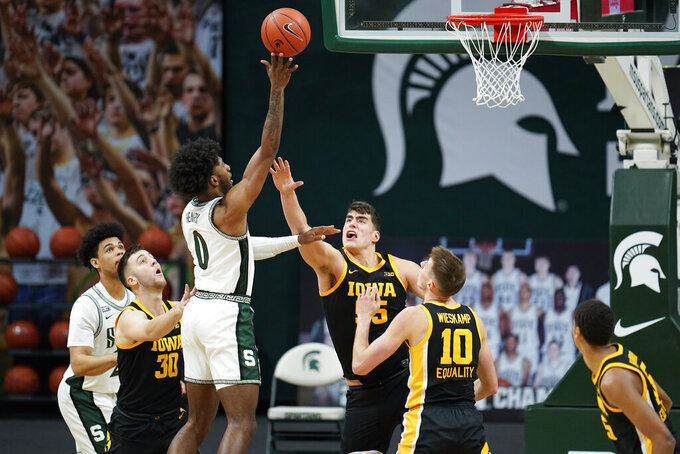 EAST LANSING, Mich. (AP) — Luka Garza had his worst game offensively in two-plus years and No. 15 Iowa still had enough from the rest of its team to rout Michigan State 88-58 on Saturday.

The Hawkeyes (15-6, 9-5 Big Ten) had three players score in double figures and Garza wasn’t one of them, showing future opponents that focusing so much on him is not a formula for success.

Garza’s teammates more than made up for the star senior being held to eight points, well below his 20-point average, and missing 8 of 11 shots from the field. The Spartans swarmed around the 6-foot-11 center when he had the ball in the post, leaving his teammates open on the outside, and they took advantage.

Joe Wieskamp scored 21 points, Jack Nunge matched a career high with 18 points and Connor McCaffery added 16 points for the Hawkeyes. The trio combined to make 10 of 15 3-pointers, helping the team connect on 13 of 25 shots beyond the arc after the defense collapsed on Garza.

“He drew guys and passed it when he needed to," Nunge said.

The staggering Spartans (10-8, 4-8) are in danger of missing the NCAA Tournament for the first time since 1997.

Michigan State started the afternoon hoping to earn a quality win against a team it lost by just six points to earlier this month. It walked off the court disheartened by the most lopsided loss in coach Tom Izzo's 26-year career in charge of the program.

And if the Hawkeyes didn't show mercy, they might have challenged Indiana's 52-point win in 1975 that stands as the largest margin of defeat at home for the Spartans.

Michigan State's Gabe Brown had 15 points, Aaron Henry scored 13 points and Joshua Langford added 11 points for a team that has to close the season strong to have a shot to play in college basketball's showcase.

“We still believe we can make this run and we’re going to," Brown insisted.

Iowa led 46-26 at halftime after making 8 of 13 beyond the arc. The Spartans briefly put up a fight in the second half, pulling within 15 points before the Hawkeyes had their way at both ends of the court to win at the Breslin Center for the first time since 2016.

“Today was an ambush," Izzo said.

Iowa: Teams can throw the kitchen sink at Garza, as Izzo said his team did, and not beat the Hawkeyes. He scored at least 16 points in every other game this season. Garza had his lowest total since scoring nine points on Nov. 29, 2019, against San Diego State. He was a sophomore the last time a Big Ten team held him to single digits.

Garza, though, celebrated the win without hesitation.

“What’s really impressive for me was how happy Luka was in the locker room," coach Fran McCaffery said.

Michigan State: Izzo was in his second season the last time he didn't coach in the NCAA Tournament, and the next time might be next month.

“We know what our goal is and what we have to do," the Hall of Fame coach said.

Spartans guard Rocket Watts was held out of the second half for health and safety precautions, the school said, after he had three points on 1-for-5 shooting over 10 minutes.

Watts was put in isolation at a nearby hotel, following COVID-19 protocols.

Michigan State had two games postponed last month because of an outbreak within its program.

The Hawkeyes should move up in the Top 25 after routing Michigan State on the road and beating No. 25 Rutgers by 13 points earlier in the week. They fell out of the top 10 this week for the first time this season after losing to then-No. 7 Ohio State and Indiana.

Iowa: plays at No. 21 Wisconsin on Thursday night.

Michigan State: travels to No. 24 Purdue on Tuesday night.