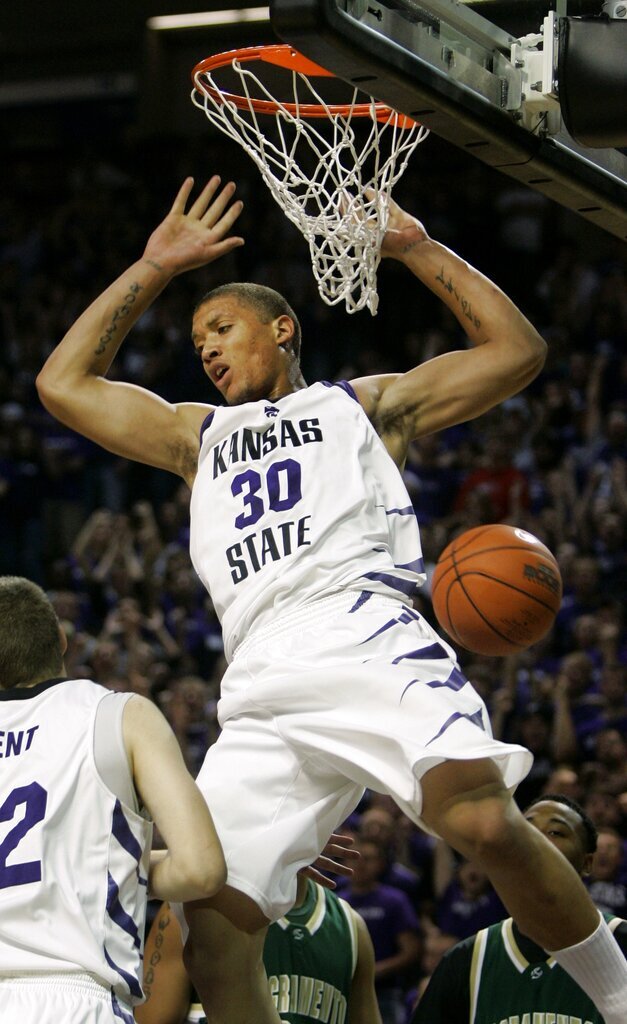 FILE - In this Nov. 9, 2007, file photo, Kansas State forward Michael Beasley dunks the ball during the first half of an NCAA college basketball game against Sacramento State in Manhattan, Kan. Beasley led all Division I players in rebounding (12.4) and ranked third in scoring (26.2) to earn first-team AP All-America honors his lone season at Kansas State. His 28 double-doubles that season remain the most ever by a Division I freshman. (AP Photo/Charlie Riedel, File) 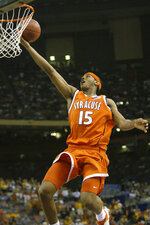 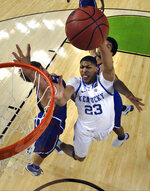 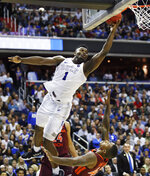 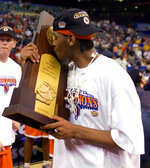 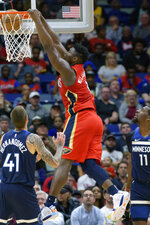 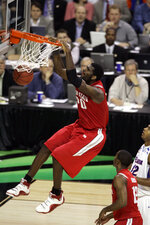 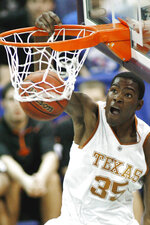 Anthony Davis didn’t need to score big to control a game for Kentucky.

He made that clear during the final performance of his freshman season. Coach John Calipari recalls the conversation Davis had with his teammates after struggling to shoot during the first half of the 2012 NCAA championship game.

“And I overheard him saying to his teammates, ‘I can’t make a shot. I don’t know what’s going on. You guys shoot the balls. I’ll get every rebound, block every shot and I’ll defend like crazy. Let’s just win this,'" Calipari recalled.

Davis shot 1 of 10 from the field that night but still was named the most outstanding player of the Final Four because of everything else he did as Kentucky won the national title. He had 16 rebounds, six blocks, five assists and three steals in the 67-59 victory championship win over Kansas.

With no Final Four this weekend because of the coronavirus pandemic, AP put together an informal list of the greatest one-and-done players in the history of men's college basketball. Davis and Syracuse’s Carmelo Anthony top the list, which is alphabetical, after leading their teams to national titles.

Davis averaged a team-high 14.2 points for Kentucky in 2011-12 despite ranking fourth on his team in field-goal attempts. He had 10.4 rebounds per game and 186 total blocks. He was the No. 1 overall pick in that year’s NBA draft.

Davis wasn’t considered a blue-chip prospect until a growth spurt of 7-8 inches in high school helped make him the nation’s consensus No. 1 player in his class.

Calipari recalled how Davis visited campus well before his enrollment and met Lee Todd, the University of Kentucky president at the time.

“He says, ‘This is one of the great kids I’ve ever met, I’m so excited,’ and he says, ‘You know what else, coach? He’s going to be here a couple of years. He’s so skinny there’s no way he can leave in a year,’" Calipari said. “I laughed, and I said, ‘Dr. Todd, you may be wrong on that front.’"

Anthony averaged 22.2 points and 10 rebounds to earn second-team Associated Press All-America honors in while helping Syracuse win the national title. He averaged 26.5 points and 12 rebounds per game in the Final Four.

The 10-time NBA All-Star provided the $3 million lead gift that led to the construction of the Camelo K. Anthony Basketball Center, a $19 million practice facility for the Syracuse men’s and women’s basketball programs.

“He was here just one year, but he’s stayed with us continuously," Syracuse coach Jim Boeheim said. “Obviously, the contribution made it possible for us to build the center, but he shows up, he comes up. He’s just very supportive of what we’ve done. He holds Syracuse in high regard, and that’s important.”

Beasley led all Division I players in rebounding (12.4) and ranked third in scoring (26.2) to earn first-team AP All-America honors. His 28 double-doubles remain the most ever by a Division I freshman.

“In the era of one-and-dones, you put his stats up against any of them and he’s by far the best one-and-done year of any of the guys out there from a statistical standpoint,” said South Carolina coach Frank Martin, who coached Beasley at Kansas State.

Beasley carried Kansas State to a 21-12 record and a round-of-32 appearance in the NCAA Tournament. Beasley, the No. 2 overall pick in the 2008 draft, averaged 12.4 points during his NBA career.

Durant averaged 25.8 points and 11.1 rebounds as a consensus national player of the year. He helped Texas go 25-10 with an NCAA Tournament round-of-32 loss to Southern California.

“His work ethic is second to none,” said Tennessee coach Rick Barnes, who coached Durant at Texas. “He was always a person that I would take the best clips I could find of (Michael) Jordan and LeBron (James) and Kobe (Bryant) and show him those little subtle things those guys did, and he was like a Kodak camera, man. He could click it and almost make it part of his game instantly.”

Durant has gone on to become an NBA MVP and a two-time NBA champion. He made a $3 million donation to the University of Texas in 2018.

Oden averaged 15.7 points, 9.6 rebounds and 3.3 blocks for Ohio State and was picked No. 1 overall in the 2007 draft. Injuries caused the 7-footer to play just 105 career NBA regular-season games.

Oden earned his degree from Ohio State in May 2019. Oden says he now advises athletes for a financial education company. He played in the Big3 league last year.

“Dedicating my life to ball and then that not working out, it was kind of a reset,'' Oden said. “You kind of see, ‘OK, so what's next in your life?' If all you do is play ball, you never really figure out that next chapter of life after. I was kind of just thrown into that. Going back to school and getting my degree was something I had to do for me to go on a path and figure out what's next in life."

Williamson swept the national player of the year awards during his lone season at Duke.

Williamson helped Duke go 32-6 with a loss to Michigan State in an NCAA regional final. The New Orleans Pelicans selected Williamson with the top pick in the 2019 draft.

John Kekis in Syracuse, New York, contributed to this report.