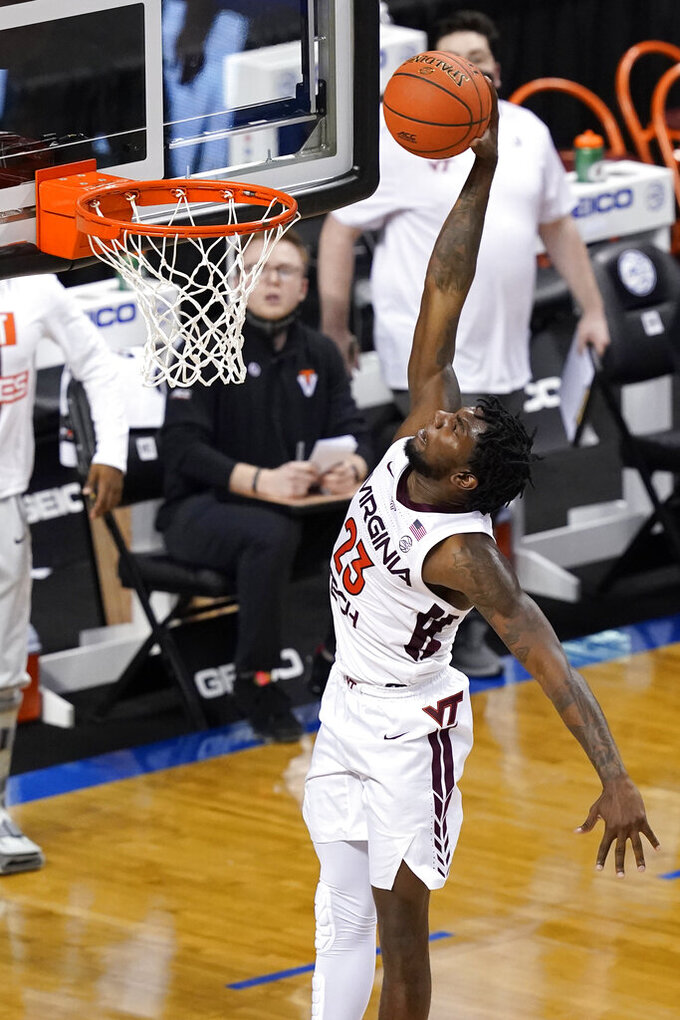 Virginia Tech guard Tyrece Radford (23) dunks during the second half of an NCAA college basketball game against North Carolina in the quarterfinal round of the Atlantic Coast Conference tournament in Greensboro, N.C., Thursday, March 11, 2021. (AP Photo/Gerry Broome) 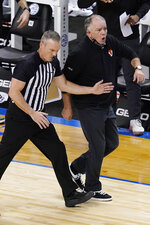 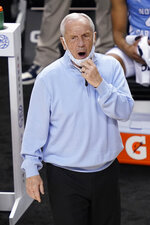 Once they did that Thursday, the Tar Heels wrestled control of a physical game away from No. 22 Virginia Tech in the Atlantic Coast Conference Tournament.

Armando Bacot had 17 points and 13 rebounds to help UNC beat the Hokies 81-73 in the quarterfinals, a win that came only after a second-half surge built on the Tar Heels finally getting to the glass.

It wasn't until Bacot led that effort that the sixth-seeded Tar Heels (18-9) earned a semifinal matchup with No. 15 Florida State. He scored 13 of his points after halftime, including a run of 10 in a row as UNC used a 11-2 run to break a 49-all tie. Bacot’s flurry included three second-chance baskets, the last a putback of a missed Caleb Love drive for a 68-58 lead near the 5-minute mark.

“I think they got bigger, if that's possible, at the half,” Virginia Tech coach Mike Young said.

“He knows how to get under my skin,” Bacot said of Williams' halftime push for more effort, adding: “He just uses the word soft a lot, and I don't like when he's saying it.”

Justyn Mutts scored a season-high 24 points on 10-for-16 shooting for the third-seeded Hokies (15-6), who were playing their first game since Feb. 27 after having their last two regular-season games canceled due to contact tracing.

Tyrece Radford added 20 for Virginia Tech, which shot 47% and made 8 of 18 3-pointers. But the Hokies went from allowing just two offensive rebounds and two second-chance points in the first half to letting Bacot and Day"Ron Sharpe get loose on the glass as the game wore on.

“You combine some conditioning issues and then you're banging with — it's like they've got seven people,” Young said. “That's hard. My guys did everything they could. We just didn't have quite enough to win it.”

UNC: The Tar Heels entered after lopsided wins against rival Duke and Notre Dame, with Wednesday's 42-point margin against the Fighting Irish the program's biggest in any ACC Tournament game. Things were tougher in this one. It helped that freshman guard RJ Davis had 14 of his season-high 19 points after halftime — including three of his four 3-pointers — to complement the Tar Heels' work inside.

Virginia Tech: The Hokies had played just twice in five weeks but were effective offensively and in keeping the Tar Heels off the glass for a half. The Hokies were trying to reach the semifinals for the first time since 2011 and fourth time overall.

“We’re not going to blame the loss on the pause or anything,” guard Wabissa Bede said. “That was just us. We were very capable of winning that game regardless. Next time we will.”

It marked Williams’ 903rd career victory, breaking a tie with Bob Knight for third on the Division I men’s list to trail only Duke's Mike Krzyzewski and Syracuse's Jim Boeheim.

Former Connecticut coach Jim Calhoun, now at Division III St. Joseph's, has won 873 as a Division I coach and 917 overall.

UNC: The Tar Heels face second-seeded Florida State in Friday's semifinals. The Seminoles advanced when their quarterfinal matchup with Duke was canceled after the Blue Devils withdrew due to a positive COVID-19 test within their program.

Virginia Tech: The Hokies will wait to learn their NCAA Tournament seeding.

This story has been corrected to show that Jim Calhoun is the former Connecticut coach now at Division III St. Joseph’s, not Jim Boeheim.