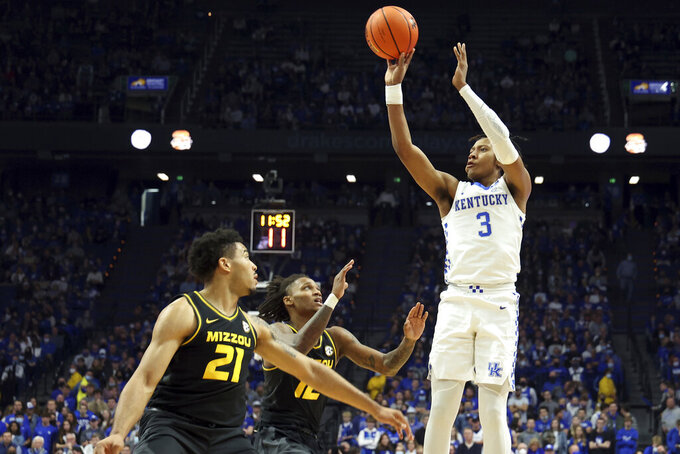 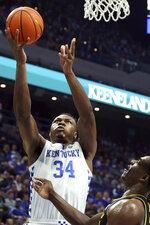 Brooks scored 17 points, TyTy Washington Jr. added 14 and No. 18 Kentucky overcame an uneven second half to roll past Missouri 83-56 on Wednesday night in the Southeastern Conference opener for both schools.

The Wildcats (10-2) trailed just once early on against a Tigers squad playing without head coach Cuonzo Martin, who missed the contest with COVID. But Kentucky had to offset 38% percent shooting in the second half and some ragged stretches to pull away from Missouri (6-7) after consecutive blowouts over North Carolina and Western Kentucky.

Brooks provided the needed cushion with several key baskets after the break, including a couple of dunks during the Wildcats' 7-2 spurt for a 59-45 lead with 9:23 remaining. Kentucky soon followed with 10 straight points to make it 73-52 and eventually improve to 14-2 against Mizzou and 8-0 in Lexington.

“With me, it’s just a matter of just continuing to play hard, not worrying about what could happen, what might happen, just play hard and bring energy," Brooks said. "The ball finds energy, so that’s really what happened.”

Brooks did have one flat stretch after halftime that led Kentucky coach John Calipari to pull him briefly. The point was made and the veteran responded with the same effort his coach considered necessary against the aggressive Tigers.

“Here’s what I love, how we started the game," Calipari said. "The energy we started with, who we are, how we run. And if you play the way we’re playing, where you’re picking them up and you’re running at some point, if a team’s not used to playing that way, there’s going to be a gap.

Amari Davis and DaJuan Gordon had 10 points each for Missouri, which dropped its fourth in six games. The Tigers were beaten 36-28 in the paint and 25-10 in fast break points. Their bright spot was outscoring Kentucky’s bench 34-20.

“I think our guys came out to perform, especially early in the first half," acting Tigers coach Cornell Mann said. “Then in the second half, we obviously lost momentum. I thought we had some silly fouls that take a little bit of air off the ball for us, and it doesn’t allow you to be as confident and play with as much confidence as you would normally play.”

Kentucky shot just 43% overall but Brooks' 7-of-11 shooting, including two of its first three baskets, was the bright spot. The junior forward also had nine rebounds. Washington was 6 of 13, while Oscar Tshiebwe made 9 of 10 free throws for 13 points while grabbing 20 boards. Sahvir Wheeler had 11 points and nine assists.

Both teams made just five 3-pointers each on 42 combined shots, including 25 by the Tigers.

Missouri appeared on the verge of being run out of Rupp Arena several times before warming up offensively with 14-2 run to get within single digits in the second half. The Tigers then went cold, missing 13 of their final 17 attempts to finish 33% from the field.

Kentucky started fast before cooling off in the second half, making just 27% during one stretch. The Wildcats offset that with solid defense that forced 14 turnovers leading to 21 points. They also won despite dishing out just 12 assists on 28 baskets.

Kentucky hosts Tubby Smith-led High Point on Friday in a non-conference game where the former Wildcats coach will have his name placed among the Rupp Arena rafters. Smith led Kentucky to the 1998 NCAA championship.