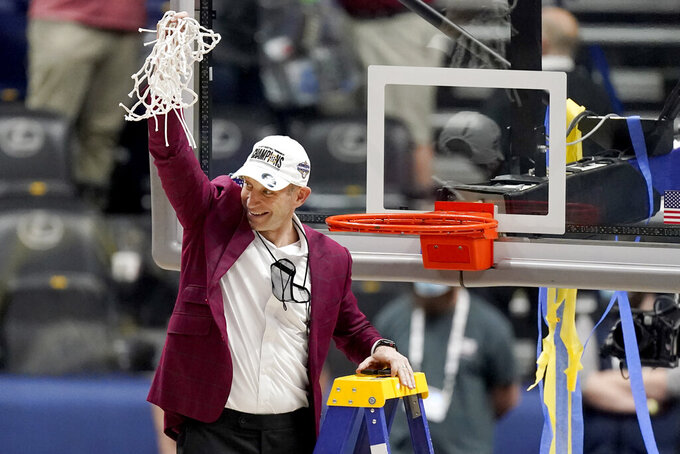 Nate Oats didn’t just speed up Alabama’s playing style by urging his players to put the pedal to the metal whenever they got the chance.

The fifth-ranked Crimson Tide’s second-year coach also mashed the accelerator in lifting the program from the doldrums of recent seasons into Southeastern Conference champions and a No. 2 seed in the NCAA Tournament. Oats did it with an up tempo style and by adding key pieces to a team that already had some talented players on the roster.

As he readily admits, “When we came here, the cupboard wasn’t bare.”

It is still a rapid ascension for the Tide (24-6), which followed up its first SEC regular season title in 19 years by winning the league tournament for the first time since 1991. Alabama matched the program’s highest NCAA seed — also earning a No. 2 seed in 1987 and 2002 — and faces Rick Pitino’s Iona ( 12-5) on Saturday.

It’s a marked turnaround for a program that had struggled to turn the corner under Anthony Grant and ex-NBA player and head coach Avery Johnson. But also from last season, when Alabama went 16-15 even with eventual NBA lottery pick Kira Lewis Jr. at point guard.

This team has already added 10 wins without Lewis.

Under Oats’ tutelage, former defensive specialist Herbert Jones has emerged as the SEC’s player of the year as well as its top defender. He and fellow senior John Petty Jr. stuck around after exploring entering the NBA draft. Senior Alex Reese also remains as a key role player.

They’re all holdovers from Johnson’s 2017 recruiting class that was ranked eighth nationally by 247Sports but couldn't turn things around in time to save his job.

“We stayed with it." Jones said. “I don’t think many guys could go through what we went through and come out on top like we did this year."

Sophomore Jaden Shackelford, who actually signed while Johnson was still Alabama's coach, is the team’s leading scorer at 14.2 points per game. But Oats has also built depth with transfers like former five-star recruit Jahvon Quinerly (Villanova) and Jordan Bruner (Yale) and Keon Ellis (junior college), along with freshman Joshua Primo.

The result is a team that fits the template that put Oats on the map at Buffalo, relying heavily on speed and 3-pointers from every position. And one that Quinerly believes “can take the NCAA Tournament by storm.”

“I have full faith if we lock in and do what we’ve got to do, we’ll be crowned again,” said Quinerly, who was the SEC Tournament MVP despite coming off the bench. “There’s more work to do.”

The math has checked out so far. Alabama’s big strides last season came offensively. Year 2 has been more about the defense.

No team has attempted more than Alabama’s 912 3-pointers this season. The Tide also ranks third with an average of 10.7 makes per game.

Eight Tide players have made at least 20 3-pointers, led by Petty, who Oats regards as one of the best shooters in the college ranks. Nine players average in double digits in minutes per game, which helped keep Alabama’s starters fresh during the SEC Tournament.

Ellis delivered big plays offensively and defensively in the 80-79 title game win over LSU. He replaced Primo, whose status remains uncertain with a sprained left MCL.

With the basketball team is still making headlines in March, a few months after the Tide won the SEC and national titles in football, Alabama is looking for the rare double-double. No school has won the league in both sports since Florida in 2006-07 on its way to dual national championships.

“Just to see our school do both things, in basketball and football, just tells about the school itself,” Petty said. “Just the way they recruit. Just the people we have around our school. It’s amazing. It’s kind of indescribable just because all of these things haven’t been done in so long.

They're hoping Alabama is far from done this season.