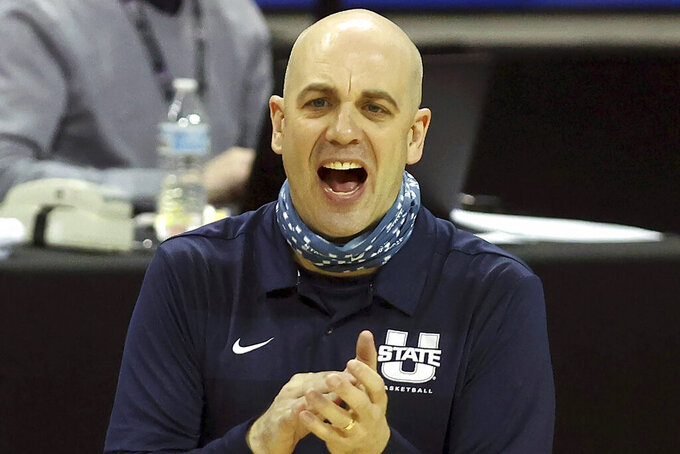 FILE- In this Friday, March 12, 2021, file photo, Utah State head coach Craig Smith reacts to a basket during the second half of an NCAA college basketball game against Colorado State in the semifinal round of the Mountain West Conference tournament in Las Vegas. Utah State and Texas Tech meet in a first-round game in the South Region on Friday. (AP Photo/Isaac Brekken, File)

The Utes said Smith will replace Larry Krystkowiak, who was fired this month.

Utah State won the MWC Tournament again this season and won 20 games before losing 65-53 to Texas Tech in the opening round of the NCAA Tournament.

Smith has been an adept recruiter in Logan, bringing in players like Sam Merrill, now with the Boston Celtics, and Portuguese big man Neemias Queta.

He previously coached four seasons at South Dakota before being hired by Utah State in 2018.

Utah State fired Krystkowiak on March 16 after he went 183-139 during 10 seasons in Salt Lake City.