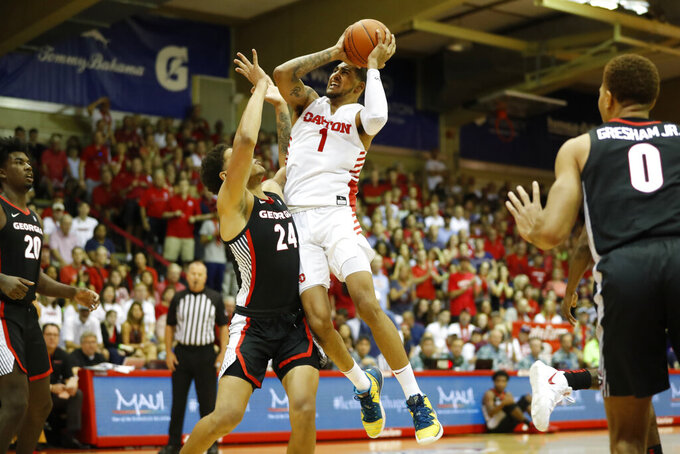 LAHAINA, Hawaii (AP) — Dayton’s plan was to get the ball inside early to open up the rest of the floor.

That meant getting the ball to Obi Toppin and he delivered.

Toppin dominated early while scoring 25 points, Jalen Crutcher added 20 and Dayton opened the Maui Invitational with an 80-61 rout over Georgia on Monday.

“We knew it was going to be an up-and-down game going back and forth, and so we wanted to try to establish a post presence early,” Dayton coach Anthony Grant said. “Obi did a good job of making himself available, his teammates did a good job of finding him, and he was able to get some conversions going and we kind of got in a rhythm there.”

Dayton (4-0) got off to a fast start in its fourth trip to Maui, building a 12-point lead in the opening five minutes behind Toppin. The Flyers stretched it to 18 by halftime and kept the Bulldogs at arm’s length by shooting 49%.

Toppin went 9 for 11 from the floor and made all five of his free throws.

Dayton, the 2003 Maui champion, will move on to face Virginia Tech.

Georgia (4-1) struggled with turnovers early in its first trip to Maui, digging a deep hole it never had a chance of recovering from.

The Bulldogs had 23 turnovers that led to 22 Dayton points and shot 4 of 16 from the 3-point arc.

“I knew we were going to be coming in against a whole different level of intensity, physicality, the way guys play,” Bulldogs coach Tom Crean said. “That's where we're at and we got exposed by that.”

Dayton got the season off to a flying start, winning its first three games by an average of 19.7 points per game.

Once in Maui, the Flyers jumped on Georgia through Toppin, making seven of their first eight shots during an opening 16-4 run.

A 6-foot-9 sophomore, Toppin used his length to go around and over the Bulldogs, scoring 14 points in the first five minutes.

Georgia began collapsing around Toppin and that opened the floor for the rest of the Flyers, who led 43-25 at halftime.

The Bulldogs also struggled offensively, turning it over 15 times and missing all seven of their first-half 3-point attempts.

“Just playing at this level, this intensity, the amount of fans that are into it, the pressure that's on to us — it's not really any pressure — but just what's at stake at this level, especially in this Maui Invitational, it's a first for all of us,” Fagan said. “Maybe we weren't used to that.”

Georgia’s good start to the 2019-20 season came to a screeching halt in paradise with a slow start and a rash of turnovers.

Toppin showcased his formidable skills on the national stage and the Flyers showed why they’re a popular mid-major pick to make a run in March.

Anthony Edwards was the highest-rated recruit in school history when he arrived at Georgia and lived up to the billing early in the season, averaging 19.3 points and 2.8 steals.

The 6-5 freshman found little room to operate against Dayton, scoring six points on 2-of-10 shooting, including 0 for 5 on 3s.

“The most important thing was to just try to stop No. 5 (Edwards),” Crutchfield said. “He is one of their best players, so we were trying to stop him and just play our overall defense, help each other out on the defensive end.”

Georgia will play the No. 3 Michigan State.